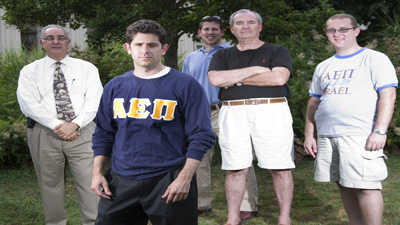 "Is 'anti-semitism' growing? Absolutely.
It's growing through small incident after small incident
that will result sooner or later in something big."
Paul offers an anecdotal view of how
Jews are perceived by others in society.
BY PAUL
(henrymakow.com)
I stared at my co-worker's arm. "What happened?" He had taken off his jacket. A deep furrow indented the forearm. He had been part of a demonstration in Ethiopia, he explained, when he was young. His tribe had been discriminated against. There had been Jews in the government. "They looked like us." A bullet had grazed him.
Fifteen years ago, I arrived in Toronto from the west. The most I had ever heard of Jews was from a European immigrant who spat out the words "dirty Jew" after describing a businessman.
Then there was the Jewish senior from Russia who upon being asked about long bread lines said, "What lines?"

As you know form our past exchanges I am Jewish. I read this article and kept thinking I wish I knew these people. Nothing has ever been handed to me. I have had to work my tale off to have the things i want in my life. I finally received my college degree in business after dropping out of school a decade earlier. It was not handed to me. I have taken on massive debt to acquire it. I earned it by my own fruits and labor.

I had no idea my fellow Jews had all these advantages. I never had a rich uncle in my family. I was raised middle class back in Brooklyn, NY. I have never used the fact that I am Jewish to help reach the top of my career. I have never felt like I was chosen because of me being Jewish. I have never felt that I was above my fellow humans.

All i want for myself is a successful life with a great woman and wonderful children to be part of the American Dream. I do not want to be judged differently because of my Jewishness. All I want is to please God and his son.

Paul stated, "The recession affected security so I went into retail and it was here that one encounters the Jewish customer."

This reminds me that Eustace Mullins once said "Have a nice day." is Jewspeak for "Death to the Gentiles." I don't know how true this is but I can remember the days when retail salespeople would say "Thank you." after a purchase but now they say "Have a nice day." so the customer winds up thanking the employee.

I spent two years in retailing so I consider the phrase a power ploy for the gratification of the employee. Knowing this, I say nothing in return. Occasionally, I'll get a rushed "Thank you." as I walk away.

There has definitely been some influence that has changed culture.