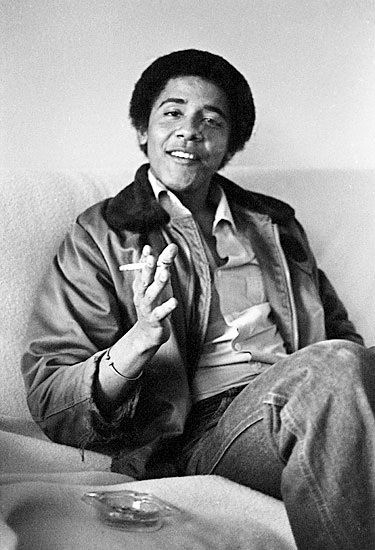 In this article, Victor Thorn makes the case that Barack Obama

was a CIA asset from his college years.

Our "leaders" may be actors (or MK-Ultra mind controlled slaves)

in a charade legitimized by the mass media.

This article is based on an interview with Texe Marrs which appears in The CIA, Tavistock institute, and the Global "Intelligence-Police Gestapo" State by Professor Eric T Karlstrom

The Kenya "Birther" Controversy was designed to divert the public from this fact.  Alex Jones interview with  Joel Gilbert, maker of film, "Dreams from my Real Father."

Obama was a red diaper baby. Admits Davis "schooled him."

When Obama first came on the scene, everyone was asking : Who is this guy and where did he come from?

His mother was a CIA cut-out who was recruited by various intel agencies in the late 1950's. The purpose was to infiltrate the Black Nationalists and the civil rights organizations that were forming at that time, such as the Nation of Islam, or Malcolm X, the Black Panthers, or even Martin Luther King. The "Powers that Be" had a lot of concerns about these. 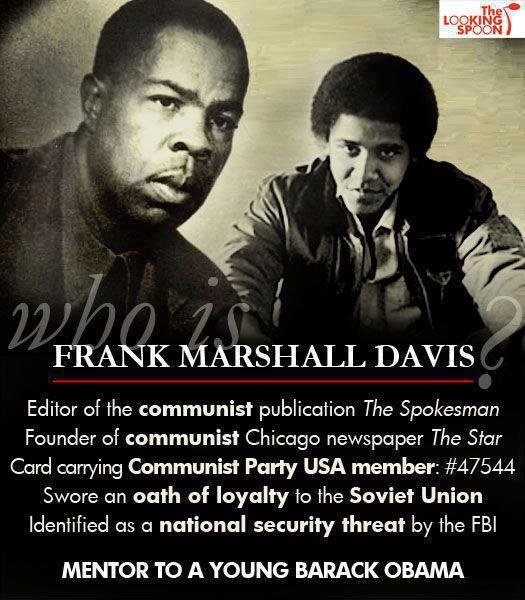 In my book, Front Man, the most important chapter "Who is Barack Obama's Real Father?" posits that Frank Marshall Davis, a member and founder of Chicago's Communist Party was Obama's real father. He had to flee to Hawaii after the heat got too heavy in the United States. Davis acted as a mentor.

And when you look at his mother at this time in Hawaii. Supposedly, she was some poor, single, divorced woman. But actually, during Barack Obama's formative years, she travelled to 13 countries and worked for two CIA "cut-out" companies. One of her employers at the Ford Foundation was Peter Geithner (the father of Tim Geithner, the former Treasury Secretary of the United States). So here was Barack Obama's mother working for Tim Geithner's father at the Ford Foundation.

Pastor James David Manning says that Obama was recruited into the CIA during his time at Occidental College in California. Why would the CIA want to recruit this guy who supposedly was just some kid from a broken home.... (Very similar to Bill Clinton). In 1979, the most pivotal event going on was the Soviet-Afghanistan war. The CIA wanted someone who had some familiarity with this world. So here we have a kid who spent a lot of time during his youth in Indonesia. Some people say he was actually a Moslem and he definitely understood the Islamic culture. So they wanted him to provide his assistance to the Mujahideen as a CIA logistics agent. So to get him out of Occidental College, they needed some cover because had spent two years there and people knew him. He couldn't just disappear. So they transferred him to Columbia University where no one knew him. 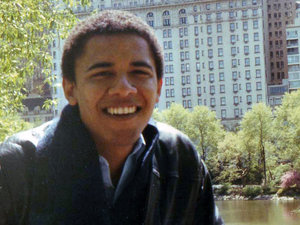 Who was a professor at Columbia then that might have taken him under his wing? The answer is Zbigniew Brzezinski, who was not only an expert on Russia, he was also associated with the CIA since the 1950's, he was co-founder of the Trilateral Commission with David Rockefeller; he was Jimmy Carter's National Security Advisor. And he wrote one of the most pivotal books at that time, called "The Grand Chessboard" which was really a blueprint for our later (2001- present) Afghani war. So, Zbigniew Brzezinski recruits Obama. And in 1981 and 1982, Obama travels between Pakistan and Russia.

In his biographies...Obama says that when he arrived in New York City from Occidental College, he was so poor that he didn't have enough money to even get a room. Yet, here he is traveling from the U.S. to Pakistan to Russia. It is also quite interesting that Bill Clinton, during his college days, also traveled, under the auspices of the CIA, to Russia also.

Deanna Spingola says that Obama was the lead agent in the arms and money and drug supply chain for the CIA-trained Taliban army in the war against the Soviets. And she says that Obama was one of the integral members in the Taliban's success. And if we remember, this war of Russia against Afghanistan became Russia's Vietnam and eventually led to the downfall of the Soviet Empire. So America had a lot invested in ensuring that the Mujahideen defeated the Russian army.

Obama also worked as a consultant for a company called Business International Corporation, a CIA cut-out. And again in his autobiographies, Obama does not mention this as his first real job. Anybody's first job is big deal in their lives. Why doesn't he mention it? Because it's a CIA company and he didn't want anyone trailing this.

So going back to the story.... In 1981, when he traveled to Pakistan, Pakistan was in severe turmoil, so badly that they actually imposed martial law. And there was a ban on people traveling from the U.S. to Pakistan. And we know that Obama was in New York City supposedly attending Columbia University at that time. Yet he was able to travel to Pakistan and by-pass this travel ban. How did he do it? He didn't have a U.S. passport. He had and used an Indonesian passport. So this all goes back to his birth status. Where was he actually born? Why doesn't he have a U.S. passport? Instead, he has an Indonesian passport. 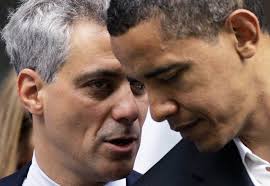 Now, Rahm Emanuel comes into this.  A lot of researchers claim that "Mega," this Mossad spy within the Clinton White House, was actually Rahm Emanuel, Obama first Chief of Staff.

Barack Obama is the "emptiest suit" of any President we've ever had, even more so than George W. Bush. I mean he's done nothing in his life. His highest real job was as a community organizer. I know he was in the Senate, but these are jobs that were set up for him, and they paved the way for him.

So he's a complete question mark. When you look at his past, when he travels to Pakistan, he's meeting with the Prime Minister of Pakistan, with the leader of the Northern Command, with ex-Soviet war veterans, with the people from the Mujahideen. So we have to ask ourselves, how is a 20-year old kid, a college student, meeting with some of the most important people in this war at this time? And he actually stayed with a man named Mohamadian Sumra, who was the interim Prime Minister of Pakistan, who is also tied in with BCCI, which is probably the biggest, dirtiest (CIA) banking scandal of all time. So how is this college kid, with no money, no resources, meeting with the highest people in Pakistan, in Afghanistan, and even Russians? It doesn't make sense unless you look at him as a CIA asset. That's the only thing that makes sense.

There is absolutely no evidence that Barack Obama was ever at Columbia University [between 1981-1983.] There's no transcript, no yearbook accounts, no work records, no housing records, no friends, no associates. A guy named Wayne Allen Wrote ... interviewed 400 people in Obama

's graduating class and he couldn't find a single person that knew Obama, saw him, or remembered him there at Columbia University. So not only have all of his college records at Occidental, Columbia, and Harvard been sealed and not released. His birth certificate records are also sealed and haven't been released. So what we have here with this guy is a huge question mark. If he wasn't at Columbia for those three years, where was he?

I have read many articles available on the internet that present evidence that Barack Obama's mother was a Jewish CIA asset and that the CIA has controlled Barack Obama's entire life. In view of evidence presented in Thorn's book, 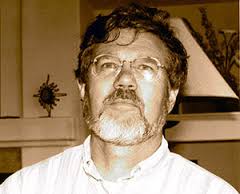 In view or information presented in my "Chapter 6: Mind Control: History and Applications" (on this website) it seems likely that Obama may be a victim of the CIA MK-ULTRA and Monarch (aka "Marionette") programs. In other words, he could be a mind-controlled slave. If so, he would probably have had the job of "courier" during these early years. Various books about Monarch slaves written by recovering victims, such as O'Brien and Phillips' "Trance Formation of America," indicate that these slaves have radically increased abilities to memorize, store, and deliver messages from political leaders, etc. (This way nothing is ever committed to writing). In this scenario, Obama proved his usefulness to the "crptocracy" (rule by secrecy) in his youth and has continued to be the (empty) mouthpiece of his CIA/Mossad handlers subsequently. There is an implication here that President Clinton might have also functioned in the same way, as a courier and mouthpiece for the "cryptocracy."

If so, how terribly, terribly, terribly monstrous and sad. I am reminded of the words spoken by the intelligence officer (played by Frank Sinatra) at the conclusion of the 1962 movie, "The Manchurian Candidate," when he finally understands the true nature of his profession and his government: "Hell, hell."

Add it up, dear reader. I'm afraid it does add up.... And the picture that emerges here is of a world-wide hierarchical network that employs diabolical methods (Satanic Ritual Abuse/mind control) to control its own "soldiers." Cathy O'Brien and Mark Phillips, book, "Trance Formation of America" as well as other books by survivors of government mind-control programs describes the dimensions of this shadowy, hidden world that is based on torture, terror and deception.

Falling back on the Christian worldview, which seems increasingly appropriate to describe the world system now in power, it seems that Satan, "the God of this world" and his legions are "black magicians." The only possible way they can defeat God and bring the souls of men and women to hell with him, again, is by employing magic, via deception, torture, and terror, to concoct a "false reality matrix." If we shine the light of truth upon the matrix and the diabolical inventors of these evil things and the Satanic superstructure will crumble. Meanwhile, this diabolical system is capturing millions of souls for perdition. Hence, we truth tellers must continue to try to expose and oppose these legions of the duped and the damned.

Related- The First Time I Heard the Name Barack

Every President since former CIA director George Herbert Walker Bush (Bush I) were tapped by the CIA in college. With Clinton it was through his earliest mentor/handler Arkansas US Senator William J. Fulbright.
With George Bush, it was his own father of course. Skull and Bones membership was his legacy birthright.

I've not studied Obama much at all. Seems clear Brzezinski groomed Obama. Back when Obama was given the Nobel Prize you may remember Henry Kissinger's remark:

I came across this video by Joel Gilbert a couple of years ago that I think nails Obama perfectly. Joel outlines the links Obama has to the CIA all the way back to his grandparents. Joel also claims Frank Marshal Davis is Obama's father. I hope all will take the time to view this video called "Dreams From My Real Father".