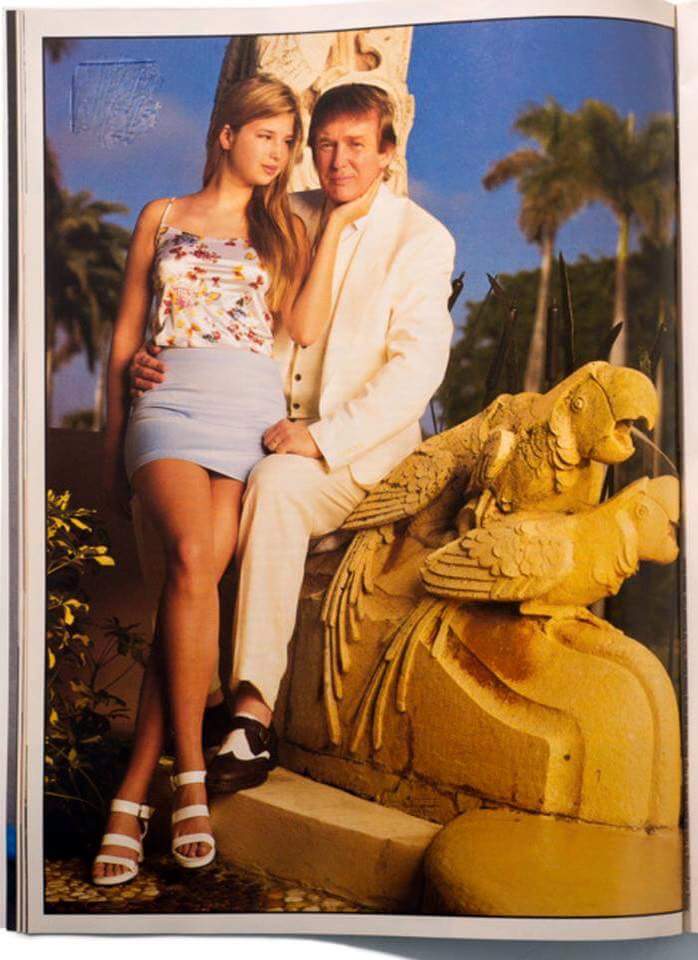 Trump with Ivanka in 1996, age 15.
Every candidate "must have their Panama" said The Protocols of Zion, referring to a scandal in 1888. "P" no longer stands for Panama. It stands for Pedophile.
This is why Trump will never prosecute Hillary or investigate 9-11. He likely participated in a pedophile sex ring run by Mossad agent Jeffrey Epstein in the 1990's. Below, Robert Morrow compiles some of the possible blackmail the Illuminati have on the conservatives'  Hope & Change 2016.
Disclaimer- Last night, Trump said many things Americans desperately want to hear, especially on jobs, public order, trade, manufacturing, immigration and regime change. However, there is a big difference between what a politician promises and what he actually delivers, especially if he is controlled like all other members of the Illuminati. 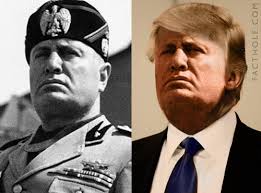 Trump parrots  Zionism's phoney terror narrative that justifies police state measures and increased military expenditures. I prefer him to Clinton but compare him to Reagan, who made some changes but left fundamentals intact. I would like to be wrong. He reminds me of a demagogue or even the dictator Mussolini who may also have been controlled by Illuminati. Many of his gestures are uncannily the same.
By Robert Morrow
Chairman, Travis County Republican Party
(henrymakow.com)
The Donald Trump child rape civil case is totally legit. The victim, raped at age 13 in 1994, has a WITNESS to Trump's crime and who used to recruit teen girls for mega-pedophile Jeffrey Epstein's parties. More witnesses may come forward. I wrote the Epstein chapter in www.clintonswar.com and I am convinced Trump is a violent child rapist.
Emily Shugerman interviewed Jane Doe, raped by Trump: http://www.revelist.com/politics/i-talked-with-katie-johnson/3573
"Defendant Trump tied plaintiff to a bed, exposed himself to plaintiff, and then proceeded to forcibly rape plaintiff," the suit, filed in New York District Court on June 20, said. "During the course of this savage sexual attack, plaintiff loudly pleaded with defendant Trump to stop but with no effect."
The court documents tell the story of a 13-year-old girl hired in 1994 to attend private sex parties in New York City. The parties were said to be hosted by billionaire Jeffrey Epstein, who was convicted in 2008 of soliciting prostitution from underage girls.
The suit also claims that Trump attended at least four of these parties. At each of these, the suit alleges, he initiated sexual contact with the 13-year-old. At one of them, he violently raped her.
The plaintiff, using the name Katie Johnson, originally filed the lawsuit in California. Johnson represented herself in that suit, but the judge threw it out for failing to make an adequate civil rights claim.
HuffPost Lisa Bloom on Donald Trump CHILD RAPE allegations
Proof comes later, at trial. But the November election will come well before any trial. And while Mr. Trump is presumed innocent, we are permitted - no, we are obligated -- to analyze the case's viability now.
I have done that. And the answer is a clear "yes." These allegations are credible. They ought not be ignored. Mainstream media, I'm looking at you.
Two prior women have accused Mr. Trump, in court documents, of actual or attempted sexual assault. (Mr. Trump denies all the allegations.)
Under oath, Ivana Trump accused Mr. Trump of a violent rape....Mr. Trump regarding a beauty pageant, he repeatedly propositioned her for sex and groped her, culminating in this frightening alleged incident.
The Billionaire Pedophile Who Could Bring Down Donald Trump and Hillary Clinton 6-30-16
Trump has denied Jane Doe's claims and his reps have said he barely knew Epstein--even though New York media in the '90s regularly chronicled his comings-and-goings at Epstein's Upper East Side palace, and even though Epstein had 14 private numbers for Trump and his family in his little black book. Meanwhile, Bill and Hillary Clinton have remained mum about their ties to the Palm Beach pedophile--despite evidence that shows Bill was one of the most famous and frequent passengers on Epstein's "Lolita Express" and that Epstein donated money to the Clinton Foundation even after his conviction.
Related
The dirt piles up
Affidavit of woman who says DONALD TRUMP raped her at age 13 in 1994 @ Jeffrey Epstein party
The butler of Jeffrey Epstein circled Donald Trump's name as a pedophile involved with underage girls.
Detailed Interview on Epstein Case
First Comment from Glen:
So, we have two major political party candidates who have a hankern' for sweet young innocent girls. One a man and one a woman. As with any elitist, they feel they are above the law and the rest of us are there for their entertainment. By now that should be of no surprise to anyone. How many times have we stood by and watched as these scum bags not only avoid prosecution, but even investigations into some of the worlds most heinous crimes. Many of those crimes on global scale. When will we learn that justice is just for us and never them? With that being said, they are still aware of the fact they are only safe as long as they do their masters bidding.
The technique of the "Honey Trap"(a stratagem in which irresistible bait is used to lure a victim.)is one that has been employed by Americas true rulers since the very start. Whether the trap is set up by the intelligence agencies or they simply learn of an earlier indiscretion or illegal activity of the one they want to control it makes no never mind. The end result is always the same. The political figure can be easily controlled and manipulated through blackmail(  Extortion of money or something else of value from a person by the threat of exposing a criminal act or discreditable information.) This explains how our politicians are ruled by "them" and not by "us".
I'll guarantee Hillary and Trump are both aware of the dark secrets in their past, and they are also aware of the fact that their true controllers know everyone of those deep, dark secrets. They know one wrong turn down the political path set for them could lead to their exposure and absolute demise.
I myself had no idea how deep the rabbit hole goes until I read a couple of books by two Project Monarch mind control survivors. If you want the truth, and are sure you can handle that truth I suggest you read.
1) Tranceformation Of America by Cathy O'Brien
2) Thanks For The Memories by Brice Taylor
For more on Hillarys rape of a young girl:
https://www.youtube.com/watch?v=6-4s1Pca5mU

In the movie The Hostile a very important scene takes place. A man is torturing a young girl and she asks why. He explains that once you have seen everything, been everywhere and done everything, what else is there ? This people with massive and incomprehensible amounts of money can have anything they want whenever they want it. Its not capitalism that creates these people, its crony capitalism, or socialistic capitalism. Boredom is a dangerous enemy. There was a book published on this topic a few years back, breaking it all down to boredom being our biggest problem. The rich are so easily corruptible.

With real free markets, fortunes are never secure, there is always a threat of competition.

The person that is alleging rape and accusing Donald Trump is probably not credible. Because there is no name attached to this person, an investigation into her background cannot be done. We do not know who she is or who is funding her. However, we can look at the journalist who is promoting this story.
Here are some facts:
1. Emily Shugerman, graduated from Occidental College in spring of 2015 with a BA in Politics.
Guess who else went to Occidental College in 1979 and was recruited by the CIA?
Barack Obama

2. Occidental College’s board and staff are predominately Jewish.
Emily Shugerman is Jewish…her father’s name is Richard P. Shugerman, a doctor in Seattle, Wa.

3. Shugerman did a student internship with Ms. Magazine prior to graduation.
Ms. Magazine was originally funded by the CIA and is probably still a CIA front.

4. Within a year of graduation, this young girl has been given access to a person who is accusing the Republican Presidential nominee of rape.

Connect the dots…. this ‘rape’ victim has some very shady and questionable support which makes her claims very suspicious…

Thanks for posting the article on Trump. I'm sick of people talking like he's a savior. It's time people realized- IF SOMEONE HOLDS POLITICAL OFFICE-
THEY ALSO RAPE CHILDREN. I doubt there are any exceptions