Rudolf Hess was Tortured "for Trying to End the War" 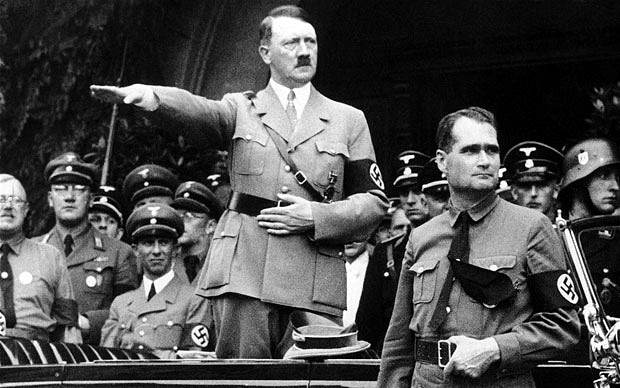 When the Deputy Fuhrer Rudolf Hess made his ill-fated peace flight May 10, 1941 he had no idea that his beloved Hitler was betraying him to lifetime imprisonment.
Instead of acknowledging that Hess was his peace emissary, and shaming Churchill into releasing him, Hitler disowned his old friend Hess as "insane."
Hitler wanted to get rid of the dupe Hess and clear the way for Martin Bormann, who like Hitler, was a British (i.e. Illuminati) agent.
For their part, the British did their best to drive Hess insane using sleep deprivation and poisons as he describes in this memo composed for the Nuremberg Trial in 1945. I have transcribed these excerpts from Bernard Hutton's Hess: the Man and his Mission, 1970 (pp.160-165)
by Rudolf Hess
(henrymakow.com)
I had been imprisoned for four years now wth lunatics, and had been at the mercy of their torture without being able to inform anybody of this, and without being able to convince the Swiss Envoy that this was so, not to mention my being unable to enlighten the lunatics about their conditions. It was worse than being in the hands of criminals, for, with them, there is some little reason in some obscure corner of their brain -- some feeling in some obscure corner of their hearts, and a little bit of conscience in them.
With my lunatics, this was 100% out of the question. But the worst were the doctors, who employed their scientific knowledge for the most refined tortures. As a matter of fact, I was without a doctor these four years because those who so called themselves in my entourage had the task of creating suffering for me and if anything, to make it worse....
However, what worry was this to the Jews?  They were as little worried about that as about the British King and the British people. For the Jews were behind all this -- if probability alone had not have argued for that, then the following would have....I was given reports by British Consulates about the treatment of Jews in Germany according to ... Jews.  [I was told I was being treated] "like the Gestapo treats their political enemies."
...It was typical of the Jews to claim that their enemies did what they did themselves. 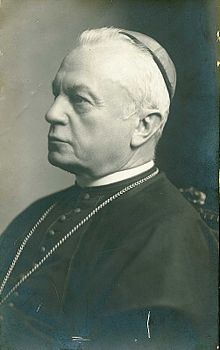 The Hungarian Bishop Prohaska , left, had found this already after the Bolshevik domination of Hungary in 1919. He reported that during that period whole truckloads of mutilated bodies were driven on to the bridges over the Danube in Budepest to be pushed over into the river; that priest had had their caps nailed to their heads, that their finger nails had been pulled out, and that their eyes had been gouged out, and the current joke was why should they go into the next world with their eyes open. All those responsible, with Bela Kun at the head, were Jews. The world press had been silenced. However, when, after the collapse of the Bolshevik government,  some of the guilty were to be judged, the same world Press cried out about the white terror in Hungary. It has always been like this, Prohaska concluded, whenever a people had to fight against the Jews...
If I asked myself what the reasons were for the crimes perpetrated on me, I suspect the following:  First, the British government had been hypnotized into endeavouring to change me into a lunatic so that I could be paraded as that if necessary, if they were to be reproached that they had not accepted my attempt at an understanding whereby England could have been spared many sacrifices.
Secondly, the general inclination of Jews or of non-Jews whom they whom they had gotten into their power to maltreat me and to revenge on me the fact that national Socialist Germany had defended itself from the Jews.
Thirdly, revenge on me because I had tried to end the war too early which Jews had started with so much trouble, whereby they would have been prevented from achieving their war aims...
Apart from the chemical that caused toothache, there was unmistakably a strong laxative and a poison that irritated the mucous membrane in the strongest possible manner. The last was responsible for my nose stopping itself up with congealed blood, that I had a hemorrhage in my mouth, and that my bowels burned like fire. The doctor could not hide his satisfaction when there were signs of a haemorrhage in my intestines.
They had been hypnotized to torture me until I became crazy and finally to kill me; to do everything in such a manner that nothing could possibly be proven and that my complaints could be explained by auto suggestion, at the same time expressing their regret about my suffering. Any pity was completely eliminated; while trying to achieve this aim my torture even gave them satisfaction....
---------------------------
Related-   Makow - Did Hitler Betray Hess and Germany?
Why Hess was Murdered
Makow Comment - It is typical of Cabalists to attack you but convince you that you are imagining it, or that in fact you are attacking them.  It's all a mind game. They are all about duplicity. The Devil is the "father of lies."  These are the people who control our media and educational system, not to mention the government.

"Masonic Jews are the source of all malcontent (ie â€œdebt/foreign invasion/poverty/inequality/political intrigue/corruptionâ€ etc), simply to use that as the excuse to go to war to topple prosperous monarchies and expand their zionist control:

WW1 was to eliminate Russiaâ€™s monarchy and establish the jewish socialist/soviet union.

WW2 was to eliminate Germanyâ€™s monarchy and establish Israel/the European Union (called the â€œleague of nationsâ€ back then) to permanently keep the German nation down.
And WW3, whose roots in my opinion began back in 1963 with the assassination of Kennedy and will culminate in the vision of shillary clinton's policies, is to topple American exceptionalism and establish the Israeli union over the conquered middle east.

And all this jewish/zionist control is upon OUR taxes because they are fundamentally SOCIALISTS (â€œNaziâ€™s/national socialists). Everyone in Europe knows that the EU is a giant socialist state where the bureaucrats live like kings on taxpayers while giving scraps back as â€˜grants/bailoutsâ€™ when its politically advantageous to them, using corrupt state apparatus to enforce the continued payment of taxes. And also notice that these nations never recover from the jewish socialist takeover. Look at Greece. Russia is now an oil oligarchy with huge Soviet sentiment. Germany is a marxist multicultural dump. And its now invading the US, UK, and Canada".

Another accurate accounting of the Satanic duplicity and demonic perpetraters that follow their jew / masonic dictates into oblivion.
With "24" Protocols presented in "1899" and now clearly fulfillec-2017 is their antichrist stooge presentation-Marking 300 years since the British formation of the Grand Lodge......adding 1 through 24 yields 300-yet another way if expressing "666".

There is little spiritual resistance among MEN to all this-
perhaps because they have taken an oath.
The tree is KNOWN by its fruit.....or lack thereof.
Yahshua clearly stated that " when he returns will he find ANY emunah ( faith ) ?? The ovbious answer is clearly no.
Thank you, Henry, for another "hidden" parcel of history....
Psalm 37, Revelation 5:10, and others point to the Kingdom Age....where Yashua will reign-and like Lazarus ...the elect will be raised up for the marriage outlined in John 2 and exemplified in Psalm ( Tehillim ) 45.

I'm amazed that you would publish such a hideous distortion of history. To me this sounds like a shameless and blatant perpetuation of the commonly accepted fiction that Hitler was a raving warmonger. In truth, Hitler did everything he could to avoid a war with England. This historical fact is amply documented. The real raving warmongers were Churchill and Franklin Delano Roosevelt. The Germans were fighting Communism. The Germans lost, and the entire world lost. And the entire world will soon pay the consequences for losing. There was no "Russian Revolution" in 1917. It was a Jewish Communist Revolution imposed on the Russian people from the outside and backed by Western bankers. Just as 2017 will witness another Jewish Communist Revolution imposed on the American people.

Wow, another piece of the truth puzzle falls into place. Once again it proves everything, and I mean everything we have been taught or told is a bold faced lie. I have seen mentioning's of the betrayal of Hess on other sights but I never knew it was this bad for him.

Once again the old saying "The truth is the truth even if no one believes it and a lie is a lie even if everyone believes it" rings so very true.

Many of your readers will recognize the name of Dr. Ewen Cameron as that of the psychiatrist head of the Allan Memorial Institute at McGill University whose attempts in the 1950s to wipe all memory from his patients through torturous methods (which he termed "depatterning", by means of "psychic driving") were secretly financed by the CIA. He was at various times president of the Canadian Psychiatric Association, the American Psychiatric Association and the World Psychiatric Association. In his corrupt quest this mad scientist left "patients" unable to recognize their own children, incapable of caring for themselves at even a basic level, incontinent, etc. There is much information about him on the Internet, and in 1998 a 3-hour docudrama called "The Sleep Room" was made about his inhumane experimentation.

Interestingly, McGill University accounts this monster as one of its academic luminaries. The university's archival staff listings recount this among his achievements: "It was at Albany [State Medical School] that Cameron conducted his most important research on sensory deprivation, memory and aging.... Cameron's high reputation in the psychiatric field is attested by his appointment in 1945 to the American panel to examine Rudolf Hess at the Nuremberg trials [emphasis added]. Knowing what we do of Cameron's subsequent activities, one can only say, "Poor Hess!"