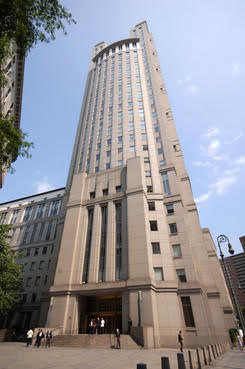 Left, the Southern District of New York federal court at 500 Pearl St.,
is where the federal judges are literally divided into commando units
to advance the corrupt Judeo Masonic agenda.
Insider Frederick Rotir describes how each group operates.
by Frederick Rotir
(henrymakow.com)
The Southern District of New York federal courthouse located in lower Manhattan New York City is literally the "Luciferian Eye" of the "Empire State," i.e. New York State, and is literally the most pre-eminent federal courthouse in the country, and possibly the world, so a great deal of Zionist Cabalist "social engineering legal experimentation" takes place there. 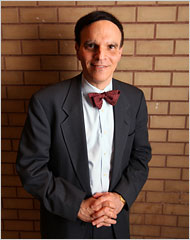 (Left, Chief Justice Robert Katzmann presides over this Jewish Mafia clubhouse. Anyone recognize the hand sign?)
These federal judges like to see "what can they get away with," so as to then impose it on the rest of the United States, who unwittingly must follow their lead in the 2nd Circuit Court of the USA (of which the SDNY is the main courthouse.)
It is light years ahead of the rest of the federal courts in America in terms of money, power, media, racial/cultural diversity.
In addition, this jurisdiction contains the main Federal Reserve Bank with all of the entire world's gold bunkers located a few blocks away at 33 Liberty Street, New York NY, underground about five stories down (the site of another terrorist bombing a few years ago.)
ASSIGNMENT: CORRUPT IN ORDER TO CONTROL
Under the aegis and supervision of Chief Judge Robert Katzmann, and preceded by equally culpable Cabalist Dennis Jacobs, the federal judges of the Southern District are grouped into the following sub-groups, each with the following responsibilities: 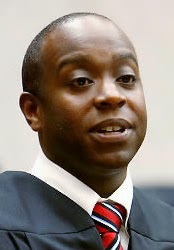 The Black Judge Group - various federal judges such as Gregory Woods, George Daniels, Vernon Broderick, and Andrew Carter, left, were literally selected to thwart, sabotage, and obtain early dismissals for civil rights violations in New York City.
Their other job is to cover up the crimes of terrorist states like Saudi Arabia and Israel, while nailing to the wall otherwise innocent enemies of Israel, such as Iran.
The predominant litigants appearing in their court are racial, religious and ethnic minorities with bona fide grievances against various corrupt governmental members of New York City, such as victims of bad cops, corrupt government officials and lower court judges, out of control child protective services workers, unscrupulous bureaucrats, and others sucking the tit of the New York City taxpayer to earn their living.
The cases and controversies brought before the Southern District invariably get assigned to any one of the above named "black judges," whose job, through various legal and corrupt mechanisms, is to kill and hide these types of civil rights cases. Because who would ever suspect a "black judge" of not giving a damn about civil rights? It's the best cover, ever.
But these black judges have long ago sold their souls for the almighty dollar, career advancement, lust for power and prestige, and loyalty to their Zionist Freemason Luciferian Cabalist masters. With the vast majority of them having been appointed by fellow supreme Uncle Tom and Freemason President Barack Obama, there is no question that their high crimes and misdemeanors, and treason to the taxpayer citizens is protected from up on high by the veritable Prince of Darkness. 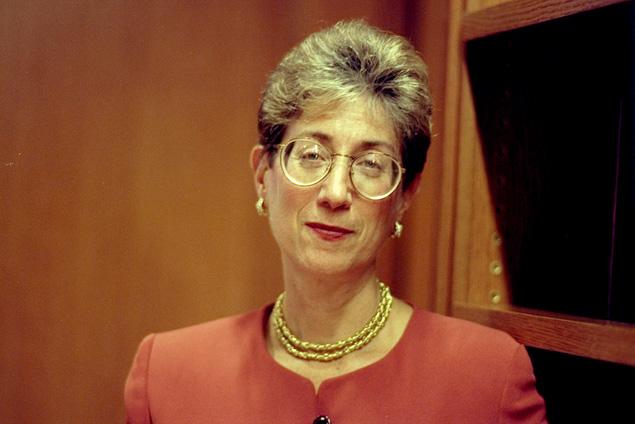 The Feminazi Group - led by arch-Zio-Feminist Judge Shira Scheindlin, left, who recently retired from the bench, was literally appointed by the Luciferian Zionist Deep State as another "protected class" prostitute to torture those before her who are litigating over the Feminazi Mafia police state currently in place and driven by such satanic organizations as organ-stealing Planned Parenthood, the National Organization of Women, and other banker- funded feminist groups whose only role is to neuter the American male, destroy the American family, and force American children into dependence on the State, drug addiction, abuse, child prostitution, trafficking, and pornography. The gaggle of female Zionist witch federal judges led by supreme coven sorceress Shira Scheindlin is absolutely unparalleled in the United States, and their job is to keep the Feminazi Mafia working overtime to destroy the cornerstone of America, the family.
The White Jewish Banker Male Group - led by scumbags of humanity like Judge Alvin Hellerstein (below left), this group is primarily responsible for whitewashing and sanctioning the wholesale robbery and theft of trillions of dollars by corrupted hedge fund managers like Stephen Cohen of SAC Capital, Paul Singer of Elliot Capital, and Larry Silverstein who they allowed to hoodwink his insurance company into paying him $7 billion dollars for TWO "terrorist attacks" of 911 on his precious World Trade Center insurance policy, the building he "purchased" only a few weeks before these "attacks." In the latter case, Judge Alvin Hellerstein was culpable in insurance fraud. 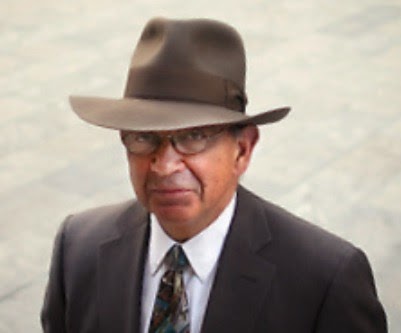 (Left, Judge Alvin Hellerstein, who even looks like Mafia, "handled" all 9-11 litigation)
Under the color of law and authority, this federal judge sub-group has literally given meaning to the phrase, "you can steal more money with a briefcase and a pen, than with a gun."
Most of the white or Jewish male judges in this massive finance whitewashing federal judge group went to white/jewish male privileged prep schools and the Ivy League schools. On graduation, they were grandfathered into the most exclusive and prestigious "white shoe law firms," wherein their clients were the big banks, big corporations, military industrial complex, and other pivotal and central components of the proverbial deep state Zionist Cabalistic Freemasonic elite.
They completely understand their role in furthering and continuing the massive financial crimes originating within the great big international monetary playground of New York City. These judges are there to help other Freemasonic Zionist Luciferians steal other people's money, in a BIG WAY.
-----
Related --Kevin Barrett- Will Larry Silverstein Ever be Brought to Justice for Insurance Fraud?
----------- Philip Giraldi - Justice is Blind, and also Deaf Dumb & Stupid in Southern District of NY

In my opinion, all federal courts, state courts, and even traffic courts are as corrupted as the two-bit whores with HIV positive. These are maggot-ridden cesspools whose only purpose is to screw the public and extort money from them.

The Southern District of New York federal court is not a government court in the classic understanding, but rather, it is listed as a private corporation. All of the courts and government agencies operate as private companies and they have no authority for anything. Of course, they do have violence and they use it via the United States Marshals (Brown Shirt)Service. The court is the screwer and anyone trying to use it is the screwee. Do not look for any justice in these courts.

I speak from experience. The judges will hide exculpatory evidence from the jury to ensure convictions. Going to these courts is like going to a bad religious proceeding.
All of their proceedings are Satanic to the core and no one should expose themselves to such idiocy.

In these courts, it is a massa-nigger relationship with the general public being the nigger. (The word nigger isn't limited to just black people.) The word nigger is proper because it reflects the truth. If I use the word slave it won't have the same effect.

It is the Talmudic Jew that thinks that the goyim are just animals or niggers and it can be seen hidden in the United States codes. The "government" is nothing more than a slave-trading organization with no authority other than the monopoly of violence they hold over the people. If you think the Consitution and the Bill of Rights are helpful, just try and use these rights in the courtroom and you'll see that the whole system is a fraud and a farce.

The Southern District of New York federal courthouse may be the " heart " , but the " brain " is the Royal Courts of "Justice" in London City/Temple Bar.