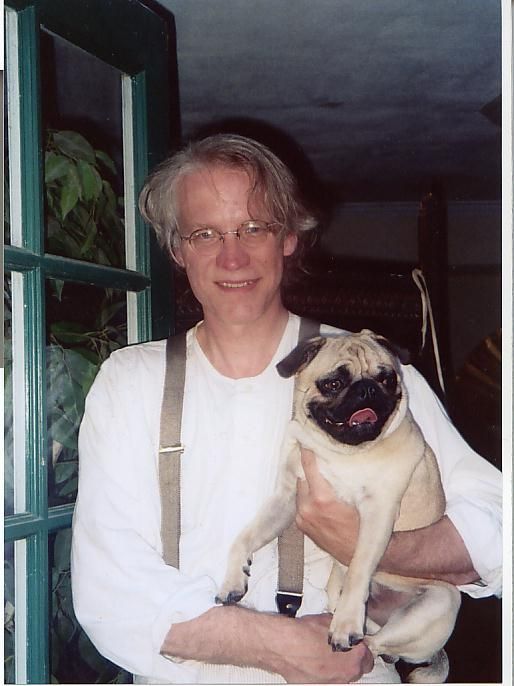 When Julian Lee moved to Portland in 2009, he thought he

had found one of the few remaining white cities in America.

However his idyll was spoiled when Jewish subversives

posted stickers in his neighbourhood demanding that "racist

On walks with his dog, "Moby", Lee found himself

altering these missives to provide a message more to his liking.

They responded by posting his picture and calling him a Nazi.

Whites are learning too late that their governments have been

subverted and their "leaders" are using migration to

I had been told that Portland was one of only two remaining majority-White metropolises. That is not why I had come here -- I had come simply to be closer to one of my children -- but I had heard that. Still, I can't tell you what epiphany and delight it was to arrive here after years in California and be, once more, among "my own people" -- like white girls behind the counter who smiled at you and you could make small talk with instead of surly foreigners as is almost universal in California.

Or teams of white men working in the streets, likely with families back home, working like a well-acquainted and comfortable team and "getting things done." Or an amazing flashback: An older white man in the electronics section of a grocery store who wore a white shirt and tie and knew all about the gear. I realized I never saw that in California. California was being ethnically cleansed.

Yet already there were signs that certain people in the city thought that the majority white state of Portland, which had long obviously been attracting people to the city, was some kind of "bad" thing.

Unbenownst to me they had even passed an unfair "Affirmative Action" law giving first place in hiring to non-whites. I often wondered: "Can't the world be diverse enough to contain one or two majority white towns? Especially in America?" The ethnic cleansing of Portland had begun.

Already the character of the town was changing to become more like California. This was all sad to me. And now [I found] these stickers, as if somebody wanted to stamp out the last vestiges of resistance -- a few young men in motley crews with some bit of racial identity still kicking. 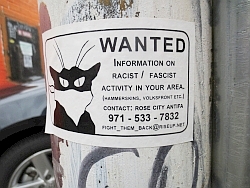 The Jewish team (for the fact is, this group was founded by a Los Angeles Jew and these make up the bulk of these teams) -- was asking the citizens to "report racist activity." What sort of activity would that be? Some young white guys hanging around together and having a beer and feeling a bit of brotherly solidarity? Report that? Or perhaps if those boys put up a pro-White sticker, that would be a reportable "offence"? Certainly these minor things were all to be demonize.

The very word "racist" is a slur devised to cow Whites into racial annihilation. Only Whites are asked to open their borders to the random 7 billion and give up their unique racial bastions "or else they are haters and racist."

The Japanese are not called "racist" because they want to preserve Japan as a place for the Japanese. Only Whites are bludgeoned by this ham-handed Communist word and culturally pressured to accept so-called "multi-culturalism" which really means no-culturalism and the end of White cultures. What word do we have, after all, for somebody who has special love and identification with his people? He's just a "racist" if he's white. 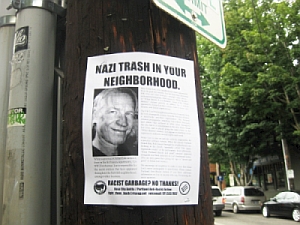 But we praise this in Blacks, Asians, or other groups. Or somebody who appreciates the different types of people, like somebody loves the varied types of dogs? He's just a racist.

Or somebody who wants to preserve not only his own ethnic group -- but see all the unique peoples preserved?

Again, the slur "racist" is equally applied to all these natural, human, and positive values. The word is an invalid word and used in an invalid way, and today it's used only to intimidate Whites into accepting untrammelled immigration invasion, "white guilt," and stampeding them into racial mixing (and genetic destruction) in order to "be good."

So to me the word "racist" -- the one on the stickers -- is a deceitful and even evil word. The Bhagavad-Gita and Hinduism, which is my favorite study and really my religion, placed a high value on the protection of the distinct races and types. In reality, only so-called "racists" respect the diversity and are the preservers of it. Thus the stickers annoyed. 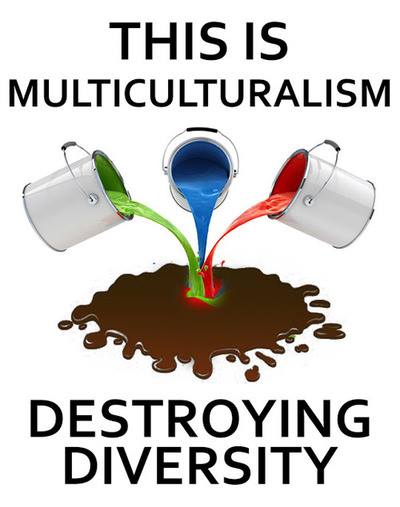 Nowadays Whites everywhere are waking up, and the meme "Anti-Racism is a code word for anti-White" resounds across the internet, along with the more direct phrase: "Diversity is a code word for White genocide." I saw these stickers as reinforcing that meme and that trance among Whites: "We must accept all peoples among us or we are haters."

It's comparable to demanding that a family celebrate it's Christmas by opening the doors to the twenty thousand in their town rather than having a special time for distinct intimates. Only Whites are being asked to give up their countries, their gains and accomplishments, and even their eons-wrought genotypes using this word invented by a genocidal Communist, Leon Trotsky. Indeed, some believe Trotsky coined the word explicitly as a weapon for the genociding of White nations.

Different races belong to the family of man. They all have strengths and weaknesses. "Racism" refers to the ideology that all members of one race are inherently superior or inferior. But Jewish subversives misuse the term to stigmatize any and all racial distinctions. (Similarly, "sexist" denies any differences between men and women.)  These Jewish subversives in fact are true racists because they believe Jews are god-like while the goyim are cattle. This is the racist ideology behind the NWO. In Israel, a Jew can be jailed for two years if he marries a non-Jew. "We will destroy every collective force but our own." Protocols of Zion, 16-4. Collective force = Race, religion (god), nation and family (gender.)

Julian Lee's article is making me wonder if repression of free speech in the US has reached the same levels as in the State of Israel wherein one can be arrested for simply posting their anti Zionist political views particularly as it relates to the way it treats the Palestinians and anyone who tries to help them,e.g. people like Rachel Corrie whom they ran over with a bulldozer in daylight and in plain sight.

In this particular instance, I would surmise that Julian has grounds to file a lawsuit for Defamation (unless in small print on the poster describing him as a "Nazi" it also says "in my opinion").

Those people in his town should act immediately and fight back against that cancer that is trying to disease their community. I know I would ...in my opinion!

I've made a playlist for these videos that show Jewish Hatred toward Whites here: https://www.youtube.com/watch?v=t5qejJS_mk8&list=PLG8lPvm-TWKFbVojQ2s4Of22H8kI5Wxvb

Judaism seems like a religion of hypocrisy. I've lost a friend over this who was posting anti white and anti racist stuff on facebook. She was also posting Jewish Supremacy stuff, pointing out the the Talmud says God took the day off on Sunday and left Jews to finish the job. I pointed out the hypocrisy and she unfriended me. We were friends in real life.

No greater racists than those who are forever yammering about race.

Race should be near the bottom of one's list of priorities simply because it is the rare oddball who does not prefer his/her own race. If someone does not like something about a race other than his own, so what? Since when does one's opinion about race become a crime?

Why does anyone even care about being accused of being "racist"? The proper answer to that is always, "So what? My business is my business, you mind your own business."

I just looked at some of Julian's old YouTube videos. All I got to say is, wow - just wow. This man is a piece of gold, and I am not being sarcastic - a real beautiful soul. I remember reading a quote by Jack Kerouac years ago, and I always think of it when my mind dwells on North American society. He wrote, "All of our best men are laughed at in this nightmare land."

Couldn't say it any better.

I'm a native Portlander, expatriate. It may be "white" in terms of ethnic makeup, but it more than compensates culturally with its over the top liberalism and social justice warrior disease. There was even a TV show made about it, and it's pretty much on target, though not very funny in my opinion.

I disagree with Mr. Lee when it comes to his embracing of eastern mysticism; it doesn't "coexist" with God's word and one cannot serve two masters, but I admire his righteous fight against some common enemies.

I liked this article but maybe change the title to White is the New Nigger. This racist nonsense against whites has been around for awhile and the people who do it are extremely immature. They are of the communist-libtard variety and they don't listen to intelligence and reason.

People should be able to associate with whomever without having to get involved in the puerile discourse of race baiting.

Communist Jews love to do this and if you call them out on it, they'll call you a racist.

I noticed on the sign that they say to be aware of fascists. Well, fascists are actually a part of the communist-socialist ilk. The Jews can be just as "fascists" as anyone else. Getting called a racist doesn't work anymore because most people are aware of the scam. I would tell them to stick it where the monkey puts his finger.
http://verydumbgovernment.blogspot.com/2013/07/lessons-on-racism.html

Excellent analysis - would clarify one point, however. It is the White Christian who is under assault. I used to make the error of lumping us in together with the White Jews and Catholics, but we are not welcome in those groups either. The Atheist Socialist Jews, the communist Black Power crowd, totalitarian Muslims are the tools for cleansing the Western Christian countries - all of this has been led by the sociopath Oligarchs who only believe in $$$$$$$$$$$$$ and power... not necessarily in that order...for a very long time. This really is a war against Satan who will not rest until he has everyone under his control. Henry has written many pieces that document how that is done. RESIST! DO NOT COMPLY!