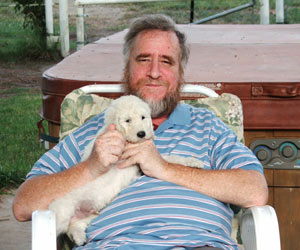 "Barry Chamish didn't go looking
for dirty secrets;
they found him."
Barry popularized Rabbi Marvin Antleman's revelations about
the Sabbatean Jews who formed the Illuminati and took over the world.
He went on to expose Israel's use of Yemeni Jewish children as
radiation guinea pigs and the murder of Yitzak Rabbi by the Israeli
Shin Bet. Barry alienated many (including myself) by his lack of
sympathy for Palestinians, but his contribution to truth cannot
be denied.
In Memoriam - Barry Chamish
by Debra Caruthers
There are not many people who have the courage to take on the Israeli Deep State. Barry Chamish certainly did not expect that his own path would take that direction. Far from it, Chamish's early reporting career began as a journalist for some movie and music trade rags. By his own words, he didn't go looking for dirty secrets; they found him. 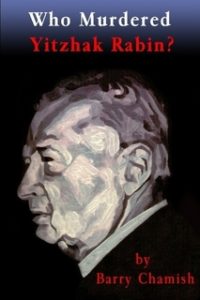 One final note about Mr. Chamish. He was always very careful to use the phrase "Labor Zionist" rather than just "Zionist." He wanted to make it perfectly clear that Labor Zionism was a political party that Hitler allowed to exist in Germany so that he had an agency of Sabbateans through whom to drive a chosen few to what would soon become the political state of Israel. I have always been careful to avoid the overworked and often misused label of "Zionist." If we really want to educate people, we should instead be using the phrase "Labor Zionist," with all its historical links to its alliance with the Nazi Party.

If you care to do further research of Barry Chamish's topics of interest, I keep this playlist at Youtube. Some videos include his lectures or radio shows; some touch on subjects that he would write about. Keep an ear out for the numerous shows he did with Eric Jon Phelps about how Shimon Peres, who had been educated at a Jesuit school, was working to help insert the Vatican back into the Holy Land. Do feel free to leave a comment below if you find other Youtube videos that I should add to my Barry Chamish Playlist.

---
Related
Chamish on Netanyahu
Barry's web site
Deborah's web site
Chamish archive
Barry's Last Show
First Comment by AW
Barry Chamish did not just lack sympathy for the Palestinians. He was a fraud who perpetuated the Zionist lie that there was no such thing as a Palestinian and that the native Arabs in Palestine/Israel today were brought in from surrounding Arab countries in order to prevent the creation of Israel in 1948.
This paragon of "truth seekers" continued to believe and propagate this Zionist LIE even in the face of irrefutable evidence (some of it gathered by his fellow Jews like Finkelstein etc.) that Palestine had for centuries been populated by a majority Arab population and Jews were always nothing more than a very tiny minority.
I am concerned when sincere truth seekers trust Chamish's version of events about anything when he clearly approached his research subject with a clear bias and his main concern was always "his people" which he believed are God's chosen (special) people.
Remember that Chamish always referred to Palestine as Judea and Sumeria and believed that the settlers were unjustly maligned by the media.
Henry, I have visited Palestine and have witnessed firsthand the cruelty and barbaric nature of these "settlers" who are given free reign to terrorize their Arab neighbors without fear of ANY legal consequences.
I don't doubt that Chamish's research expanded our knowledge of some facets of the globalists' agenda; but, in light of what I mentioned above, I struggle to see how many genuine truth seekers (like yourself Henry) consider his work (or even his character) so highly.

I got excited learning Zevi's Crypto magic and how this manifests on the LDS church. Baphomet immediately came to mind, then Luciferianism and subsequently LDS elite. This works.

We have a solid timeline on the creation of the LDS standard works commencing with Zevi, brought to fruition via William Wickham, produced by team Cloots and presented on the US public via a yet unknown transitional carrier and handed off to Brigham Young before it reached Joseph Smith, if there even was such a person.

The worst is yet to come locally as the sheriff's department here appears to be a service asset for Shin Bet. More on that later.

The language in this WP is challenging but directed at the problem, so please do not take offense.

The Ideological Tap Root of the Mormon Church is Sabbatai Zevi

Excellent information. Although not discussed in this missive, Sabbatai Zevi's Crypto explains the LDS church perfectly. This would gave to have been William Wickham's inspiration for his work with FR subversives who were resourced to write and publish the LDS standard works well before making an appearance in the US some 50 years after fact. I don't claim to be an info source about this issue, but I did write a brief - albeit unprofessionally worded - Word Press narrative on this issue a few weeks ago. I'll send it from my laptop shortly.

What the LDS application accomplished that the Baptist church could not was penetration on mainstream US Protestantism via sex. Eventually frame bridged to food and recreation, LDS elite were wired to physical needs and the psychological dynamic of power and visibility thus empowered to end Christianity masquerading same to people who were less inclined to developing character than to aggrandizing their perverse desires the later of which come across vividly in such projects as the Redlands temple and 2013 abduction/slaying of Sylvia Marie Flores.

I have another way of getting at it, but this produces corroborating information linking Sabbatai Zevi to some pretty sick operations via religion.

Henry, I don't think people should attack Barry Chamish just because he was a national religious supporter of settlers. He exposed the truth about the Sabbateans, to a wider Jewish audience. That is valuable. People are not bad just because they live in the West Bank as Jews.

The West Bank is called Judea and Samaria in Hebrew. And it was inhabited by ancient Israelites and we have words for in in Hebrew. I don't support the occupation, but there is no evidence that Barry did anything against Arabs. The settlers truly are over maligned in the media, vague accusations of attacking Arabs can not apply to every single settler. Yes it happens, but we cannot discount what Barry Chamish has to say just because he lived or supports living living in a certain part of Israel (or Palestine, so what?). I don't believe in the occupation but I believe Jews are allowed to live in Judea and Samaria, as equals with Palestinians.

Barry Chamish exposed the Illuminati to his fellow Jews, this is the most important aspect of him. It's hard to expose the ruse of "anti semitism" when some people make it seem real

Thank you for honoring the memory of Barry Chamish. It was through him that I was introduced to Rabbi Marvin Antelman's small but mighty book, "To Eliminate The Opiate." Rabbi Antelman based much of his research into Sabbateanism from the work of Gershom Scholem. Rabbi Antelman learned about Early European Jewish Freemasonry from the amazing research of Prof. Jacob Katz.

Barry Chamish, love him or hate him, pointed to these great Jewish researchers who shined a light into obscure, unexplored historic rabbit holes that kept me busy for many years.

I will always be grateful for having known Barry and I will miss him. I will also miss Barry's good friend and and fellow Canadian, the Israeli investigative journalist, Joel Bainerman, who Barry had introduced me to in the late nineties. Joel and I became close friends. Unfortunately, Joel passed away about two years ago. I had told Barry of his passing. Joel was a great sounding board to me as I plumbed the depths of Sabbateanism and beyond. I am grateful to have known both Barry and Joel.

One thing that Debra did not mention is that Barry believed that the Vatican was planning to internationalize Jerusalem so they could own it. After doing my own research online I realized he was right. However, recent events with the Pope (he seems to be working to establish a world religion from the looks of it) indicate that Chamish and others are might be wrong about the Vatican wanting to own Jerusalem. The international Jerusalem which Barry and others talk about seems to be planned for a new one world religion. The Vatican is just doing the globalist's bidding. Will Francis be the first spiritual leader to head this new entity as Jerry Jenkings and the late Tim LaHaye envisioned?

Some of the reviews bashing Chamish's books on Amazon are a coordinated attack to lower their ratings. If you visit some of his books you will see that the reviews give him 1 star and say the same exact thing on his other books!. One example:
https://www.amazon.com/THE-LAST-DAYS-OF-ISRAEL/product-reviews/1893302164/ref=cm_cr_dp_qt_hist_one?ie=UTF8&filterByStar=one_star&showViewpoints=0
https://www.amazon.com/Murdered-Yitzhak-Rabin-Barry-Chamish/product-reviews/0922915504/ref=cm_cr_dp_qt_hist_one?ie=UTF8&filterByStar=one_star&showViewpoints=0

I was moved to learn Barry Chamish is dead. I stumbled on it somewhere back around my birthday. He always seemed so sad.

Most summers during much of the 60's we'd spend a week on the beach in St. Augustine. Back then we had the whole place to ourselves, because the tourist season was only during the winter. I hope Barry had some enjoyment living there for his final years of his life there.

He accomplished some important work, which I suppose cost him his career a mainstream writer. I've though he was one of the more under-appreciated researchers of the last 10 years.