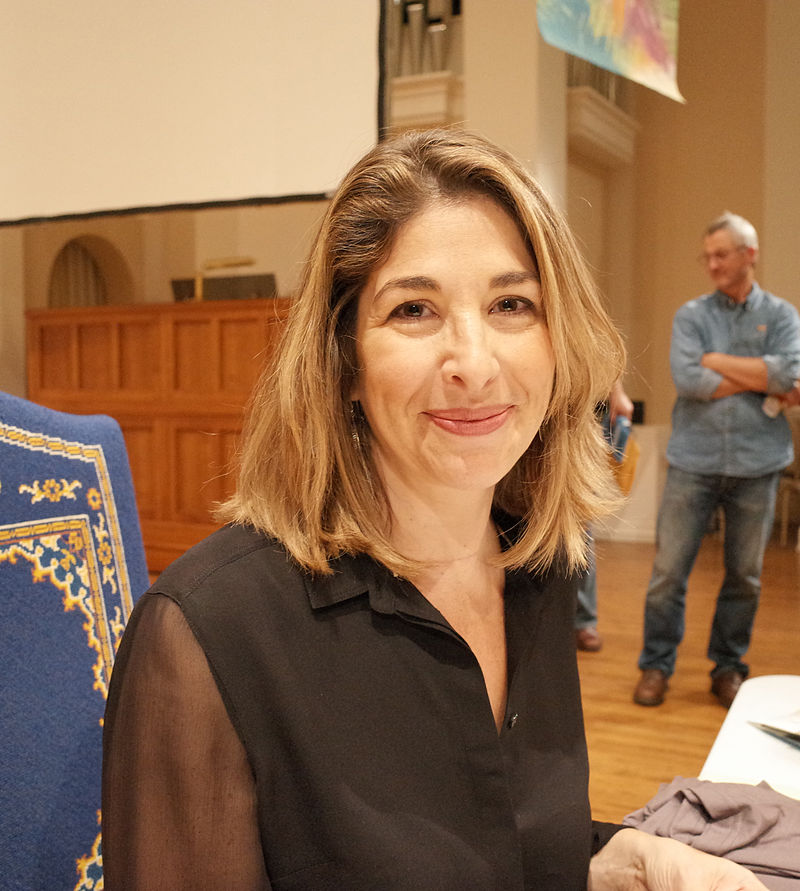 (Left. Naomi Klein. The Schlock Doctrine.)
Jewish central bankers have always used socialism
and communism to usurp the wealth of the goyim under
the pretext of helping the poor.
There has never been shortage of Jewish dupes like anti-capitalist
firebrand, Naomi Klein, willing to help them attack their rivals.
"Hamish" summarizes Miles Mathis' view that Naomi Klein
is hyped by the media because she diverts the energies of
leftist do-gooders.
by Hamish
(henrymakow.com)
Naomi Klein is a mainstream media darling who simultaneously enjoys the adulation of so-called anti-Establishment activists.  Why is she applauded by 'The System' while concurrently exposing it?
In his article What's Wrong with Naomi Klein?, Miles Mathis says Klein's effectiveness as a reality shaper is based on her omitting important facts like 9-11.
Mathis: "Naomi Klein supporters will say something like, 'You agree with her on almost everything. So how can you say she is a mole? Is it because she is Jewish?' No, it isn't because she is Jewish. It is because her articles are published by places like The Nation and Harpers, which are fronts for the faux-left...
Even worse is her position as Miliband Fellow at the London School of Economics. The LSE was founded by Fabians, including George Bernard Shaw, Sidney Webb, and Annie Besant. Remember, Besant led the Theosophy movement at the time, which I have shown was an Intel creation. The newer fake progressives like Klein are following the Chomsky-Zinn playbook of first telling their audience everything they want to hear, and only then diverting them into inaction or useless actions. That is why it doesn't matter that these guys and gals 'agree with me on everything'. I admit that is mostly true.
"When I go down the list of Chomsky or Zinn or Klein, I do indeed agree with almost everything they say, which is why they are so insidious. It is the things they aren't talking about where the disagreements lie, so they don't come up. I learned this first with Chomsky and Zinn, who at first refused to talk about 9/11, but when they did talk about it then it was only to get mad or huffy and dismiss all questions as from a lunatic fringe. It was 9/11 that ripped the masks of Chomsky and Zinn for most people. Before that we were successfully diverted." [Makow- Zinn, who died in 2010, was actually a secret member of the Communist Party.]
Klein's avoidance of 9-11 is all the more remarkable because the false flag demonstrates the thesis of her best selling 2007 book, The Shock Doctrine: That the powers that be take advantage of major disasters, be they economic, political, military or natural, to implement unpopular free market policies and social change.
Mathis: "Klein has continually dodged all questions about 9/11 and other false flags. I don't trust anyone who does that for any reason. Period. She says that she "reports on what she can prove, and she can't prove 9/11, so she is not reporting on it. But she can prove that Bush invaded Iraq base on lies, etc. Hmmm.
"Do you really think there is more evidence Bush lied about weapons of mass destruction in Iraq, or more evidence 9/11 was an inside job? ... She could prove the lies of 9/11 to the same extent she could prove the lies regarding Iraq, so we have caught her misdirecting in awesome fashion."
Naomi's more recent pet project is the tired tale of the bogeyman climate change. Her latest book 'This Changes Everything: Capitalism vs. the Climate' (2014) calls for an end to prosperity by submitting to control measures. In other words, give up your wealth at the altar of Gaia. The book, not surprisingly, garnered the usual Establishment accolades--it debuted on the New York Times bestseller list in 2014. Her husband--Avi Lewis (whose grandfather was an outspoken member of the Jewish Bund)--enlisted a slew of Hollywood stars to concoct a documentary based on her book. A husband & wife agitprop tour-de-force!
What does Klein omit in her opportunistic climate fearmongering? Well, for starters the entire 'climate change' discourse is a ruse--yet she bases her entire book's premise on it being legitimate. Quite the misdirection eh? Did Naomi miss the 2009 Climategate scandal that unveiled the climate change program as the 'worst scientific scandal of our generation?' She also neglects to mention that Environmentalism is an elitist-bred socialist religion. With all these omissions, what relevance could her book possibly have except to serve an agenda?
The success of an omission also partly relies on a sufficient capacity to cover-up whatever is deemed necessary to omit. Cockroaches prefer creeping in the dark--and so the modern day zeitgeist defined by the obliteration of privacy has spooks everywhere nervous.  The recent Wikileaks disclosures of DNC skullduggery evoked no outrage from Naomi. Instead,  Naomi told Glen Greenwald that "there are serious threats to personal privacy and other critical political values posed by hacks of this sort, particularly when accompanied by the indiscriminate publication of someone's personal emails."
The only area where we can give Klein full marks is her uncompromising support for the Israel Boycott and Divestment movement.  However, it would be difficult for someone in her position to "omit" the persecution of the Palestinian people.
CONCLUSION
Mathis is correct in identifying shills like Klein and Chomsky as Establishment lackeys. More precisely, he's doubly correct identifying them as magicians: they deal in misdirection.  Orwell stated that 'omission is the most powerful form of a lie' and so this deceptive technique is the mainstay of media magic.
----
Makow comment- Klein's biggest omissions are her failure to oppose the bogus attacks on Russia, gender and European culture (migrants.)
She has failed to expose the fact that ISIS and terrorism in general are sponsored by the West.

Re the last paragraph of the Naomi Klein piece, I've encountered a lot of articles with an anti-Trump theme in the alternative media lately. In the normal way I'd give them a measure of credence, but lately I've begun to see them as, at best, a reckless form of self-indulgence. Sadly we're no longer in the abstract realm of guessing games about which politician is or isn't "controlled opposition". We don't have that luxury, because we're looking down the barrel of a huge Zio-gun. We simply have to make immediate choices based on what politicians say they will do. On that basis we know what Hillary will do - she'll ethnically cleanse Syria, Iraq and Libya and send the populations to Europe and other western countries, in order to make room for a greater Israel. And she'll crush Christianity at home. Maybe Trump will do the same, but for any sane person the choice between someone who openly admits she'll destroy your country, your race and your religion, and someone who says he will do none of these things is a no-brainer.

Thanks for posting this one, this is still a Blind Spot for many people, good work for busting her on her Major OMISSIONS.

Itâ€™s what happens when people think with their emotions, and leave their mind completely out of it..

Also her popularity makes her highly suspect, maybe we should call her the Queen of Omission/or maybe just the princess; ) : )

Climate Change has occurred for Billions of years(God's fault, not mine). Please would you enlighten your readers to the fact that Anthropogenic Climate Change is just a means whereby the rich Tax the hell out of us ALL for all the dirty/toxic/oil creations 'they' ENFORCE us to use(which 'they' claim is ruining the Climate).

I am thinking BIG time here of Stanley Meyer and his Water Powered Car. Even IF this is a myth, why aren't all the 'scientists' putting their heads together to MAYBE make this true/work, instead of spending their time/energy creating more machinery/devices/bombs to KILL people.

Wow. We sure are a Bent species, no? But, WOW, it's great to be alive in these changing times(oh oh! I shouldn't say that, we may just get Taxed on that change too)

You have nicely busted this woman's thin veneer of credibility

You have grabbed her integrity by the pussy

I agree that climate change I is real. It is spring in South Africa, and it is suppose to be hot. We just had winter, but it is still very cold and raining. Makes a lot of sense. I'd swear this happening because the earth is trying to cool itself down.

9/11 was an inside job for sure... Climate change matters to the elite. They want to ensure their survival, not because they care about the masses.

Iâ€™ve researched the science of man-made global warming for many years â€¦ it is very real, not a plot â€¦ Naomi is right on this point.

I agree her stance on 911 is disheartening â€¦.

The co-founder of Greenpeace disagrees with your conclusion that anthropogenic climate change is realâ€”he testified to the US Senate stating: "There is no scientific evidence of man-made global warming. No actual proof, as it is understood in science, exists."

The global warming models have been consistently falsifiedâ€”so, I recommend you expand your research, starting with the film: Climate Hustleâ€”that shows that politicized climate change is an "environmental con job being used to push for increased government regulations and a new 'Green' energy agenda".