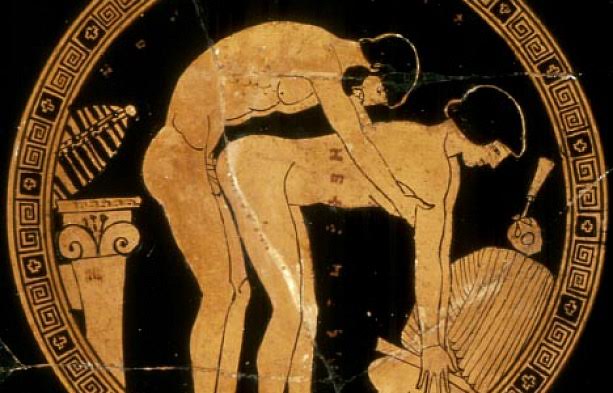 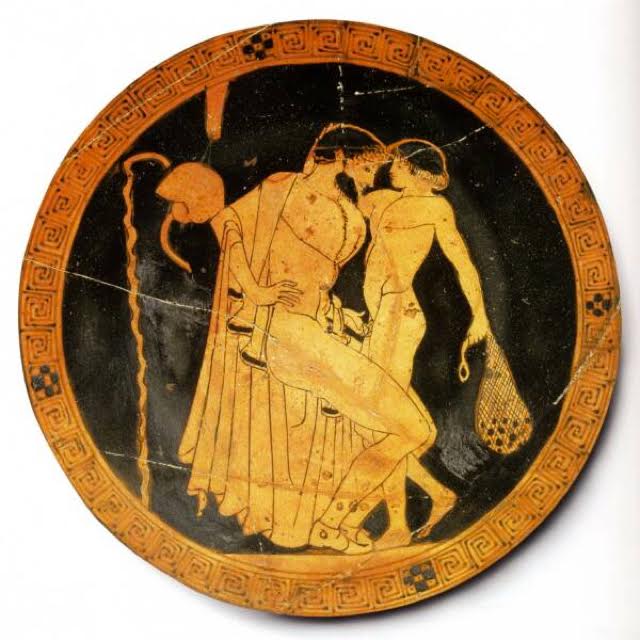 Make no mistake about it : MOST Athenian Greek pictures you can see in world-class museums if you care to ask to view their complete collections (as many pedophiles do and are shown on request if they do it with discretion) of vase paintings and frescoes about education or pedagogy are about pederasty, as MOST classical texts about Athenian or Athenian-style education were about boy love relationships first and foremost.  In that way they managed to have a whole elite class think according to the same format.  It worked so well it endured through the whole of Roman Empire for the richest Roman elite to have their sons educated in that way only.
Ancient Athens was not a city of art and culture, it was a city of banking, piracy, espionage and mind-control.
Athena, the city's patron Goddess, was not synonymous with wisdom and arts, that is a very bowdlerized translation, in greater part influenced by the new meaning the Greeks words were to take in Roman mouths (a more sentimental people) and even more so when Christianity was to give the language a very brilliant second debut from the first century CE onwards : in 5th century Greek though, me:tis sophia did not mean wisdom, it meant cunning, the art of seeing without being seen, and of hiding and counterfeiting one's emotions.
In the same way technai did not mean arts nor techniques nor technology, it meant dirty tricks as used primarily in war, in sea battles especially, and also in financial speculations.  The owl as an emblem both for the city and for the deity was as the night bird par excellence the symbol of espionage deciding about the city's fortunes, of wars that were to be waged by deception first and foremost.
The Parthenon was first and foremost a bank, a treasury.  You deposited there your savings (very often booty from piracy) and were granted pensions from the state in return : since paper currency and paper cheques were not yet invented, since there was no common monetary system to the various Greek Cities, inter-city interest rates could not be charged, therefore offering life-long pensions for your offerings and deposits were the way interests would be paid to clients.
The only kind of usury that Solon managed to prohibit was inter-individual loans between Athenian citizens, so as to make usury a private state bank monopoly, not to do away with the love of interest charging as is commonly taught to college goers.  He did not put an end to interest charging : for instance, private citizens were still encouraged to lend to strangers, in the same ways Jews are prohibited to charge interest rates from one another but encouraged to lend to non-Jews and ideally through the agency of one common big bank lending to other states, as the Parthenon did.
One modern figure that managed to incarnate ancient Goddess Athena best through very specific neo-pagan rituals was none other than Margaret Thatcher, who managed to resemble physically to the sculptural ideal.  Athena as a virgin Goddess was the archetype of the woman who rather than marrying a man marries a wallet and refuse to her man all pleasures in bed (but gives her all the talent and luck he needs to be a better crook) and rather encourages him to go after boys to satisfy his urges.
As England under Margaret Thatcher, Athens under Solon grew into the city most callous to the everyday needs of common people, it is one of the ancient cities most devoid of collective equipment such as baths, aqueducts, sewers (the one you can see today were built quite later by Romans as they had turned their city into their own child sexual tourists' resort).  All big cities of antiquity had a minimal form of welfare for at least part of their not so well to do, in the form of food quite often.  Not Athens : if you were poor and were to die out of scarcity, that was divine judgement (ananke:).
--in response to my questions
Whether there is a link between ancient Athens and Illuminati practices of today?  Calling it a link is just ridiculous : the Illuminati were then called the Order of Eleusis, and it exerted total control over every tiny thing on the Athenian territory.  Contemporary mind-control methods as are used by the CIA are but modern adaptations of timeless tricks as used to be used then.  Graduating into the Athenian de:mos was but the first degree of initiation, which was of pedophiliac nature : there were many other ones up to the top.

Athens was promoted to the status of cultural capital of the whole Hellenic world by Jewish initiative alone, through the agency of the society of Eleusis that acted both as a kind of CIA and Masonic Order. These people from without were not then called Jews because the very name of Jews was not yet introduced even in Hebrew proper to denote whom we nowadays call such, but they were already there.

Plato called them the Phoenicians, but these were very peculiar Phoenicians interested in the magical manipulation of all other peoples, not the mere merchants of Tyre, Sidon and Carthage.
Being a mentor, a paideraste:s entailed obedience to a somewhat higher degree where child sacrifice (Â«paidothusisÂ») was practiced in order to sort out the candidates capable of remaining stoical, and only those had the mandate and ability to impart their Â«gnosisÂ» (improperly translated as knowledge, but rather meaning direct occult contact) by anal transmission (mere oral transmission of knowledge was mocked off as incomplete and giving right to no power).
It must be noted that the Athenian Â«paidosÂ» (youngster) was barred from any other sexual contact before his initiation was complete, if meanwhile he slept with one woman one single night, he was barred from all hope of becoming a citizen entitled to vote.  This is very important to mention because the future form of Â« democracy Â» The New World Order scheme intends to apply to all humanity, if they are to succeed, is that one : you are granted full citizen's right only in as much you have surrendered the whole of your body and soul sexually, only if the whole of your subconscious is preprogrammed.
--
Related - Kay Griggs on Homosexual Initiation in US Military
-----------  Recently by Francis - Voodoo Adept sees Civil War

Comments for "Athens: Cradle of Pedophilia and Mind Control"

Thanks very informative - pieces together a lot. History has been rewritten to honor tyrants who have beeb rewritten as heroes (Churchill, Roosevelt, etc) and going back to antiquity. When I awoke the 2 things I realized were wrong with the world were (1) war and (2) child abuse/pedophilia and that has remained constant. But this helps article also helps reconcile the Bible in such passages (KJV):

Exodus 20:5 Thou shalt not bow down thyself to them, nor serve them: for I the LORD thy God am a jealous God, visiting the iniquity of the fathers upon the children unto the third and fourth generation of them that hate me; (note the NIV and other translations distort this verse).
1 Samuel 15:9 But Saul and the people spared Agag, and the best of the sheep, and of the oxen, and of the fatlings, and the lambs, and all that was good, and would not utterly destroy them: but every thing that was vile and refuse, that they destroyed utterly.
1 Samuel 15:22-23 And Samuel said, Hath the Lord as great delight in burnt offerings and sacrifices, as in obeying the voice of the Lord? Behold, to obey is better than sacrifice, and to hearken than the fat of rams. For rebellion is as the sin of witchcraft, and stubbornness is as iniquity and idolatry. Because thou hast rejected the word of the Lord, he hath also rejected thee from being king.

So God wants love and devotion more than sacrifice and He ultimately prepared the only true sacrifice. In 1 Samuel and in other places (Noah and the flood) the perversion so rampant -- whole groups became corrupt - and also the animals - they were probably sodomized as well and corrupt. This is happening today ...

Anytime you have the occult and communism in any government, that government is not fit to exist. With all of the information that has been disclosed with Pizzagate, I would think that there would be some form of investigation. But the pedophiles aren't going to investigate the pedophiles. To be a government official, one must be a Satanist. Satanism, in turn, manifests itself in communism. Communism and socialism operate completely outside of the natural law. Of course, once one has gone to the Satanic dark side, then the evil of pedophilia becomes part of the mix.

Pedophiles are the ultimate in evil and they need to be thrown out of society along with all Satanists. There is no way to assimilate people like this into any peaceful society.

Sexual abuse is the ultimate in physical and mental persecution. Many of the people who do it are either in the government or they know about the abuse but turn the other way.

Democracy is just another way of playing the voter for a sucker. The illusion of free choice is just that an illusion; a big fat lie. To have no government would be better.
With no government, the pedophiles would lose most of their protections.

This is why people should keep their children out of school. A liberal communist pedophile has nothing to teach anyone. It is best to keep yourself and your children away from these mindless pigs.
http://verydumbgovernment.blogspot.com/2016/11/why-liberals-are-such-idiots.html

This is a staggering article, almost too much to take in all at once, because it explains the true meaning of the Greek concepts of democracy, and the real NWO plan: to make submission to sodomy a condition of citizenship and voting rights. It also explains the recent exposure of widespread sexual abuse of athletes by coaches worldwide. Humanity owes a debt of gratitude to Francis for writing this, and to Henry for publishing it. I am still in a state of shock.

Your article on Athens, brings to mind the judicial murder of Socrates.

Sentenced for corrupting the youth, right!? He probably spoke out against it.

Socrates a stonemason, & a tradesman was hardly in the upper echelons of society.

& definitely not the start of Freemasonry.