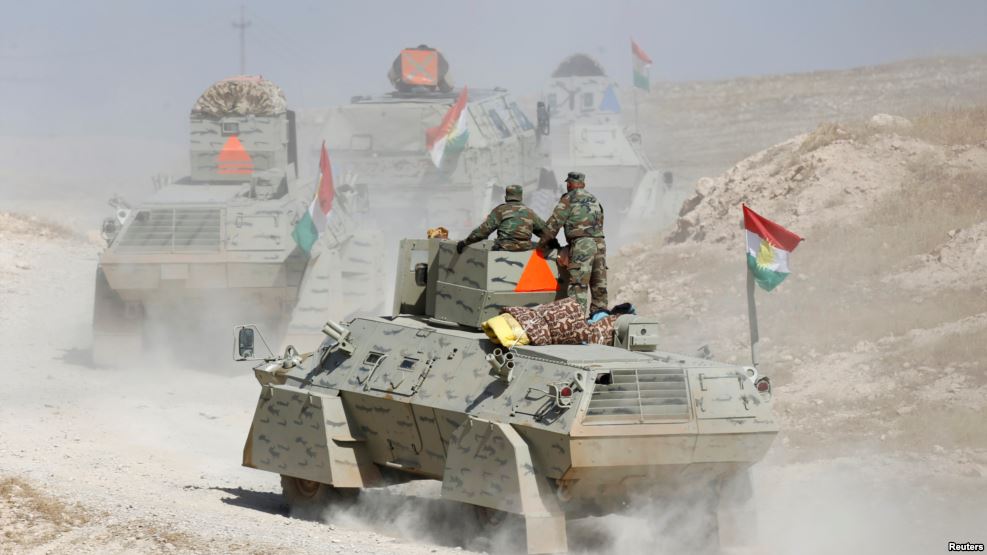 After early advances, the effort to

retake Mosul has bogged down. The

battle symbolizes widespread disenchantment among many Iraqis with their dysfunctional and impotent government, and nostalgia for Saddam Hussein.

by RA in Basra

Two months later and despite early achievements by Iraqi forces, the gruelling battle is far from over. Although assisted by US-led coalition warplanes and military advisers (and a very limited Turkish involvement), Iraqi troops are currently embroiled in a complicated urban fight with ISIS militants.

Mosul is Iraq's second biggest city with a diverse population of 1.5 million citizens. As an industrial hub rich with oil fields, it is home to a motley collection of ethnicities and sects, chief among them: Arab Sunnis, Assyrian Christians, Kurds, Yazidis and Turkmen.

Government forces and their allies are confronting a resilient contingent of 6000-8000 ISIS fighters, as well as an intricate network of explosive devices, landmines and underground tunnels. Severe winter conditions, not unusual during this time of the year in northern Iraq, are not helping.

The battle has already taken a huge toll on armed forces and civilians alike. According to recent UN reports, nearly 2,000 Iraqi security forces were killed in November, most of them in Mosul. That comes on top of no less than 2,000 civilian injuries and casualties during the same period.

Additionally, more than 100,000 civilians have already fled their homes; up to one million people are at risk of being displaced. Residents are now either living without regular access to food, water and medical supplies or running the risk of being caught in the deadly crossfire.

For ISIS, Mosul represents their very last stronghold in Iraq, close to Syria - where the group is entangled in another fierce war with the regime of Bashar al-Assad - and to supply routes through neighboring Turkey. Having served as a recruitment base and source of income from oil and tax revenues, the loss of Mosul would deal a huge blow for ISIS.

For Iraq, this battle is a litmus test for Iraqi factions in their all-too-elusive pursuit of a sustainable governance formula. Reaching and maintaining a post-ISIS power-sharing agreement between the different forces will go a long way towards determining the future of Iraq. However, this goal may prove difficult to attain.

The Kurds and Baghdad signed a deal last summer to share oil revenues from the Kirkuk oil fields. But the Kurds long for a Greater Kurdistan that would unite ethnic Kurds in adjacent regions of Iraq, Iran, Syria and Turkey.

Mosul's local Sunnis are expected to push for some sort of autonomy. The city is home to many former Baathists and staunch supporters of the old regime. They seek a revival of past Sunni dominance over Iraqi political life, which mainly explains their recent cooperation with ISIS.

Then there are the all-too-influential Shia militias (known as Hashd Shaabi or Popular Mobilization Forces). These already-powerful forces derive tremendous support from Iran and are by all accounts shooting for a prominent political and military role in post-ISIS Iraq.

Reports suggest that Iran has already dispatched 1,000 military advisers to Iraq and spent more than USD 1 billion on military aid. Iranians wish to exert further control over Shia-majority areas surrounding Mosul.  They seek to maintain a corridor into the other battleground field in Syria. Iran's wider objectives, to include the realization of the Shia Crescent, are facilitated by a group of cronies in Baghdad led by former and incumbent politicians.

Turkey hardly desires an outcome that would give the Kurds the upper hand along its southern border for ethnic, geopolitical and economic reasons. This rings especially true given that the Turks are mired by an ongoing internal Kurdish-led insurgence at home.

Saudi Arabia aggressively supported the meteoric surge of ISIS early on along with other Gulf monarchies to counterbalance Iran's clout in the region. Being currently mired in the Yemen war and grappling with low oil prices, Saudis have grudgingly taken the back seat in the battle for Mosul.

Further afield, there is Israel. A mosaic of weak and conflicting ethnic, sectarian and religious entities in the Middle East remains at the core of the long-term Israeli agenda.

As for the US, a resounding ISIS defeat in Mosul will serve, on the face of it, Obama's last gasp attempt at salvaging his teetering legacy in Iraq. This does not negate the many reports that attribute the rise of ISIS in Iraq (and Syria) to covert CIA (and MI6) funding and support. However as long as an ISIS-drubbing translates into further disintegration and divisions that ultimately play into Israel's hands, that is mission accomplished.

Mosul will eventually be recaptured by the Iraqi government. However, the botched efforts to  fill the post-ISIS vacuum threaten to plunge the country into further chaos - and increase the likelihood of irrevocable partition.

Makow comment- The difference between Aleppo and Mosul is the Russians.

This article is one more proof that the "west," especially the U.S. and Britain, both together of which are the major cause of all the Mideast unrest for the sake of Israel's desire for their "greater Israel," needs to remove itself from nations which are none of its concern.

Moreover, "aid" to Israel must stop as it only perpetrates the unwarranted continuance of a failed, belligerently criminal state which has no collective will to survive on its own hard work but wishes to expand and profit on the manipulated sacrifices of anyone else.

Since Aleppo fell to the government, the floodgates of the mainstream media have been opened and all they talk is the supposed atrocities of Assad. I mean, years and years of war and no indignation until today?
What do they want? To deliver the city back to Isis?

The answer is YES and Damascus too.