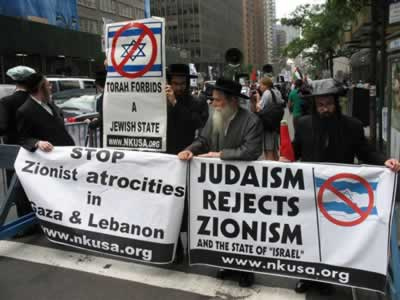 "Let no one be fooled. The State of Israel has nothing to do with Judaism, and on the contrary, it has consistently tried to extinguish Torah observance and values."
It's important to remember that not all Jews are Cabalists (Satanists.)
While Zionists pretend to represent all Jews, they only represent a minority
of American Jews.

Statement by Neturei Karta International . U.N Security Council resolution 2334
On behalf of anti-Zionist Jews worldwide, we of Neturei Karta International, Jews United Against Zionism, greet with enthusiasm the recent United Nations Security Council resolution 2334 condemning Israeli settlements as illegal.
For decades, the settlements have been a major cause for bloodshed and unrest in the Holy Land. Hundreds of innocent lives have been sacrificed on the altar of nationalism and lust for land. We congratulate the countries in the Security Council for taking this long-overdue step toward justice and peace. And in particular, we congratulate the President of the State of Palestine, His Excellency Mahmoud Abbas, on his success in achieving the passage of this resolution.
At the same time, we wish to reiterate the Torah position that it is not just the West Bank that is illegally occupied. Jews have been sent into exile by the Almighty, and any kind of Jewish sovereignty over any territory is a violation of that decree. Therefore the concept of the State of Israel is entirely illegitimate and forbidden. The crime is compounded when the creation of this homeland entails the occupation, oppression, subjugation and expulsion of another people.
Before the era of Zionism, Jews lived in Palestine in peace and security, side by side with the Palestinian Arab population. We fervently hope for the day when Jews return to abiding by the laws of the Torah and living in peace with all peoples.
As Jews, we have always been especially pained by the actions of the State of Israel in general, and the radical settlers in particular, since they claim to be acting in our name. Predictably, Israeli Prime Minister Netanyahu has reacted with anger to this clear demonstration of unanimous world opinion against his state's crimes. Drawing on Jewish themes, he has cast himself in the role of the Maccabee fighters whose victories we celebrate on Chanukah, and the Security Council nations as their enemies.
Let no one be fooled. The State of Israel has nothing to do with Judaism, and on the contrary, it has consistently tried to extinguish Torah observance and values. The Torah values life and service of the Almighty, while Zionism values land conquest and secular culture. The Maccabees did not go to battle for freedom or independence; they wanted only the right to continue to practice Judaism. If any comparison is to be made to the Chanukah story, it is of Netanyahu and his fellow Zionists to the enemies of the Jewish people in the time of the Maccabees.
Netanyahu has vowed to continue building settlements, but we appeal to the world to realize that the Jewish people in general are not behind him. This show of defiance against the world community and the United States for taking up a just cause is completely against the Torah.
American Orthodox Jews in particular, as loyal citizens enjoined by the Torah to respect their president, are embarrassed and completely disgusted by Netanyahu and his supporters' vicious attacks on President Obama. We also wish to state that the Zionists have no right to control the Western Wall and other holy sites of Jerusalem. All claims the Israeli government makes to these places are baseless.
Furthermore, the recent U.N. General Assembly resolution that the State of Israel has no right to impose its laws on these places, in no way detracts from the holiness of these sites in the eyes of Jews.In these days of Chanukah, may the Almighty send a spirit of repentance into Jewish hearts, so that they look into the Torah and resolve to follow its guidance. And may we be privileged to see peace in the Middle East and the entire world. Amen.
-----------------
Related -  Naturei Karta
First Comment from Sid Green
I have commented that Talmudism does not always go along with the Illuminati agenda. This group happens to be in the right here, with all the unjustified hatred of it in Israel. This group of Jews does not follow Cabala; they are just regular Jews who aren't Satanists. The Satanic ones did not see the exile as a punishment, and didn't see it as a sign of the need to follow Torah law more closely.
There is strong negative propaganda against Neturei Karta in Israel, and its sad to find out that they are hated for simply being good Jews and standing up for the truth. Refusing to believe that they were punished, the Satanists threw morality out the window. Apparently in Babylon some of the Jews remained faithful despite the heavy pagan influences which molded the Cabala. Most of the Jews who believed this kind of thing were targeted by the Illuminati Kapos and eliminated in Poland. The Jews in Israel today are not God conscious except a few.

Like it matters what these particular Jews think. They are playing right into the globalists hands. The Elite do not want Jerusalem to be divided. Nor shall the Palestinians or Israel have it. I admit I do not know how they have it planned, but the Palestinians new recent rights to East Jerusalem (due to the passed UN resolution) will be denied somehow. Terror attacks all over the world? Major conflicts perhaps? Unless something happens to hinder them their plans will go forward.

Clearly one major victory has been achieved. Israel is further along to one day finally end up in the planned pre-1967 borders with a fully lost Jerusalem. No they won't end up with West Jerusalem anymore than the Palestinians will end up with the Eastern part.

Jerusalem will be the capital of a United Religion. Shimon Peres in 2014 was allowed to disclose the plan though he left out the part that it would be based in Jerusalem. There are excellent sites out there dealing with how the Vatican wants to get Jerusalem. And now we know that it is to create a world religion...a cornerstone for the globalists:

Peres indirectly admitted that he expects it to happen in the Pope's lifetime. He is 80 now and is no doubt considered a leading candidate to head the United Religion. So by early next decade the world religion will be created and headquartered in Jerusalem unless something happens to hinder it.