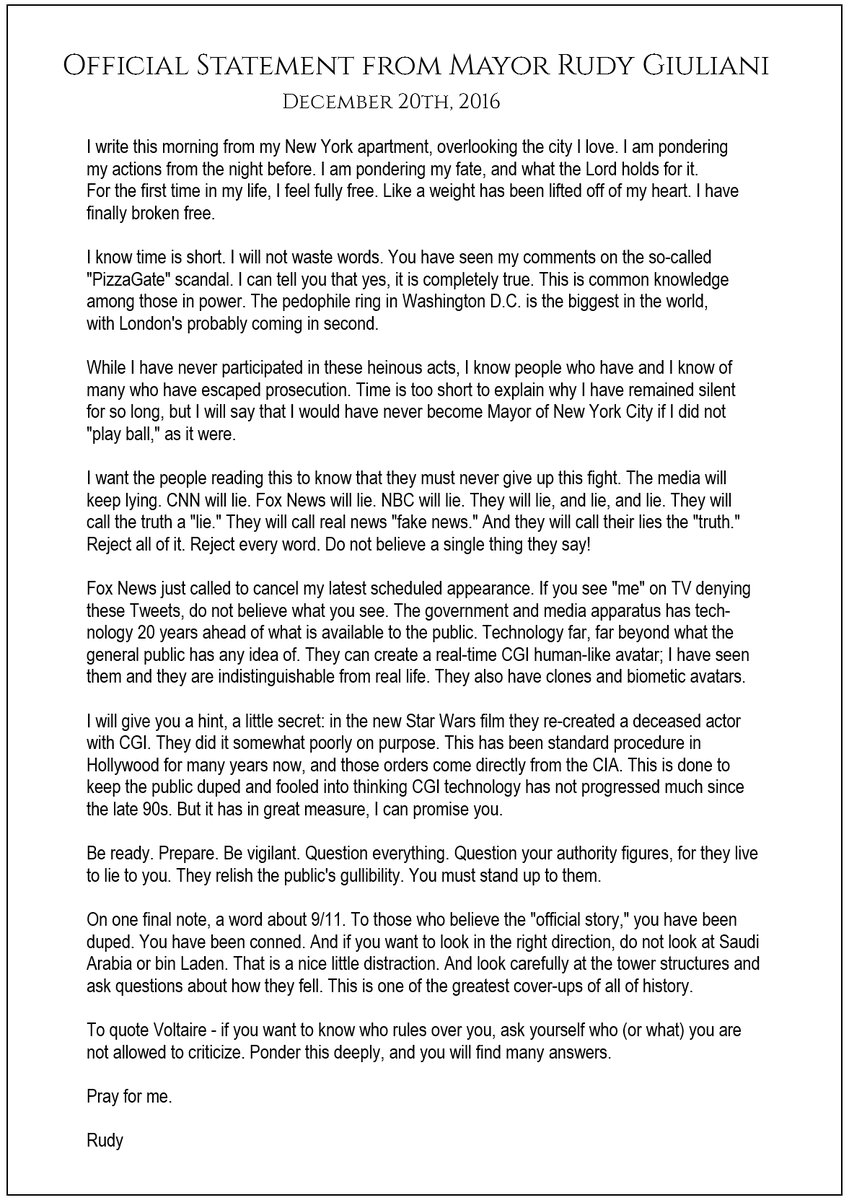 Latest- Giuliani appeared on Fox this morning. He said Fox had cancelled. I don't believe this was CGI. Obviously the above statement was a scam to promote the fake news narrative. It's interesting the government is going to so much trouble to
discredit the truth and truth seekers.
Yesterday--  Twitter suspended this account.  Here is the archived page.  "Giuliani" says he has been threatened.  Snopes, no doubt a CIA front, is saying this account was suspended because it was an imposter. It looks real. It still is the main account listed by google. They say he had no Twitter account. There is another started in August with 70K followers but no tweet since Dec 1.  It's possible this is an "official" Twitter feed while the suspended one was personal. It's also possible the suspended one was indeed a parody account. "There are about four of them out there that pretend to be me," RG told Chuck Todd in October.
But he didn't say, "I don't have a Twitter account."
But how does a "fake account" get 11,000 followers in nine months? Why would he tolerate it? What "Giuliani" says in his Statement is true. It's possible he was spurred by his rejection for Sec. of State.
It's also possible that this is a "fake news" psy op. i.e. A phoney RG reveals the truth and then the real RG denies he said it. Thus the real truth is discredited.
My view is that the truth is never a hoax. I am concerned however that this Statement wasn't on his official Twitter account, the one with 70K followers.
As Glen says (Comments), this does seem "too good to be true." But I'd rather be thought gullible than risk discounting a genuine whistle blower. I believe man's higher nature does shine through and will triumph.

Yes, but there were many fatalities from inside the towers, no shadow of doubt about that. I had the janitor of the North Tower, William Rodriguez
staying with me 3-4 times here in London post 911 - he was the so-called Last Man Out who went 3 times back into the burning building to rescue those
trapped inside and got a medal from George Bush. He then campaigned for a Commission of Inquiry, then his own evidence was ignored by the Commission.
He came over to lecture in the UK & Europe on the 'inside story' of 911 in the mid-2000s.

In fact several technologies were deployed to bring the towers down/minimise the debris-field, one of them being scalar weaponry delivered by helicopter above each building to trigger the process of demolition. This
accounts for the massive dust-cloud of particulate that literally blew away from the site.

The fact that multiple technologies were used and that people didn't/don't know about scalar weaponry gave rise to a lot of wearisome bickering and infighting in the UK 911 truth movement and broke it up into factions -
which was probably pre-intended, as well.

"And look carefully at the tower structures and ask questions about how they fell. This is one of the greatest cover-ups of all history."

These statements are too cryptic for a man of Giuliani's education, intelligence and knowledge of New York building codes.

Giuliani knows the WTC was engineer rigged with micro explosives the purpose of which was to collapse these structures into the smallest possible debris field during a demolition.

Quire literally, they could drop these buildings during a routine day without shutting down commerce, which they did. It was unethical as hell, and the fallout injuries on the ground were numerous, but the death manifest alleging occupant deaths was faked.

There may have been some explosive upgrading just prior to 911, but the building was rigged for demolition during it's construction.

Revealing this information to the public tandem with Giuliani's alleged confession would have given this missive credibility.

The writer had no knowledge about this, hence this was not authored by Rudy Giuliani, in my opinion.

The letter has something to do with this (encryoted/see 15th paragraph):

Giuliani is a monster.

I have one question, if Rudy G is genuine why hasn't he exposed Mossads role in 9/11?
And have any Republican names been leaked yet in regards to Pizza Gate? Are we supposed to believe there are no devils on the Right?

Surely Fox and Friends should have asked RG about the explosive Dec 20 tweets. If that query is absent, we have good reason to question the assumption that the interview was really on the morning of the 21st. The CGI angle is a more questionable one. I would suspend judgement on this for the time being. No need to rush.

Henry, if this is true, as I hardly dare to hope, that Rudy Giuliani and members of the intelligence services have had a real change of heart, in genuine repentance for what they have done, no matter how depraved, trying now to confess, expose this evil and rescue the victims, then I shall certainly pray for their souls. It's never too late to turn back from the dark road, cast out evil, and turn your heart to Christ, whose sacrifice washed their sins away. All Heaven rejoices at every sinner saved.

I am laughing this guy is totally corrupt he knows the truth about 9-11 he was made a knight for his part in it , plus he loves to cross dress there all mentally sick

Your site remains my first news site I visitâ€Ž whenever online. These Giuliani tweets were never confirmed by him that I can find. Also the account is closed so we can't see the type of subject matter his "personal" account covered compared to his mayor Giuliani aug16 official account. I personally think it's a hoax. Giuliani is establishment. Rudy a genuine whistle-blower, I severely doubt that. We will see, I thought whistleblowrs face the music? He's even calling 911 inside job brought to you but those you can not critize? How convenient.

The link below is a channel amtv. Called pizza g ate s a trap. It's interesting take.
https://m.youtube.com/watch?v=AhUqD285boM

I am not able to say for certain one way or the other, Henry, but the purported "Official Statement From Mayor Rudy Giuliani" certainly smells like a hoax to my sensitive nose.

This was reportedly a fake account that is not associated with Giuliani. Why get worked up about it?

Didn't know that at first. it is interesting that government agencies are perpetrating hoaxes of this kind. Who else would bother?

No doubt about what Gulliani said about CGI is true. If you have a big enough computer and enough time you can create a video that is as realistic as you want. This isn't true for real time processing. No doubt that their computers are much more powerful than ours, but I hope people recognize that the claims of the free energy groups often violate basic principles of science and they form part of the propoganada matrix.

Good news for a change. Gulliani must feel really good about himself, a huge weight lifted from his shoulders.

"If it sounds too good to be true, it probably is"

Although everything in this letter is spot on and absolute truth, I cannot for the life of me believe Rudy would ever spill the beans like this. Here are a couple of points to consider before telling yourself Rudy was the author.

1) Rudy ran the 9/11 operation's for NYC. He was instrumental in selling the psyop AND in the ensuing cover up. Admitting these facts about 9/11 would make him liable for a whole list of charges which could actually see him executed if he were ever convicted of those crimes.

2) Rudy would be a dead man walking - end of story(can you say Breitbart, etc.)

3)Rudy is a the ultimate "insider" with deep connections to ALL GLOBALIST.

Still want to know if trump is real?

Why wasn't Giuliani offered a position in his administration with all the campaigning he did for him. Rudy was his biggest supporter. Is Doug Christie next?

Could be some people in our intelligence community spoofing it and opening the next round of the inter-agency fight that occurred immediately before the election on the 4chan and Reddit venues.

In other words people in our intelligence community who have a conscience are leaking this information as they did before because they want this as a topic of discussion. It all must come out and justice must be done.

21:30 into this. Giuliani was in charge of an investigation of satanic ritual abuse at daycare centers on multiple military bases and covered it all up.