At Christmas, Yemen's Blood is On Our Hands 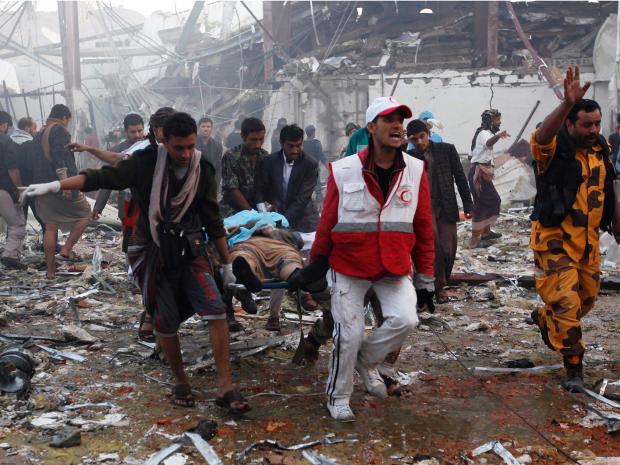 This attack on a funeral hall Oct 8 which killed hundreds was not the act of ISIS. This was the work of the people behind ISIS, Israel, US & UK. The Saudis are merely there to take the blame.
"Millions face starvation just so a dictator is returned to power."
The author is a young Yemeni housewife with a degree in English residing in central Sana'a. She is an example of the fact that Muslims are our allies in the resistance to the Zionist Occupational Government of the West. The Zionists are behind war, terrorism, ISIS and Islamophobia.
By Voiceless Yemen
(henrymakow.com)
Sanaa -Twenty-two straight months of airstrikes, blockade and the silence of global complicity. This is life in ancient  land of the Queen of Sheba, Yemen. There are no flights , no embassies, no commerce, no electricity, no wages and no sign of relief anytime soon. This, in a region submerged by wealth, luxury and decadence which supersedes logic and limits.

(left, A diamond studded (4.8 million USD) Mercedes owned by one Saudi prince is only the 38th in his collection.)
The October 8th airstrike on a funeral hall gathering in Sana'a is a hallmark example of insanity of Saudis led warcrimes on Yemen.
https://youtube.com/watch?v=xDEJrNXFAqQ
A hall packed with nearly 3,000 people being viciously struck not once but twice (double tap) by a high flying F-16 fighter jet.  The result: hundreds killed and injured in one of the bloodiest and boldest attacks on civilian targets in modern day history. This was not the act of ISIS. This was the work of the people behind ISIS. This was the work of Israel, US and UK. The Saudis are merely there to take the blame. This is why, in June, they were protected when the UN declared the airstrike killings in Yemen as warcrimes on children.
The axis of evil bailed out their cronies and prolonged the killing and destruction of Yemen. 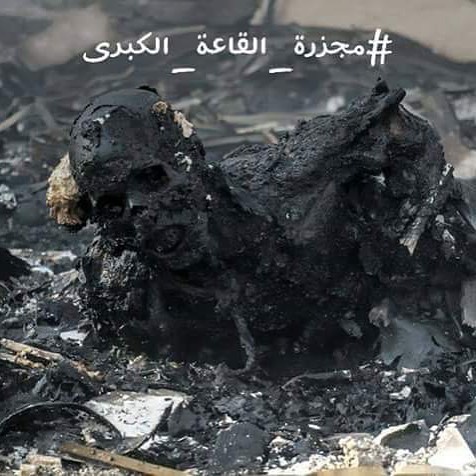 (left, Hell on earth. Burned corpse of funeral hall airstrike bombing victim)
Ex-president and Saudi/Western puppet, Hadi, still claims to be president and still is issuing executive orders out of a hotel in Riyadh.  He resigned and fled in 2014, but his Zionist masters are godlike. They can rise the dead back to life.
A conspiracy to liquidate most of the paper currency in Yemen was followed by a 'presidential' order In September to move the central bank from the capital Sana'a to the currently occupied (by British agents UAE) port city of Aden.
This move was deemed catastrophically inhumane by all observers. Since most of Yemenis are dependent on some form of a government salary many are barely coping. Up until now, the central bank in Sana'a has only been able to pay a fraction of overdue salaries. The US/UK backed Saudi/UAE forces control the gas and oil fields as well as the ports, tariffs and boarder checkpoints. Most all federal revenue goes to the Saudi/Hadi camp while the vast population struggles to survive airstrikes, siege and now this economic warfare.
DOUBLE STANDARD
Syria has been destroyed by western backed terror groups just to oust one man. In Yemen it's the exact opposite. Millions face starvation just so a dictator is put back into power. It matters not the ambitions and desire of Millions who took to the streets to voice their approval of their current government and leadership.
All that matters is the "international community" who still recognizes the traitorous fugitives and unlawful puppet ex-government whom are hiding scattered in Saudi Arabia, Turkey, UAE and Qatar.
The Saudis, though the prime aggressor, has had the least to gain from this disastrous war; if you can call it a war. Since the start of the onslaught in late March of 2015, Saudis have not only managed to nearly bankrupt their economy, but they have also exposed and isolated themselves not just from the Muslim world but from an already restless and impatient global list of nations such as Russia.
In October Saudi government decreased government employee salaries by 20%.
Economic experts forecasts complete bankruptcy and meltdown of government in less than four years. The kingdom has bitten off more than it can chew. They have financed conflicts all over the Middle East and Northern and central Africa to the tune of billions of dollars. In Yemen, the war has cost the Saudis a mind boggling 800 billion dollars. Low oil prices are not helping either.
Teetering on the brink of not just financial collapse, the Saudis are also on the verge of a civil war for control of the throne.
Rumors and predictions has it that king Salman will vacate the throne by March 2017. If so, this would be the the very last days of this British-Wahabi kingdom.
WHAT ZIONIST-CONTROLLED WEST HAS DONE
Here's a sample look at what this Zionist/Western inspired onslaught looks like in numbers. It almost seems miraculous that Yemenis are still even standing up at this point. Amongst the Airstrike targets thus far has been:
5183 business establishments
254 factories
641 foodstuff warehouses
476 food trucks/deliveries
515 markets and shopping centers
294 gas and oil stations
216 gas taker trucks/deliveries
1376 farms/agricultural land
1553 government facilities
719 schools and learning institutions
675 mosques
263 hospitals and healthcare centers (including doctors without boarders)
202 tourist attractions (including UNICEF heritage sites, cities and structures) 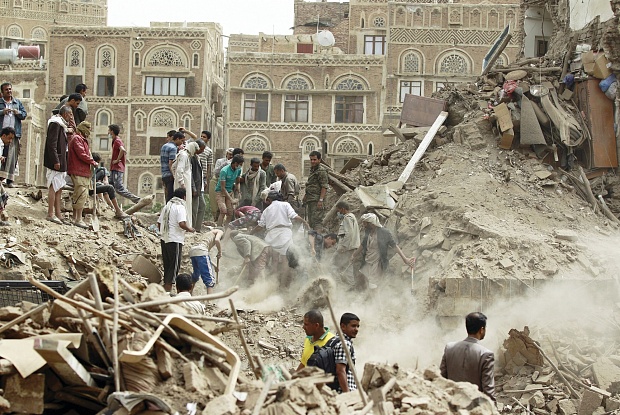 Left, 9th century mosque destroyed saudi-led airstrike on Sanaa
Although nearly obliterated, thanks to the over 300,000 airstrikes and blockade, Yemen still stands to emerge as victor. Not only is the impoverished nation surviving a 20 mega-nation coalition and a silent global complicity but they also managed to light the spark that will rid the world of this short-lived demonic British colony state of 'Saudi Arabia'. Now it's time for its sister state, the Rothschild parasitic entity known as 'Israel' to follow.
----------
Related - Yemen is Classic Western Imperialist War
------------------ Housewife Reports from War Torn Yemen
------------------ West Complicit in Rape of Yemen
------------------Why Yemen will be Donald Trumps' Litmus Test
----------------- The Muslim View of Life
Makow Comment - Clearly Western foreign policy has nothing to do with freedom, democracy or morality. It is a proxy for Zionist (Masonic Jewish Central banker) world hegemony. Given his "attachment" to Israel, this is not likely to change under Trump. Indeed this will be his litmus test.

Comments for "At Christmas, Yemen's Blood is On Our Hands "

Thanks for publishing another excellent expose on Yemen. The Yemenis are Shi’a, but the Wahabis were not only promoted as destabilizers by the British, but the Saudi family are closet Shabetai Zevi followers from Iraq.

In Leon DeGrelle’s first volume of the Hitler Century (the remaining volumes were relentlessly purged in nasty court cases against the Institute for Historical Review), Laurence of Arabia is exposed as a double-agent flagrant homosexual who was later “offed.” For oil, and I think primarily Zionist reasons, the /Brits backed the Saudis against the Hussain family, who were respected as the true rulers of the Hijaz holy cities. Lowell Thomas got his sordid start in this Arab “liberation.”

What in the world is going on here?

We, collectively as the human race, should be outraged and ashamed for allowing this to happen to innocent human beings who only wish to survive to work and feed their families.

Bombing medical facilities shows the immaturity and irresponsibility of these juvenile criminals that use their latest military industrial toys to destroy everything in that country because they didn't get everything they wanted.
We obviously, as a world, are going backward at an accelerated pace. Along with this has come a new low of immaturity that cannot mentally or spirituality grasp the value of God given life.