Communism a Facade for Plundering the Goyim 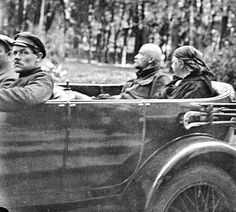 (Lenin riding in Rolls Royce stolen from Tsar)
Yesterday's article, NWO, Communism & the Kahal  argues that
embezzling the goyim was institutionalized in the secret Jewish governing
body, the Kahal, and the Bolshevik Revolution simply extended this policy.
Below find three excerpts. The first confirms Germany
(i.e. German Jewish bankers) financed the "Russian Revolution"
and turned Lenin and Trotsky into millionaires.
This is followed by reviews of the book "History's Greatest Heist:
The Looting of Russia by the Bolsheviks" (2008)  by Sean McMeekin.
"After Lenin claimed three luxury cars from the imperial garage for his own use, he lost one of them--a Delaunay-Belleville limousine--to gunmen in March 1918. After that, he had to console himself with two Rolls-Royces."
Serhii HRABOVSKY   German Jewish bankers funded the Revolution. Documents personal wealth of people's champions.
We might as well round off here, should it be not for a piece of information in The New York Times of April, 1921, stating that in 1920 alone, 75 million Swiss franks were sent to Lenin's account in one of the Swiss banks. According to the newspaper, Trotsky had 11 million dollars and 90 million franks on his accounts, Zinoviev - 80 million franks; the "knight of the revolution," Dzerzhynsky, had 80 million, while Ganetsky-Fuerstenberg had 60 million franks and 10 million dollars. Lenin, in his secret note to the Cheka leaders Unschlicht and Bokiy of April 24, 1921, demanded that they find the source of the information leak. However, it was never established.
Was this money also meant for the world revolution? Or is it a kind of kickback from the politicians and financiers of those countries where Lenin and Trotsky's "red horses" were not ordered to go? One can only hypothesize. Even now a considerable proportion of Lenin's papers is kept top secret.
Ninety years has passed since then, but revolutionary romanticism around the world keep maintaining that the Bolsheviks were passionate revolutionaries with high moral standards, patriots of Russia, and champions of Ukraine's freedom. Until now there is a monument to Lenin in downtown Kyiv with an inscription that reads that it is only via the union of Russian and Ukrainian workers that a free Ukraine is feasible, while without such a union, our freedom is out of the question.
Until now, on "revolutionary" holidays, people lay flowers at the monument to the man who was paid by the German intelligence. Unfortunately, even now a considerable part of Ukrainian society fail to perceive the huge difference between the leaders of the October revolt and the Ukrainian revolution of 1917 - the difference being that the Ukrainian revolution did not get any sponsorship from abroad. 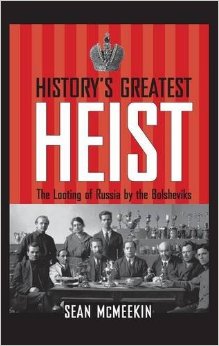 Simon Sebag Montefiore:
"Sean McMeekin is, as I have said, a scholar and master of the archives, but he rightly revels in this crew of shady capitalists, humbugs, thieves, crooks and assassins. Indeed the scale is eyewatering: more was requisitioned in eighteen months than the amount sent by the Nazis to Switzerland during the entire Second World War.
It begins comically with the inept attempts of the new Bolshevik masters to force Russia's worldly and cosmopolitan bankers to hand over their banks along with the contents of their safes. McMeekin introduces characters like Max Laserson, a top banker and industrialist who threw in his lot with the Reds as a financial expert. 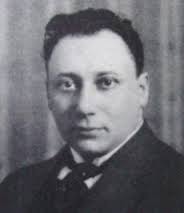 But the real anti-hero of the book is a Swedish banker named (((Olaf Aschberg, left, use google traslate))) who, though a successful banker and arms-dealer during the First World War, was also vaguely sympathetic to the Bolsheviks. This complex and highly intelligent man was to do more to fund the Bolshevik revolution than any other individual, and McMeekin's book does a great service in unveiling his interesting personality.
Next the Bolsheviks managed to seize the tsarist gold bullion - Europe's largest strategic gold reserve, worth $680 million. Meanwhile Lenin ordered the setting up of an organisation - the Gokhran, or State Treasury for the Storage of Valuables - to plunder and collect the private treasures and wealth of the rich nobility. (He himself borrowed the two Rolls-Royces and Delaunay-Belville limousine from the Tsar's garage, though amusingly the latter was actually stolen from him at gunpoint in 1918.)
Part of the looting involved the murder of the entire Romanov imperial family: Yurovsky, the organiser of the killings, estimated that the jewellery secured by this slaughter was worth $300,000. The next stage was the nationalization of all church property. Within weeks, the misguided writer Maxim Gorky, who was a member of the Gokhran, had helped fill countless warehouses with artwork, jewels, cutlery, silver, gold, furniture, books and other artefacts for sale abroad. The members of the committee posed with their swag in heaps - the warehouses sound like giant bandit's treasure troves. By December 1921, the swag was worth $450 million, or $45 billion in today's money....
Soon Bolshevik operatives, some of them trusted veterans and others shadowy wheeler-dealers, brought back hundreds of millions in cash in suitcases. The climax of the book comes when the Bolsheviks and Ashberg set up a huge gold and treasure sale in Reval (Tallinn), a Baltic city that rapidly assumed 'a wild west atmosphere, becoming a kind of Bolshevik boomtown'. The Hotel Petersburg was the Bolshevik headquarters, where a crew of Leninist ruffians and smooth operatives, Western adventurers and conmen, and the representatives of respectable American, French and British investment banks, bought the treasures of Russia. De Beers purchased Â£1 million worth of diamonds for Â£365,000 under Litvinov's negotiations, but he did better later when he sold jewels worth $10 million to an English buyer. In less than two years, Lenin had raised, through gold sales, $353 million (Â£35 billion in today's money).
Andrew Nagorski on the Bolsheviks' Crimes
Right at the beginning of "History's Greatest Heist: The Looting of Russia by the Bolsheviks," Sean McMeekin reminds readers that on the eve of World War I Russia was a formidable power on the rise. It was the world's largest exporter of food, especially grain, and, by 1914, it had amassed Europe's largest strategic gold reserves. The Russian ruble was fully convertible, and personal savings were growing at a rapid rate. "Rather like China at the beginning of the twenty-first century, Russia at the start of the twentieth was turning heads in its seemingly inexorable advance in raw economic power," McMeekin writes.
True, there were plenty of signs of troubles ahead and good reasons for social unrest: the lavish lifestyles of the super rich, starting with Tsar Nicholas II and the other Romanovs, hunger in the countryside despite bountiful harvests, harsh working conditions in factories and growing public and private debt. But McMeekin leaves no doubt that tsarist Russia in the early 20th century bore little resemblance to its portrayals in Communist propaganda later--and that, in fact, it was the Bolshevik Revolution's destructive power that dragged the country down and condemned its people to decades of poverty and terror. Within a remarkably short time, Russia's riches were plundered and seemingly evaporated into thin air...
At the top of the list was the Russian Orthodox Church. Announcing the nationalization of all church property in early 1918, the Bolsheviks instigated mob violence against churches and monasteries, which often led to the deaths of priests and parishioners trying to resist these assaults. While the campaign against the church is well known, McMeekin offers new details about the depth of cynicism of those who led it. The Bolsheviks would claim that the seizure of church property was needed to feed the hungry, particularly when the Volga famine broke out in 1921. But it was Patriarch Tikho, McMeekin points out, who had organized a far more ambitious program for famine relief than the Bolsheviks. In fact, when he requested permission to buy food supplies and set up relief kitchens for the hungry, the new authorities turned him down.
As always, the Bolsheviks were really interested in plunder for one reason: to finance their own needs--first of all, more weapons, and plenty of special shipments for the emerging new ruling class. Soon ordinary Russians began to realize that those who were looting in their name were helping themselves to whatever they wanted. Not surprisingly, some of them decided to carry out their own expropriations. After Lenin claimed three luxury cars from the imperial garage for his own use, he lost one of them--a Delaunay-Belleville limousine--to gunmen in March 1918. After that, he had to console himself with two Rolls-Royces...
In less than two years, the Bolsheviks exported over 500 metric tons of gold, raising $353 million in foreign currency. McMeekin puts the total value in today's terms at $35 billion. Then the gold boom was over; the incredible tsarist reserves were no more. But while they lasted, they allowed the Bolsheviks to win the civil war, finance the Red terror and open up new channels to the West, including to Germany. Soon the Bolsheviks were also disposing of precious art collections. America steel magnate and Treasury Secretary Andrew Mellon snapped up $6.6 million worth of paintings from the Hermitage, including masterpieces by Rembrandt, Titian and Rubens. Any moral qualms about such transactions had become purely rhetorical by that point.
--------------------------
Related-  Israel passes law to legalize theft of Palestinian private land
-----------  Reader takes exception with Nagorski's portrayal of Nicholas II

Comments for "Communism a Facade for Plundering the Goyim "

Henry, A brilliant article . Too bad we had to wait 100 years for all the truth to get out,but it's good in light of the fact that it shows that The same type of "Jews" are now kicking the remaining Palestinians off their land.These people never change. Thievery it seems is always "Good for the Jews", as Netanyahoo has recently said about 911. They already own America. Thanks, I'm off to get this book