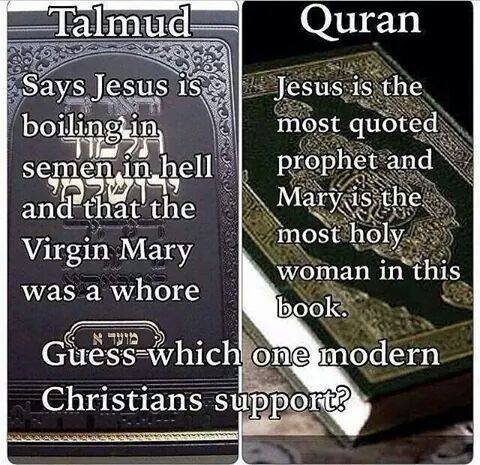 Comments for "Muslim Qu'ran is Wise to Ancient Satanic Conspiracy "

CGLivingstone said some nonsense about Judas being on the cross, but NOWHERE is that in Quran. Livi said (February 20, 2017):

Livingstone said some nonsense about Judas being on the cross, but NOWHERE is that in Quran. Livingstone also blasphemes in his book "Terrorism & the Illuminati" on page 38 "...this time, Joseph of Arimathea would have already removed the body, and conspired with the two Marys to spread the message that Jesus had resurrected from the dead." If Livingstone believed the Gospel-and-Quran, he would not say such things:

It may seem impartial or much patronizing but I know of very little people with so much love for the truth then David Livingstone and Dr. Makow.

Mr. Livingstone is a genius. A true researcher and seeker of truth. His humility and integrity are traits of Saints amongst us we know not of.

May you both be gathered With the Prophets, Martyrs, Followers of Truth and the Righteous.

4:69. And whoso obeys Allah and the Messenger (Muhammad ), then they will be in the company of those on whom Allah has bestowed His Grace, of the Prophets, the Siddiqun (those followers of the Prophets who were first and foremost to believe in them, like Abu Bakr As-Siddiq ), the martyrs, and the righteous. And how excellent these companions are!

Livingstone is notorious for using the "the enemy of my enemy is my friend" fallacy in his texts. Since he is a leftist Muslim, both unpopular positions in the West, he tries to hide his views with these tricks.
For example, he criticizes Trump and libertarians only to praise left wing policies.
He fails to see that the Luciferian elite controls both sides.

Now he does the same with religion. No Christian should support Islam just because Talmudists are bad or because they don't like Muslims. Both the Talmud and the Quran are anti-Christian and, according to the Bible, inspired by the same dark spiritual source. We don't have to take sides.

I would love to see David come clean for once and defend his views in a honest, upfront way.

I would suggest that Carl (below) listen to Lesley Hazleton so that he can understand the context of the verses he quoted from the Quran. The context is an environment in which certain groups of people were actively working to exterminate the ones who had converted to the monotheism being preached by the prophet Muhammad.

This TED talk by Lesley Hazleton clearly shows that Carl is misinterpreting the verses.


The comments from Carl were in the article titled “Muslim Qu'ran is Wise to Ancient Satanic Conspiracy”:

I think Carl and others would benefit from this simple explanation (https://i.imgur.com/ZgTji2n.jpg) and not take things out of context (a common tactic used to manipulate the uninformed).

i dont know whats Carls intentions but its clear he does not know what hes talking about.

maybe he is just another Zionist hasbara troll whose job it is to lie & spread mischief online or he may be one of the millions of brainwashed Christians who have bought the "Jews are Gods Chosen People" lie- hook, line & sinker.
u know, the type who support Trump 100 % bcos they believe that immigrants, esp them moozlims, are the source of all their problems..

He talks of the verses of the Quran quoted in the article as a "sanitised view"
WTF?

heres some violent passages from the Bible (taken from Wikipedia):

“When you approach a city to fight against it, you shall offer it terms of peace. If it agrees to make peace with you and opens to you, then all the people who are found in it shall become your forced labor and shall serve you. However, if it does not make peace with you, but makes war against you, then you shall besiege it. When the LORD your God gives it into your hand, you shall strike all the men in it with the edge of the sword. Only the women and the children and the animals and all that is in the city, all its spoil, you shall take as booty for yourself; and you shall use the spoil of your enemies which the LORD your God has given you. Only in the cities of these peoples that the LORD your God is giving you as an inheritance, you shall not leave alive anything that breathes” (Deuteronomy 20:10-17 -

Here is my advice to Carl and all those who speak of something they know nothing about or just want to go about speaking falsehoods:

Before you go quoting scripture from the Holy Quran, make sure you understand and read all verses in context as it is meant to be read otherwise don’t bother commenting on something you know nothing about or perhaps you do know the truth but want to sabotage it. God knows the intentions of the heart.

Thank you Henry for posting the article by David Livingston. All of us true believers from the Abrahamic faiths whether one is a Jew, Christian or Muslim should see that Satan is trying to divide us and create hatred amongst us. We are all brothers in the one God and should see our history –our story as one continuation. . For we turn to God and by doing so receive his grace and understand this war is not a war between us but against the enemy Satan.

Are they wise to their own scripture Henry? This sanitized view is a strange thing to read from a bright guy like Livingstone.

"Then, when the sacred months have passed, slay the idolaters wherever ye find them, and take them (captive), and besiege them, and prepare for them each ambush. But if they repent and establish worship and pay the poor-due, then leave their way free. Lo! Allah is Forgiving, Merciful."
Verse 9:5 teaches Muslims to commit mass-murder. The kafirs must either convert to Islam, who would keep up prayer and pay the poor-rate (zakat), or be murdered. Command for unconditional slaying of humans, God's own creations, by other humans – when presented as a sacred teaching of the almighty Creator – becomes a most evil teaching. Needless to say, such teachings never came from God.

Quran 9:29:
"Fight against such of those who have been given the Scripture as believe not in Allah nor the Last Day, and forbid not that which Allah hath forbidden by His messenger, and follow not the Religion of Truth, until they pay the tribute readily, being brought low."

Here, Allah the Islamic God commands Muslims to attack and kill the so-called 'people of the book' (i.e. Jews and Christians), until they are defeated and submitted to the supremacy of Islam and, in willing humiliation, pay jizya (submission) tax to Muslims.

This kind of mayhem is also seen in the Old Testament.

Hi Henry, Thanks for the article by David Livingstone.
What a pity that our countries in the west do not have a broad based Stop the War Coalition ( Except in England). Curtailing the wars would potentially aid the US economy, stop immigration from war torn areas and checkmate the Christian and Jewish Zionist war mongers. Instead we constantly fall for the divide and rule tactics and the usual ensuing scapegoating by certain people.