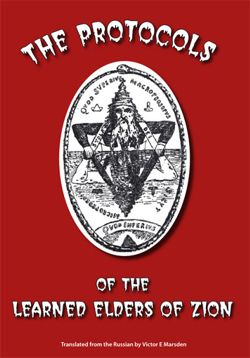 Illuminati Jews Double Cross Americans Once Again
by Lynda
It is impossible to have any reality based opinion on the subject of The Political unless one has studied The Protocols of the Elders of Zion as the template of Revolutionary history.
Of Trump, it should  be clear to the White nationalists like Smoloko that they have been played. Now is the time to reach out.
Protocol 12:11. "We shall set up our own, to all appearances opposition, which at least in one of it organs will present what looks like the very antipodes to us.  Our real opponents at heart will accept this simulated opposition as their own and will show us their cards."
It was essential to create the Trump phenomenon to identify the opposition to the globalist project at the grassroots in the American ZOG.  The Owners are now much better acquainted with their 'homegrown' opposition.  Trump has served this purpose so now he can nail his colours to the mast.
Zionism is definitely one of the infernal columns of the war that is shaping up. . The Jews who think they will have some kind of victory under the ideology of Theodore 'the Jews must suffer more' Herzl are delusional.  The Gentiles who think that ZOG can be can reformed by democratic means or that some form of White nationalism can rival that of The Crown and the Judaic supremacy are even more so.  People need an organization that recognizes and respects the identity of national heritage but is not based on it.
---------
The USSR, the Nazi national socialism, the USSA/EUSSR were all precursors of the Revolution (inaugurated 1789) in its global, totalitarian phase.  This would be Communism proper as set out in Marx's vol 3 of The Kapital. In the USSR and National Socialist model - the Owners own the state and administer the bank through the state.  In the latter model of USSA monopoly capitalism, the Owners own the bank which administers the state. Two models created by the same architect/s.
In the Communist phase what is needed to globally consolidate the wealth of all national assets are world wars.  Who owns the Bank of Russia?  Does the Russian state own the BoR or do the Owners of the Bank of International Settlements?  When we look at post USSR Russia vs the Zionist imperium: GOG and the ZOGs what we are seeing is the Grand Chessboard alignment that has been organised by the Masonic Agentur for WWIII.  The take-out of 7 nations in 5 years mandate, of which General Wesley Clark spoke in his famous interview, is one of the possible flashpoints. The Ukraine is another.  The gold backed Russian and Chinese currencies are another.