"Hitler Never Gassed His Own People" but the US Did 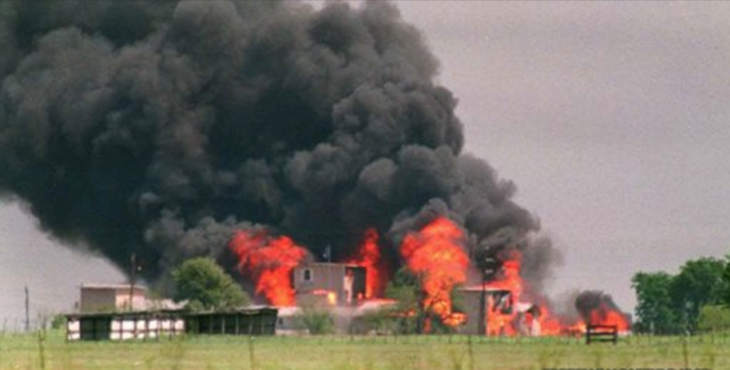 American Government Chemical/Biological Attacks On Its Own Citizens, Waco 1993
The spectacle of the US manufacturing a gas attack by Al Assad
was made all the more grotesque Tuesday when Sean Spicer said that "even Hitler did not use chemical weapons." He meant on his own people. As a reader, Glen, points out, only the US does that.
'I see the lies and propaganda we Americans are fed every day, and it makes my blood boil. What I really find disgusting and discouraging, though, is the gullibility of the people, who wouldn't know the truth, or even where or how to search for the truth if their life depended upon it."
by Glen
(henrymakow.com)
Here we go again. Another giant psy-op has been perpetrated upon the American people. I do not wish to proclaim the innocence or guilt of Bashar Assad, but to look at the perpetrator of the missile attack on the sovereign nation of Syria.

Our president ranted and raved about the inhumanity of Assad and then proceeded to launch 60 cruise missiles at Syria. Nations who live in glass houses should not throw stones.

Here is a short list of some of the atrocities carried out by the United States in its short 200 hundred plus years of existence. Most of the information comes from the Wikipedia page "Unethical Human Experimentation in the United States". https://en.wikipedia.org/wiki/Unethical_human_experimentation_in_the_United_States. These are chemical and biological experiments the U.S. carried out on its own soldiers and citizens.
1.  The first listing of a biological attack happened on the American continent before the United States was even a nation. "During the French and Indian War, Jeffery Amherst, 1st Baron Amherst, Britain's commander in chief in North America authorized the use of smallpox to wipe out their Native American enemy. In his writings to Colonel Henry Bouquet about the situation in western Pennsylvania,[12] Amherst suggested that the spread of disease would be beneficial in achieving their aims. Colonel Bouquet confirmed his intentions to do so."

2.  "In the 1880s, in Hawaii, a California physician working at a hospital for lepers injected six girls under the age of 12 with syphilis.[7]"

3. "In 1908, three Philadelphia researchers infected dozens of children with tuberculin at the St. Vincent's House orphanage in Philadelphia, causing permanent blindness in some of the children and painful lesions and inflammation of the eyes in many of the others. In the study, they refer to the children as "material used".

4.  " In 1911, Dr. Hideyo Noguchi of the Rockefeller Institute for Medical Research injected 146 hospital patients (some of whom were children) with syphilis."

5. "In 1950, in order to conduct a simulation of a biological warfare attack, the U.S. Navy sprayed large quantities of the bacteria Serratia marcescens - considered harmless at this time - over the city of San Francisco during a project called Operation Sea-Spray. Numerous citizens contracted pneumonia-like illnesses, and at least one person died as a result."

6. "In 1963, 22 elderly patients at the Jewish Chronic Disease Hospital in Brooklyn, New York were injected with live cancer cells by Chester M. Southam, who in 1952 had done the same to prisoners at the Ohio State Prison, in order to "discover the secret of how healthy bodies fight the invasion of malignant cells". The administration of the hospital attempted to cover the study up, but the New York medical licensing board ultimately placed Southam on probation for one year. Two years later, the American Cancer Society elected him as their Vice President."

7. "From 1963 to 1969 as part of Project Shipboard Hazard and Defense (SHAD), the U.S. Army performed tests which involved spraying several U.S. ships with various biological and chemical warfare agents, while thousands of U.S. military personnel were aboard the ships. The personnel were not notified of the tests, and were not given any protective clothing. Chemicals tested on the U.S. military personnel included the nerve gases VX and Sarin, toxic chemicals such as zinc cadmium sulfide and sulfur dioxide, and a variety of biological agents."

8. "In 1966, the U.S. Army released Bacillus globigii into the tunnels of the New York City Subway system, as part of a field study called A Study of the Vulnerability of Subway Passengers in New York City to Covert Attack with Biological Agents.[48][53][54][55][56] The Chicago subway system was also subject to a similar experiment by the Army."

9.  "Researchers in the United States have performed thousands of human radiation experiments to determine the effects of atomic radiation and radioactive contamination on the human body, generally on people who were poor, sick, or powerless.[57] Most of these tests were performed, funded, or supervised by the United States military, Atomic Energy Commission, or various other US federal government agencies."

"In 1953, the U.S. Atomic Energy Commission (AEC) ran several studies at the University of Iowa on the health effects of radioactive iodine in newborns and pregnant women. In one study, researchers gave pregnant women from 100 to 200 microcuries (3.7 to 7.4 MBq) of iodine-131, in order to study the women's aborted embryos in an attempt to discover at what stage, and to what extent, radioactive iodine crosses the placental barrier."

"Immediately after World War II, researchers at Vanderbilt University gave 829 pregnant mothers in Tennessee what they were told were "vitamin drinks" that would improve the health of their babies. The mixtures contained radioactive iron and the researchers were determining how fast the radioisotope crossed into the placenta. At least three children are known to have died from the experiments, from cancers and leukemia.[72][73] Four of the women's babies died from cancers as a result of the experiments, and the women experienced rashes, bruises, anemia, hair/tooth loss, and cancer."

10."From 1942 to 1944, the U.S. Chemical Warfare Service conducted experiments which exposed thousands of U.S. military personnel to mustard gas, in order to test the effectiveness of gas masks and protective clothing."

11. "On November 19, 1953 Dr. Frank Olson was without his knowledge or consent given an LSD dosage before his death 9 days later. For 22 years this was covered up until the Project MKUltra revelations."
12.  Chemical weapons were used to kill children at Waco in 1993.  A filmmaker found a shell casing from a certain type of inflammable tear gas round. 76 men, women and children died in the inferno.

The above listed stories are but a minute sampling of the experimentation carried on unknowing populace and military by its own government. It cannot help but prove of the hypocrisy with which anyone in our government speaks. Some will say this is all from days past, but I could not dis-agree more. Here are a few chemical and biological attacks carried on to this day in America.

Water Fluoridation in America from what I can find comes in at around 69% today, while  97% of the western European population drinks non-fluoridated water. According to the world's oldest and most prestigious medical journal, The Lancet, fluoride is a neurotoxin classified the same as arsenic, lead, and mercury.

Our skies are sprayed on an almost daily basis, some say to save the planet(geo-engineering), some say for more nefarious reasons. Some of the known contents of these "chemtrails" are  barium chloride, aluminum oxide, synthetic polymers, bio-nano particles, and ethylene dibromide.

We are fed ever growing amounts of GMO foods in the U.S. 38 countries around the world have banned all GMO foods due to their known links to cancer.

Our children are subjected to insane vaccination schedules in America. It is now as high as 80 different inoculations before a child reaches the age of 2. One in 68 children in America is now diagnosed with autism. In the 70's and 80's the numbers for autism was around 1 in 2000. Children now receive up to 12 times as many vaccines as they did in the 1940's.

So, Mr. President, If you are looking take out the largest purveyor of chemical/biological warfare attacks in the world today, maybe you need to target Washington, D.C.
---------------
Related -  Actually, Hitler did gas his own people, the mentally retarded.
-----------  The Horrifying American Roots of Nazi Eugenics
-------------The government sprayed radioactive particles over St. Louis and other cities...  (Thanks M)

The sins of the powers-that-be in the United States government are multitudinous. Although it's not chemical or biological in nature, let's not forget their role in destroying people's lives under the MK Ultra program. I'm not referring to the LSD part, just the overall psychological trauma. Even Canada played a part in that disaster.

The United States government is a very large domestic and foreign terrorist organization. It is actually the worst government on the planet as it provokes tyranny and chaos wherever it rears its ugly head. The government is completely demonic. I think most people like being under the their "massa's" thumb. All people are being treated as slaves and/or niggers by their own governments. But I think they like it that way. You don't have to use any critical thinking skills, all you have to do is say, "Yes, Massa! I'm yo nigga." This is how we live in peace; do what you are told, comply or die.....nigga... Tax day coming? Pay up nigga.