Allies Prepared to Use Chemical Weapons in WW2 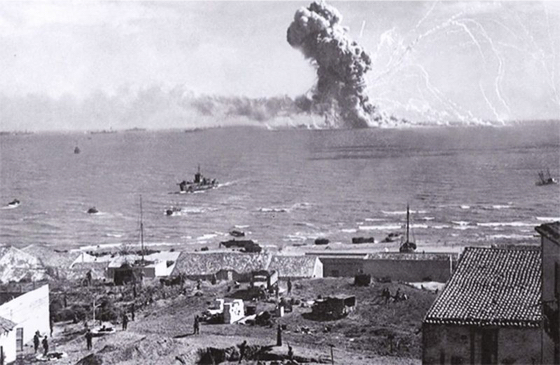 (l. Smoke arising from Bari air raid)
All the combatants in WW2 had agreed
not to use chemical weapons. However
the Allies had contingency plans as
seen when the Nazis bombed a
shipment of US mustard gas
in the Italian port of Bari in Dec. 1943
with devastating effect on US sailors.
by John Hamer
(henrymakow.com)
At the outbreak of World War Two, both sides had poisonous gas shells.  However, the pre-emptive use of chemicals in warfare was strictly forbidden by Hitler and any retaliatory action required Hitler's approval.  In fact, he vetoed several proposals by his Generals to use poisonous gas on the Eastern front.
The first instance of the use of chemical weapons in WW2 occurred on 8th September 1939 in Southern Poland.  The Polish army used a chemical bomb on a battalion of German engineers attempting to bridge the River Jasiolka.  The bomb exploded, seriously wounding twelve and killing two.  A subsequent investigation into the incident revealed that the bomb was manufactured in England.
By 1940, England had determined that they would use chemicals should the Germans invade. In June 1940, Winston Churchill ordered General Ismay to prepare for the use of chemicals against German forces. In April 1942, Churchill offered Stalin 1000 tonnes of Mustard Gas.  However, Stalin declined and instead requested 5000 tonnes of chlorine with which he intended to use to produce his own chemical weapons.
On 10th May 1942 Churchill claimed in a radio speech, without any evidence, that the reason for Germany's rapid advances in Russia were due to chemical weapons.  He added, "We know the Huns, which is the reason why we are building up our storage of chemical weapons. I would say that should Germany again attack our ally Russia with more chemical weapons, then we will start using gas in our attacks on German cities and towns."
BARI RAID
The SS John Harvey was assigned to deliver a shipment of chemical weapons to Allied forces during the invasion of Italy.  FDR had these chemical weapons shipped to the Mediterranean theatre 'just in case they were needed.' The John Harvey was anchored in the seaport of Bari, near the heel of Italy with its hold containing more than 2,000, 100 lb  mustard gas shells. 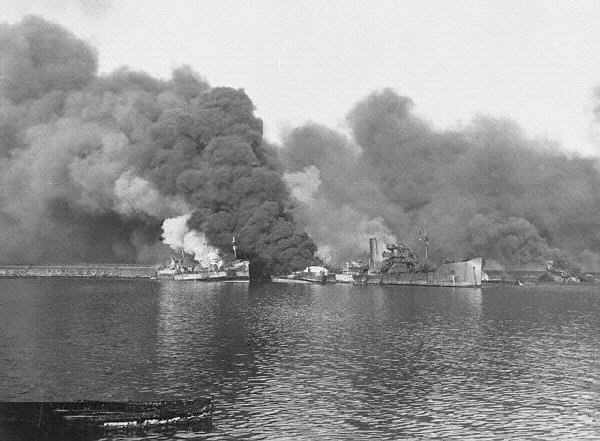 Bari was one of the principal ports supplying the Allies during the invasion. The ship was waiting for its cargo to be offloaded when on Dec. 2, 1943, the port was subjected to a major German air raid, with 105 Stuka dive-bombers, powered by their General Motors engines.  The twenty-minute raid was so massive that it put the port out of commission for more than two months and seventeen of the thirty ships attacked were sunk.  The John Harvey was not hit directly, but it was showered with flaming debris and soon caught fire and exploded, unleashing its deadly cargo onto its crew and indeed the unsuspecting town.
Every member of the Harvey's crew and escort was killed, 74 in total. Rescuers had no idea with what they were dealing.  Mustard gas needs to be countered before contact with a very specific treatment. The entire area needs to be washed down with bleach or a mixture of substances named DS2.  Not realizing that this was required, many rescuers succumbed to the attack whilst trying to save the victims.  For example, HMS Bicester took thirty casualties out of the water but, being damaged itself, was towed to nearby Taranto for repairs.  By the time it got there many of its crew, were suffering from chemical burns and blindness.
By the time that the symptoms of mustard gas manifest themselves, it is too late to do anything, but even at that point the medical personnel could not understand what was going on, partly due to the secrecy of the cargo and partly because very few doctors had seen the consequences of mustard gas on the human body.
An expert on chemical warfare, Lieutenant-Colonel Stewart Alexander, was sent by the Deputy Surgeon General of the US Army to discover what was going on.  Lt.-Col. Alexander ran every test he could think of and eventually pinned down mustard gas as the culprit; he also used the technique pioneered by Dr. John Snow, of mapping the location of Cholera casualties in order to pinpoint the source of the problem and determined that the John Harvey was the culprit.
War-time secrecy gagged the official accident reports, but too many had witnessed the tragic event to make for a permanent cover-up operation and the US Army admitted, a few months later, that the John Harvey had indeed been carrying that deadly cargo.  Nevertheless, the incident remained lost in the chaos of 1944 and documents pertaining to it were not declassified until 1959.
COVER UP
In all there were 628 known casualties, including 96 deaths, but there were probably many more. As well as the port, the town itself had also been affected by the cloud of vaporized mustard gas that had drifted almost unnoticed across the landscape, in all the smoke and mayhem.  The civilian population of Bari had scattered into the countryside during the raid and presumably would have had to deal with the effects of the slow-burning chemical alone, far away from where anyone could either offer assistance or take official notice.
Although US records did mention mustard gas, Winston Churchill insisted as part of the cover-up, that all British Medical records were expunged and that mustard gas deaths and injuries were merely listed as the result of, 'burns due to enemy action.'
The Bari raid was a disaster on two fronts for the Allies.  Firstly, it was dubbed the 'Second Pearl Harbor,' with 17 ships totalling 75,936 tons sunk, and another 7 ships with a total of 27,289 tons, heavily damaged by the German aircraft.  This was the only known poison gas incident associated with WWII, rendered far worse by the inherent secrecy involved.
The German scientist Fritz Hahn found plans in an archive in Washington DC showing that USA planned a gas-war against Germany.   According to the US-plans they should start a 15-day operation "...using gas bombs after the Axis-Countries have started the bombing."  The result of this operation was calculated to result in 5.6 million dead and 12 million very sick Germans - so sick they would need prolonged medical attention.  The German cities of Munich, Augsburg, Stuttgart and Karlsruhe were the main targets of the plan with the Americans intending to use 100 airplanes with 500-pound poisonous gas shells over Germany.
This was all first made public in 1984 when the world learnt the truth about English plans regarding using poisonous gas over Germany. The BBC reporter Robert Harris found documents regarding the use of chemical and biological weapons against Germany.
These documents clearly showed Churchill's intentions and the chief of the British high command, General Lionel Hastings quoted Churchill, thus... "I want a cold-blooded war to be started using poisonous gas...  We can bomb the cities along the Rhine and many others with gas until most survivors will need medical care for the rest of their lives."
---
John Hamer is a British researcher and author.  Twitter: @johnhamerauthor
Web site: http://falsificationofhistory.co.uk/onecoin/
Books:  http://www.amazon.co.uk/John%20Hamer/e/B00B8X4CB6/ref=la_B00B8X4CB6_af?rh=n:266239,p_82:B00B8X4CB6&sort=author-pages-popularity-rank

Comments for "Allies Prepared to Use Chemical Weapons in WW2"

Not only the allies. Because german troops were testing a form of fuel-air bombs in the eastern front, the brutality of the devices confused the opposing forces, who threatened to use mustard/chlorine gas if the use of such bombs was to be continued.