Terror Distracts from Traitors Within 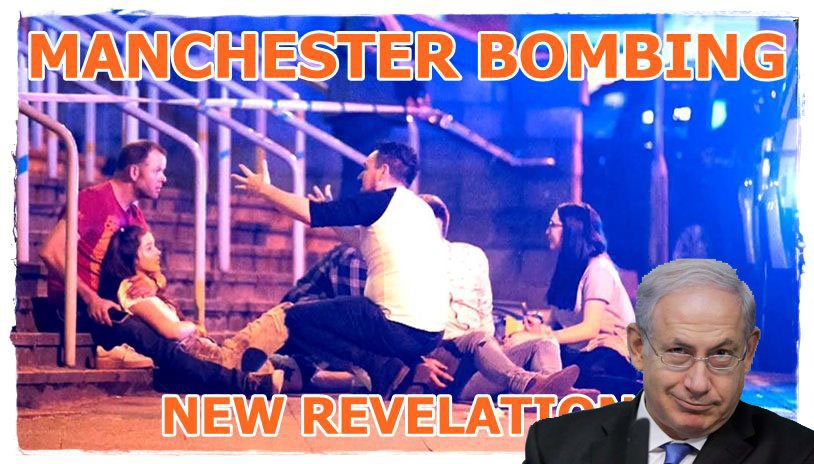 What do the Protocols of
Zion say about terror?
'IT IS FROM US THAT THE ALL-ENGULFING TERROR PROCEEDS.'  Protocols of Zion, 9-4
"Our fight is your fight," Bibi
Terror is mentioned about a dozen times in the Protocols of Zion as a way of ensuring total submission to Masonic Jewish world government.
"The GOYIM are a flock of sheep, and we are their wolves. And you know what happens when the wolves get hold of the flock? "  Protocols of Zion, 24-4
Terror We're Being Suckered
Updated from July 16,2016
by Henry Makow Ph.D.
I am amazed by the universal acceptance of the narrative that we are under attack by "Islamic terrorism."  We are under attack alright, by our own traitorous colonial "elite".
"Islamic terrorists," like the nail bomber in Manchester, are controlled by intelligence services who serve the Masonic Jewish bankers and their world "super government." 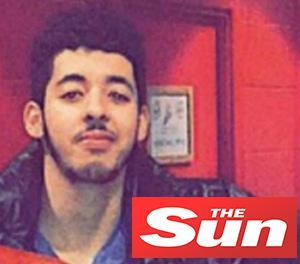 (left. ISISrael patsy Salman Abedi)
Naturally Abedi died at the scene. The patsy always dies so he can't reveal who put him up to it. The media, both corporate and alternate, are complicit in this criminal treason by promulgating the false narrative.
At the same time as ISIS is blamed for attacks in Manchester, Paris, Orlando and Nice, evidence emerges daily that ISIS is funded and controlled by the CIA and the Mossad.  The Israelis have even stated they don't want to see ISIS defeated. In other words, they are complicit in the wanton terror afflicting the West as well as all other heinous atrocities by ISIS. No one comments on the contradiction.
In The Other Side of Deception (1994) Mossad defector Victor Ostrovsky describes how the Israelis routinely supplied explosives to European extremists. (pp.3-4)
What do the Illuminati hope to achieve by a "massacre" like Manchester purports to be?
1. Satanists rejoice in killing people. 2. Terror is conducive to empowering the government which is controlled by the perpetrators of the terror. 3. The Christian and Muslim goyim must fight each other and not notice the puppet masters. At the same time as they promote Islam as a bogeyman, they import millions of Muslim migrants, increasing the pressure to explosion.
THE PROTOCOLS OF ZION
For further insight into the bankers' motivation, I searched the word "terror" in The Protocols of Zion, the blueprint for the Masonic Jew World Order.
In 1-3, we learn "the best results in governing [men] are attained by violence and terrorization, and not by academic discussions." Also, "rare indeed are the men who would not be willing to sacrifice the welfare of all for the sake of securing their own welfare." Hence our "elite." 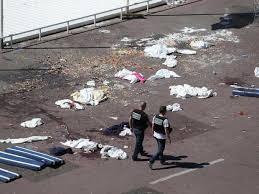 (Nice truck atttack)
In 1-24, we learn that "Our [Jewish] State...[finds it] necessary to maintain the terror which tends to produce blind submission... for the sake of victory, we must keep to the programme of violence and make-believe." [i.e. false flags, bogeymen]...we shall triumph and bring all governments into subjection to our super-government.
In 7-5, they use the media manipulate public opinion. "The press which with a few exceptions ...is already entirely in our hands."  Their program is "nearing consummation" and this was more than 100 years ago.
"To sum up our system of keeping the governments of the goyim in Europe in check, we shall show our strength to one of them by terrorist attempts and to all, if we allow the possibility of a general rising against us, we shall respond with the guns of America or China or Japan."
This line suggests they use terror to punish uncooperative countries, and that their control is worldwide. 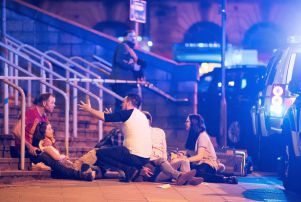 (Manchester aftermath looks staged)
In 9-4, we learn "IT IS FROM US THAT THE ALL-ENGULFING TERROR PROCEEDS. We have in our service persons of all opinions, of all doctrines, monarchists, demagogues, socialists, communists, and utopian dreamers of very kind. We have harnessed them all to the task: Each one of them ...is boring away at the last remnants of authority, is striving to overthrow all established form of order. By these acts all States are in torture; they exhort to tranquility, are ready to sacrifice everything for peace: BUT WE WILL NOT GIVE THEM PEACE UNTIL THEY OPENLY ACKNOWLEDGE OUR INTERNATIONAL SUPER-GOVERNMENT, AND WITH SUBMISSIVENESS."
5.  "In order to carry on a contested struggle, one must have money, and the money is all in our hands."
CONCLUSION
In summary, they are going to terrorize the public into blind submission. Increasingly, they are imposing their tyranny, not only in terms of terror attacks but --
1. By opening the floodgates to  invasion of migrants from the Third World. Clearly, they intend to use the poverty stricken masses to conquer the West.  2. Brazen promotion of homosexuality and banning resistance to this malady. 3. General war on gender including gender neutral bathrooms. 4. Attempts to foment race war in US using police brutality as pretext, i.e. Black Lives Matter. 5. Attempts to ban free speech. People are losing their jobs or being investigated for expressing un-PC views.   All of this is Communism. A Masonic Jewish banker monopoly over everything. Masonic Jewish world tyranny , "super government."
Trump and Brexit promise some possible relief. But we must do our part by demanding freedom, identifying the "wolves" and refusing to be gulled by their "make-believe."
Related-    Insider Blamed Intelligence Agencies for Terror
------------ Manchester another drill-hoax?
------------Media Masks Ghastly Truth Behind Terror
--------------------Katy Perry's Globalist Take on Manchester
------------BBC announcer says terror permanent feature of European life
------------ISIS Claims Responsibility for Truck Attack  (Shows coordination with intel agencies)
------------Terrorism is an Extortion Racket
------------French PM Manuel Vas: 'We Must Learn to Live with the Terror, Like Israel'
--------------------Signs Nice may also be a Staged Hoax  --  Bodies Look Like Dummies
------------ Operation Gladio - Phoney Communist Terror
--------------------Hollande Extends Martial Law
First Comment from James Perloff: 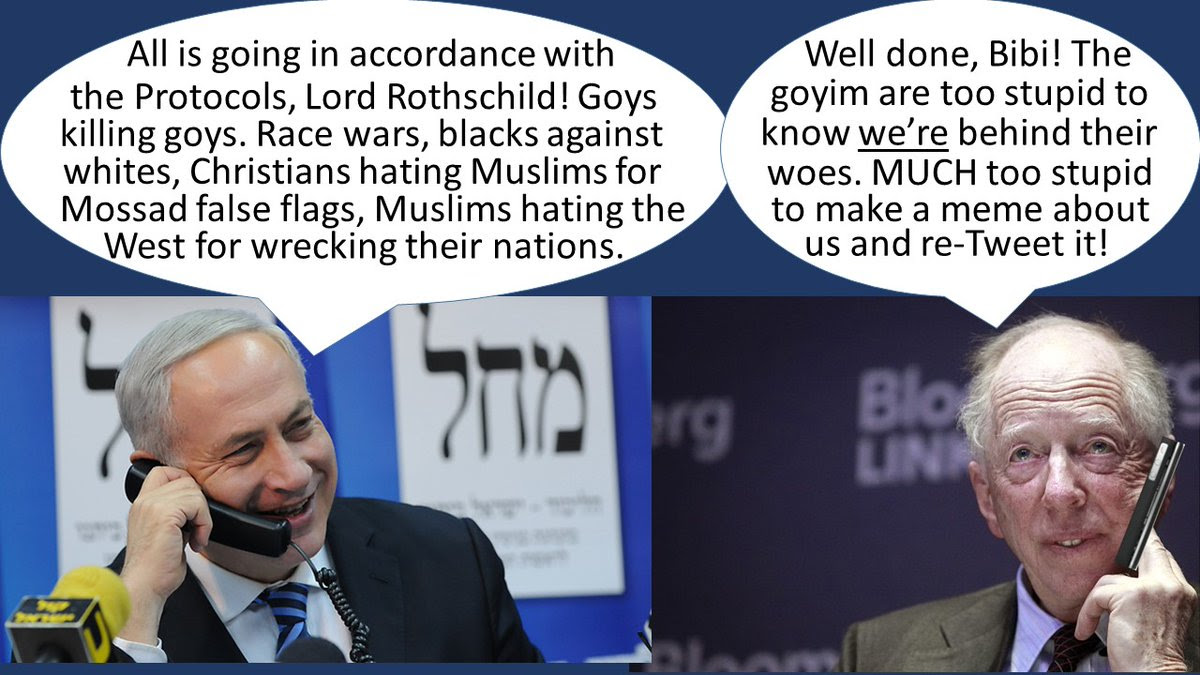 Comments for "Terror Distracts from Traitors Within"

Thanks, Henry. Powerful summary and I think your word "foment" is a summary of the summary because that's what they seem to be intent on doing every day: instigating hate, instigating fear, instigating division. It's The Great Foment!! And all the timely protocol with false-flags, economic demise, and presidential visits. I see that in two days he dipped in with the world's three major religions. Wonder if the Dalai Lama was offended. Ha! Well, those religions gotta keep the faithful hypnotized and obedient, so of course they are showcased as deeply important and dignified. Oh my goodness, when will we ever move from religion to spirituality or just plain decency?

You are the only resistance website telling the truth accurately Henry. The others mean well and are equally dedicated but very few other than yourself actually â€œget itâ€. Incredible that the Luciferians managed to divide you from Rense, Icke and others when you should be leading them.

These days one positively yearns to believe that one of these attacks is the real deal, if for no other reason than to avoid always being the professional contrarian. However the false flag merchants seem determined to make the official narratives of all these events as threadbare as possible - presumably in order to make all those who pretend to believe this stuff complicit in the big lie.

Last night I saw a girl at the concert on telly recount her own version of the Manchester attack: "There were a bang, they said, 'don't worry, it's just a balloon', but it weren't a balloon." So there we have it: we are told that a bang that could be mistaken for a balloon bursting, killed 23 people and maimed countless others. And as usual no footage of the bomb in spite of ubiquitous cctv and mobile phone cameras. And yet everyone, from PJW to the alt-right, accept the official story unquestioningly.

Have the American people been totally brain washed by T.V. , Hollywood, etc.?

Have the masses in America ingested to much fluoride, and to much aspartame?

Have they taken to many flu shots and vaccinations? Have they ingested to many GMO's and chemicals in their food? Have all these toxins landed in their brains and
are they now incapable of critical thought?

I am 71 years old and I remember the morning after Waco. I was outraged by this killing raid orchestrated by Bill Clinton and his attorney general Janet Reno. Posse
Comititus was ignored. Clinton and Reno should have been prosecuted, along withmany other co-conspirators.

The morning after I spoke to a number of people about
Waco. None of them were outraged. In fact they all said things like "Well they should
not have been a cult". ARE YOU KIDDING ME??

I knew then and there that the vast majority of the American people had lost their ability TO THINK. This happened a long time ago and the ability of people to engage in critical thinking has only deteriorated.

The Digital World we live in is the MAIN TOOL being used to
finish off the sucker acts from all over the world.

Only those who know where the REAL TRUTH is on the Internet
are able to stand off and SEE what is GOING ON and not re-
spond to the â€œLIES, LIES AND MORE DAMN LIES,â€ â€“ Mark Twain

I have a name for all this crap, OPERATION SHITHEAD.

How many are striking at the branches of evil while ignoring the root. The branches of evil would soon wither away were it not for copious watering from the West and its Gulf State allies. The latter are deliberately cultivating ethnic hatred for geopolitical purposes. I was listening to a well-known "alternative" media commentator today. 30 minutes into his program he made the patently idiotic statement that Saudi Arabia did 911. And this guy has millions of followers. We, indeed, are being suckered.