(Left, D.H. Lawrence and James Joyce)
In a satanic cult, such as modern society has become,
sickness is portrayed as health. Thus James Joyce who
indulged in coprophilia is treated as a shining beacon
for society.
An obsession with human excrement is one of the hallmarks of Satanism, so it may be no coincidence that as scatology, and even coprophilia, have been mainstreamed in sitcoms and popular culture generally.
by Jude Duffy
(henrymakow.com)
James Joyce's  celebrated novel Ulysses was irredeemably filthy. So said D. H. Lawrence. In spite of Lawrence's assessment, Ulysses was widely hailed as a work of genius, and Joyce is still regarded as one of the giants of 20th century literature. In Ireland, in particular, liberal anti-Catholics predictably lionized him as a national martyr for the cause of free expression against a repressive authoritarian Church.
Yet Ulysses really was "filth", or at least deeply preoccupied with filth. The book dwells at considerable length on the excretory bodily functions of the main characters. 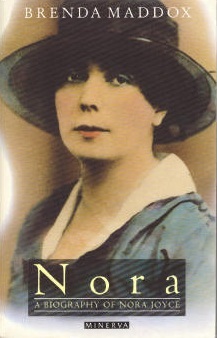 Champions of Joyce, including the Anglo- Irish literary academic and homosexual activist, David Norris, insist that the author doesn't devote any more attention to toilet matters in Ulysses than they merit in the account of a  normal day (which is what the book purports to be.) But in truth, the stream of consciousness soliloquies of the book's heroine Molly Bloom suggest an author in the grip of a rather unhealthy obsession with women's excretory functions.
In any case Joyce's own letters to his long-time lover and eventual wife, Norah Barnacle, confirm that he had strong coprophiliac tendencies: If asking one's sexual partner to pooh on you isn't filthy, what exactly is? Faeces is synonymous with disease, foul smells, flies, and so on, so to call Joyce's fixation unhealthy is not simply a figurative use of the term. This is all documented in Brenda Maddox's book Nora (1988) from Nora's letters.
We have seen in Joyce's 1909 letters to Nora that Joyce was avidly coprophilic. Joyce scholar Clive Hart states, 'There can be no denying that Joyce found everything associated with evacuation unusually pleasurable...' In Finnegans Wake Kate's monologue ends with this passage:      'And 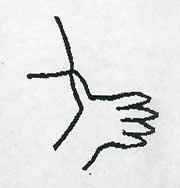 whowasit youwasit propped the pot in the yard and whatinthe nameofsen lukeareyou rubbinthe sideofthe flureofthe lobbywith. Shite! will you have a plateful? Tak.' Later in the same work we find Joyce's verbal version of his own thumb-nosing drawing that we have reproduced at the left: '...kissists my exits'. (Source)
Waldo Frank who lived in the same house as Joyce said Joyce's attitude to modern literature was "ironic." Joyce knew it was a fraud.

Needless to say, Joyce  was not the first writer to have perverse sexual appetites, but his "modernity" partly lies in his use of the novel to seek public acceptance of his own perversions. More remarkably still, the literary world, and eventually the wider society, gave him the validation he sought. 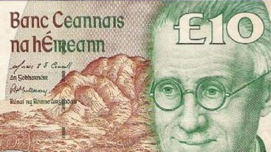 His face has featured on Irish banknotes; he has a small Dublin street named after him, and there are countless seminars devoted to his books held throughout the world. Not bad for a  writer Virginia Woolf  once likened to "a queasy undergraduate squeezing his pimples."
NARCISSISM A FORM OF SATANISM
Both Joyce and Lawrence exemplified a very modern form of inverted narcissism. Whereas in the past, the narcissist pretended to be purer than he was, the modern advertises his sickness as a badge of honour:  'Yes I'm turned on by pooh, what's your problem with that exactly? Get used to it! It makes me a dark and interesting sexual subversive, give me my literary prize now!'
Lawrence denounced the old "hypocritical" morality, which he claimed forced people to secretly masturbate instead of openly fornicating. Ironically his most famous book, Lady Chatterley's Lover, was itself prime masturbatory fodder. It's safe to say that many of those who formed a long line in central London to buy the book on the day it was legalized in the early 1960s were not doing so simply to seek greater understanding of  Lawrence's philosophy of romantic vitalism. 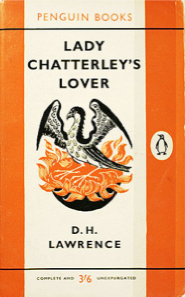 Philip Larkin's famous line: "Sexual intercourse began in Nineteen Sixty Three (which was rather late for me) - between the end of the Chatterley ban and the Beatle's first LP", though clever, is almost an inversion of the truth: obviously sexual intercourse had always existed -  what "began" in 1963 after the lifting of the Chatterley ban, was a new culture of mass media induced auto-eroticism - the very thing Lawrence claimed to despise.
Since Joyce and Lawrence's day, the cultural vocabulary has radically changed to reflect the Luciferian rebellion they pioneered. Terms like "transgressive" and "subversive" are now the highest commendations. The critical establishment now demands that artists continually "push boundaries", thereby institutionalizing a form of permanent cultural revolution . The most genuinely anti-establishment thing a writer can do these days is write a book devoid of graphic sexual or scatological content.
CULTURE OF A SATANIC CULT
The cultural revolutionaries have not restricted their onslaught to literature of course. Comedians like Amy Schumer and Sarah Silverman, both Jewish, dwell on excretory bodily functions and masturbation and respectable audiences laugh uproariously. In modern society expressing shock is considered much more shocking than purveying it. The window of acceptable discourse has widened to encompass the most extreme forms of Reichian subversion.
An obsession with human excrement is one of the hallmarks of Satanism, so it may be no coincidence that as scatology, and even coprophilia, have been mainstreamed in sitcoms and popular culture generally. Overt satanic references have become much more widespread in the same programmes and movies. The notorious American sitcom Two And A Half Men dwelt on scatological and satanic themes are featured quite regularly in episodes of this deeply malevolent Jewish-produced show.
CONCLUSION
Although still exalted in literary circles, Joyce is not, even as writers go, a major figure in popular culture - his books are too labyrinthine and obscure for that. Nevertheless he did his bit to alter the moral climate for the worse, by presenting the seedy pervert as literary martyr.

(D.H. Lawrence who stood up for gender differences has many redeeming qualities. His criticism of Joyce is another.)
The same syndrome of the pornographer as hero of the cultural revolution pervades western society generally . The corporate media regularly retail stories of how previously benighted generations objected to the daring obscenity of Lenny Bruce or Henry Miller, or in more recent times, Madonna's 1980s act. The moral of these stories is always the same:  If you condemn today's "boundary pushing" by Miley, Lady GaGa, or whoever, you too will end up a retrospective laughing stock like those chumps who condemned Lenny Bruce and James Joyce.
All of which goes to prove that, for the time being at least, the pornographers have won the culture war, and they get to write the history books.

Thanks you, Jude Duffy, for this excellent article. One is left wondering what can be done to remove this disgusting obsession from our lives. We have elevated the foul and debased the beautiful. Those who dish this up seem a form of demonry and we call them literary giants. Ever try to read Finnegans Wake? A thick book in more ways than one and surely literary sadism. Torturous, as the reader is trapped in a mind-set both confused and pompous. I could not get past 25 pages.

My one point of disagreement on your article is with Henry Miller. I've read him extensively and never found him to be pornographic but rather gritty, salt of the earth. Maybe he over-stepped a few times, but not in very disgusting ways and he always returned to seeking out the best in humanity, easily seeing the unique gifts in the humblest (or oddest) of human beings. He gave me so very much in terms of viewing the world as a palette that works best when the colors and themes are realistic yet adventuresome. Anyway, thank you for bringing to light what must be exposed for to expose is likely the only way to halt this demise. Poop stinks, is ugly and dangerously poisonous. Flush it and forget it.

Interesting. When I was a teen age kid some of these titles were being noised around. I remember struggling through "Cannery Row" (forget who wrote it). It was a struggle because it was boring and obviously intentionally depressing crap as a story. (There may be a pun or two there that fit your article.)

Pleasure reading was classic tales of Dickens or novels such as "Captain From Castile" or even "Treasure Island." A story, a romance, a moral, some lessons on life, something to exercise, sometimes challenge, the intellect.