Benjamin Freedman: Americans Haven't Been Free for a Long Time

Left, Benjamin H. Freedman, 82, center, receiving an award in 1972.
They own the currency; they own the media; they own the politicians. This is an example of how they start and end wars.
In WW1, Germany offered England a generous peace deal. But the Zionists sabotaged it by offering to bring the US into the war in exchange for England establishing Palestine as the "Jewish homeland." Then, they hired Hitler to exploit German resentment against Jews, forcing them to go to Israel, future capital of the Zionist NWO.
Benjamin Freedman was there: "President Woodrow Wilson was just as incompetent ...as a newborn baby."

(Now they're setting the US up for WW3 against Russia, China and Iran)
In 1964, Jewish insider Benjamin Freedman (1890-1984) revealed that the US has been a pawn in the Zionist Conspiracy for world domination (i.e. world government.) His speech was given before a patriotic audience in 1961 at the Willard Hotel in Washington, D.C., on behalf of Conde McGinley's patriotic newspaper, Common Sense. Here are a few cogent short excerpts.
"Here in the United States, the Zionists and their co-religionists have complete control of our government. For many reasons, too many and too complex to go into here at this time, the Zionists and their co- religionists rule these United States as though they were the absolute monarchs of this country. Now you may say that is a very broad statement, but let me show you what happened while we were all asleep...... 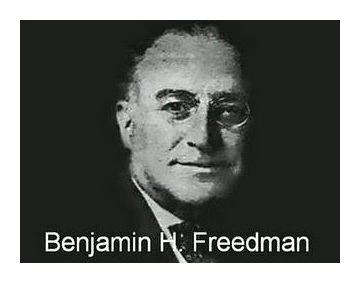 When [England was losing WW1], the Zionists in Germany...went to the British War Cabinet and ...said: "Look here. You can yet win this war. You don't have to give up. You don't have to accept the negotiated peace offered to you now by Germany. You can win this war if the United States will come in as your ally."
The United States was not in the war at that time. We were fresh; we were young; we were rich; we were powerful. They told England: "We will guarantee to bring the United States into the war as your ally, to fight with you on your side, if you will promise us Palestine after you win the war."
In other words, they made this deal: "We will get the United States into this war as your ally. The price you must pay is Palestine after you have won the war and defeated Germany, Austria-Hungary, and Turkey."
Now England had as much right to promise Palestine to anybody, as the United States would have to promise Japan to Ireland for any reason whatsoever.
It's absolutely absurd that Great Britain, that never had any connection or any interest or any right in what is known as Palestine should offer it as coin of the realm to pay the Zionists for bringing the United States into the war.
However, they did make that promise, in October of 1916. And shortly after that -- I don't know how many here remember it - - the United States, which was almost totally pro-German, entered the war as Britain's ally.
STABBED GERMANY IN THE BACK
What do we face now? If we trigger a world war that may develop into a nuclear war, humanity is finished.
Why might such a war take place? It will take place as the curtain goes up on Act 3: Act 1 was World War I, Act 2 was World War II, Act 3 is going to be World War III.
The Jews of the world, the Zionists and their co-religionists everywhere, are determined that they are going to again use the United States to help them permanently retain Palestine as their foothold for their world government.
What are we going to do? The life you save may be your son's. Your boys may be on their way to that war tonight; and you don't know it any more than you knew that in 1916 in London the Zionists made a deal with the British War Cabinet to send your sons to war in Europe. 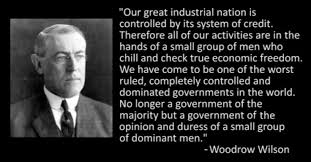 Did you know it at that time? Not a person in the United States knew it. You weren't permitted to know it. Who knew it? President Wilson knew it. Colonel House knew it. Other insiders knew it.
Did I know it? I had a pretty good idea of what was going on: I was liaison to Henry Morgenthau, Sr., in the 1912 campaign when President Wilson was elected, and there was talk around the office there.
I was "confidential man" to Henry Morgenthau, Sr., who was chairman of the finance committee, and I was liaison between him and Rollo Wells, the treasurer. So I sat in these meetings with President Wilson at the head of the table, and all the others, and I heard them drum into President Wilson's brain the graduated income tax and what has become the Federal Reserve, and I heard them indoctrinate him with the Zionist movement.
Justice Brandeis and President Wilson were just as close as the two fingers on this hand. President Woodrow Wilson was just as incompetent when it came to determining what was going on as a newborn baby. That is how they got us into World War I, while we all slept.
They sent our boys over there to be slaughtered. For what? So the Jews can have Palestine as their "commonwealth." They've fooled you so much that you don't know whether you're coming or going.
------
Related-  Audio of this 45-min speech
Jewish Defector Warns America
Other Righteous Jews, Myron Fagan
and  Henry Klein
First Comment by WB:
How the Christian churches and Christian people have been duped. Jesus called us sheep for a reason. Sheep are one of the dumbest animals there are.
The infiltration, and take over, of "Christian Zionism" in Christian churches in the USA is appalling and represents close to 100% of our churches in this nation.  The reason why I say 100% is because the churches that do not openly and actively support the number one enemy of Jesus Christ in the world today...namely the State of Israel, orthodox Jews and Rabbis...just say nothing, keep quiet, and go along. The very thought of telling the truth about Israel and orthodox Jews strikes more fear in the hearts of Christian pastors than does the IRS. Telling the truth simply is not done.
This makes nearly 100% of the churches in the USA complicit in the murder and maiming of millions of people. Not to mention complicit in ushering in the new world order, and the mark of the beast.
Will they ever wake up? No...they are too far gone and very much to afraid of the Jews and being labeled antisemitic... which is almost funny when we realize that the Jews that run Israel are not Semitic, not descendants of Abraham at all.

Comments for "Benjamin Freedman: Americans Haven't Been Free for a Long Time "

Henry, your reader WB has a head on his/her shoulders when stating nearly 100% of the churches in the USA are complicit in the murder and maiming of millions.

Jesus lambasted the Pharisees and Sadducees throughout the Gospels yet this is never taught in Christian churches. Matthew 23, for example, is a treasure trove of one-liners:

â€œWoe to you, teachers of the law and Pharisees, you hypocrites! You travel over land and sea to win a single convert, and when you have succeeded, you make them twice as much a child of hell as you are."

â€œWoe to you, teachers of the law and Pharisees, you hypocrites! You are like whitewashed tombs, which look beautiful on the outside but on the inside are full of the bones of the dead and everything unclean."

Nobody ever let them have it like He did. This is a major reason why I'm such a huge fan of His.

It's too bad Christians ignored Him when He said, "be ye therefore wise as serpents."

Now I know why I donâ€™t believe half the damned bully
talk that is supposed to represent the Christian church
sermons, which are nothing more than politically-
correct jibber jabber to keep us folks in the dark so the
gangsters out there can complete the takeover of the
world and kill off those they donâ€™t want around.

The history books are a damn joke. I do remember
reading about the German offer for peace, but the
real reasons were simply ignored and the rejection
papered over to keep us dumb and politically
obedient. Always blame somebody else for the
crimes committed.

Henry, I believe the woman in that photo closest to Ben Freedman may be Lyril Van Hyning, who for years published "Woman's Voice," similar to McGinley's "Common Sense."

Her last few editions of that periodical I set up, typing out her last articles and burning them to plates, then printing them on an AB Dick offset in my bedroom in San Bernardino, Cal. Elizabeth Dilling was already dead but Mady and those two ladies had been close friends. Van Hyning was then living in Arizona and stayed with Mady each time an issue was being made. Similar to most such periodicals, it was dying and Van Hyning was close to broke.