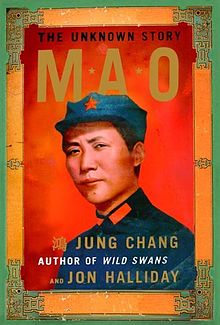 "People like me have a duty to ourselves; we have no duty to other people." -Mao
Communism is a satanic ruse, a troubling thought
when we consider that it is indirectly sponsored
by the central banking cartel, the people creating
our currency and credit.
The Chinese Communist Party (CCP) was founded as an eastern branch of Soviet Communism, carrying out the imperialism of the Russian Red Army. The CCP constitution passed by the First Congress of the CCP was formulated by the Comintern.
Edgar Snow introduced Mao and Zhou En lai to American readers in 1937 in his book, Red Star Over China, shortly after the Chinese Red Army's rout by Chiang Kai-shek in 1934. "The political ideology, tactical line and theoretical leadership of the Chinese Communists have been under the close guidance, if not positive direction, of the Communist International, which during the last decade has become virtually a bureau of the Russian Communist Party. "
----
Mao: the Ugly Reality Behind an Icon
By Marjorie Kehe
(henrymakow.com)
It is hard to single out the most chilling aspect of Mao: The Unknown Story by Jung Chang and Jon Halliday (2005). To dive into this hefty biography of China's "great Helmsman" is to feel alternately shocked, angry, and, finally, just plain sick at heart.
The story of man's inhumanity to man is, of course, not new and much about Mao's life is already familiar to readers.
But the level of detail offered by this exhaustively researched book (the labor of more than a decade for novelist Jung Chang and her husband Jon Halliday) creates a compelling portrait of Mao that will still shock many, as will a handful of revelations.
The whole of the former chairman's life is covered in this book, beginning with his birth to a peasant family in 1893 (in hills so remote that when the Chinese emperor died in 1908, it took two years for news of his death to arrive there) up through his frustrated and self-pitying final days in 1976.
In between, the authors offer a thorough analysis of Mao's rise to power, his actual achievements (or lack thereof) as a military man, the relentlessness (and cruelty) with which he strove to push China to world domination, and the endless and ruthless scheming he resorted to in order to retain power.
Chang and Halliday are able to offer a remarkable level of detail throughout their narrative, due to the impressive breadth and depth of the primary sources they tapped. (A short list includes former US Presidents Gerald Ford and George H.W. Bush, present and former communist dignitaries and officials throughout the world, one of Mao's official photographers, one of his translators, one of his nurses, a woman who washed his underwear, and the Dalai Lama.) 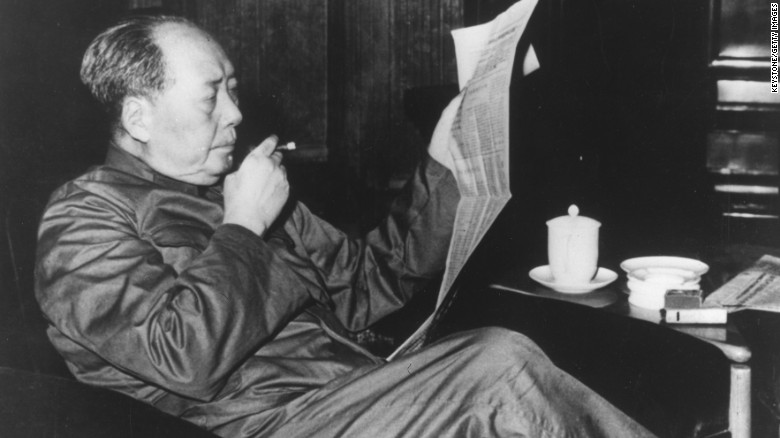 The result is a portrait that may rattle even those who long ago shed any vestige of reverence for Mao. This man who was a hero to many and a god to some comes across as lazy, callous, self-indulgent, clever rather than wise, and as careless of his own children as he was of the Chinese people.
Mao's seeming indifference to the suffering of others is perhaps the hardest aspect to grasp, although Chang and Halliday do a good job of offering a context for his lack of feeling.
Views he expressed at the age of 24, they say, "remained at the core of Mao's thinking throughout his life," and, even as a young man, Mao's egotism was shocking.
Was this because he was coddled by a gentle mother and then angered by the demands of his father? The authors don't try to blame Mao's crimes on his childhood.
But they do offer us his youthful words, statements like, "People like me have a duty to ourselves; we have no duty to other people."
Mao must have firmly believed this. There is little else that could explain his tranquility in the face of the suffering triggered by his policies. Jung and Halliday estimate that he caused the deaths of 70 million Chinese.
"There are 2.7 billion people in the world," he once calculated at a world summit with other Communist leaders. "One-third could be lost; or a little more, it could be half ... I say that, taking the extreme situation, half dies, half lives, but imperialism would be razed to the ground and the whole world would become socialist."
Yet despite his willingness to sacrifice others, Mao is not portrayed as a particularly devout believer. Chang and Halliday paint him as a pragmatist who simply found himself in the right place at the right time.
THE LONG MARCH
The biggest surprise in the book is probably its re-examination of Mao's role in the Long March. Chang and Halliday make a compelling case that Mao succeeded here through no heroism of his own but rather largely because Chiang Kai-Shek chose to allow the Red Army safe passage.
There is much that is painful to read in this book, but perhaps the harshest chapters are those that deal with the starvation of the Chinese people in the 1950s. Mao's determination to push his country toward industrialization (and to curry favor with other Socialist nations by offering generous food aid) came at a horrific price to his people.
Chinese government figures show that by 1960, the average Chinese was eating about 1,500 calories a day - a diet equivalent to that of slave-laborers at Auschwitz.
Yet while his people starved, Mao feasted on specialty foods, responding to stories of peasant suffering with statements like: "Having only tree leaves to eat? So be it." and " 'Oh, peasants' lives are so hard' - the end of the world! I have never thought so."
Compelling as its narrative is, this book has its flaws. For one thing, the repulsion its authors feel for Mao is too clearly on display, evident in tone and occasional descriptors like "the beady Mao."
Unsourced statements sometimes seem dubious, including claims like, "There was not one school in the whole of China where atrocities did not occur." It's hard to accept unattributed absolutes about a country so vast.
And emotional states are sometimes presented as givens. "The plain fact was that Mao could not stand his wife," they write of Jiang Qing, Mao's wife, the infamous Mme. Mao, but then offer nothing more than speculation as to the state of Mao's feelings.
But such shortcomings don't change the fact that this is an extremely compelling read even for those only casually interested in Mao - and a necessity for anyone hungry for more.
----
Because of de facto Communism, most other reviews have been negative.

Henry, like Mao and his spouse Madame Mao "the white-boned demon", we see the pattern repeated in marriages like Bibi & Sara Netanyahu, Bill & Hillary Clinton, sociopathic personality types who find each other to form "power couples" that commit mayhem and murder on a vast scale. Even though the Clintons' and Netanyahus' body counts are degrees smaller than Mao's, the impulse is the same. Evil gravitates to evil.

It is thoughtful of you to contextualize Mao's governance and legacy.

As a China scholar who grew up in Communist-ruled eastern Europe, I must caution you, though, about Jung Chang's credibility. (The standardized spelling should be Zhang Rong btw, but that is her choice.)

Where do I begin?... Just a few years ago, the crushing majority of China's citizens did not possess a passport. In fact, moving to a nearby big city required a notoriously difficult-to-obtain permit. So the fact alone that in 1978, with the Cultural Revolution barely over, Ms. Chang got on a plane and headed to London to further her studies speaks volumes about how cushy and well-connected her family's life in China really was.

Her own bio on Wikipedia admits as much, saying something about her being both victimized and privileged. What an utterly ludicrous statement. Trust me, that is not how Communist governments work. They don't brand you an enemy and single you out for punishment and humiliation so that the next minute they can award you a scholarship and fly you out to the UK.

I can well imagine that Chang's stories - life as well as literary -- are a case of "there's demand; why not create the supply". Victimhood is a great source of identity, even celebrity. And the West has always been fond of its own sense of superiority. I'm sure that once she landed in London, Chang was quick to realize that local scholars only wanted to hear gory tales of life under Chairman Mao -- not "I grew up well off and when my father died he was given a state funeral".

Anyhow. This is really just one of the countless stumbling blocks that Chinese Studies have been fraught with for the past 150 years: We have missionaries 'Christianizing' the field with their own if not agenda then certainly vocabulary and imagery. We have philosophers writing seminal textbooks on literature. And yes, we very clearly have [US and UK-based] products of extraordinary privilege (military princelings, cadres' children etc etc) peddling their tales of hardship, because... well, that's what the western audience wants to hear.

As the ancient Romans used to say, the world wants to be deceived.