Protocols 5-11- The Slaughter of the Lambs 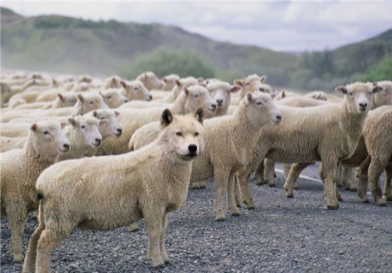 "The goyim are a flock of sheep, and we are their wolves. And you know what happens when the wolves get hold of the flock?"
Tyranny in Place.
The evidence is everywhere.
Globalism is their "Super State."
But it is forbidden to mention the Protocols
in polite company.
This is Part Two in a Synopsis of The Protocols of the Elders of Zion. Introduction and Part One are here.  This is required reading for anyone who wishes to understand the world in which we live. The Protocols exhibit a pathological hatred for non-Jews, and a desire to undermine and exploit them. The Protocols, which dates from 1903, were part of an "initiation" for 33 degree Masonic Jews. Most Jews are unaware of this agenda and therefore are easily manipulated. "Anti-Semitism is indispensable to us in the management of our lesser brethren." (Protocol 9)
Protocols Five  - Stranglehold on personal freedom as in Communist states
The author states that despotism is necessary for the world he is creating, one "where the feelings toward faith and community are obliterated by cosmopolitan convictions."
The following is the rationale behind communism and the war on terror. "We shall create an intensified centralization of government in order to grip in our hands all the forces of the community. We shall regulate mechanically all the actions of the political life of our subjects with new laws. These laws will withdraw one-by-one all the indulgences and liberties which have been permitted by the goyim, and our kingdom will be distinguished by a despotism of such magnificent proportions as to be at any moment and in every place in a position to wipe out any goyim who oppose us by word or deed." 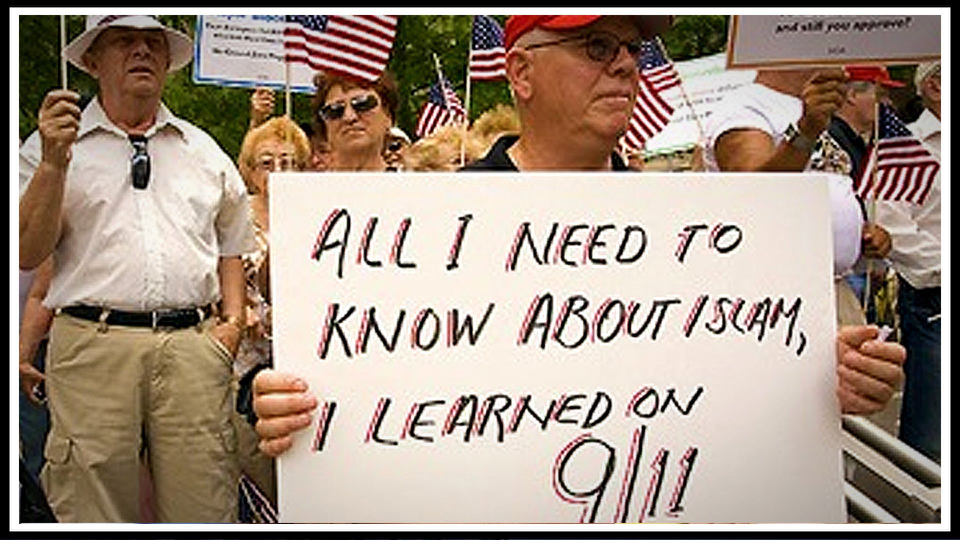 The union of the goyim might have thwarted the Illuminati but "We have set one against another the personal and national reckonings of the goyim, religious and race hatreds, which we have fostered into a huge growth in the course of the past twenty centuries.... We are too strong. There is no evading our power. The nations cannot come to even an inconsiderable private agreement without our secretly having a hand in it."
"It is through me that nations reign. And it was said by the prophets that we were chosen by God Himself to rule over the whole earth... The wheels of the machinery of all States are moved by the force of the engine which is in our hands, and that engine is ...Gold. ...Capital ..must be free to establish a monopoly of industry and trade: this is already being put in execution by an unseen hand in all quarters of the world."
"The principal object of our directorate is... to debase the public mind... lead it away from serious reflection calculated to arouse resistance; to distract the forces of the mind towards a sham fight of empty eloquence." "We shall assume the liberal physiognomy of all parties, of all directions, and we shall give that physiognomy a voice in orators who will speak so much they will exhaust the patience of their hearers..." 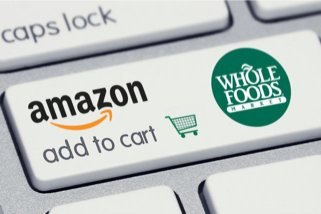 Protocols 6 -- We love the proletariat so much we want all the goyim to join them.
We are creating "huge monopolies" upon which even the large fortunes of the goyim are dependent so that "they will go to the bottom together with the credit of the states on the day after the political smash..."
"In every possible way we must develop the significance of our Super Government by representing it as the Protector and Benefactor of all those who voluntarily submit to us." "We want industry to drain off from the land both labour and capital and by means of speculation transfer into our hands all of the money of the world, and thereby throw all the goyim into the ranks of the proletariat. Then the goyim will bow down before us, if for no other reason but to get the right to exist."
Communism. "In order that the true meaning of things may not strike the goyim before the proper time, we shall mask it under an alleged ardent desire to serve the working classes..."

Protocol 7 -- "We control the press" (and this was 115 years ago or more)
"The increase in police forces [is] essential... besides ourselves there should only be "the masses of the proletariat, a few millionaires devoted to our interests, police and soldiers..."
"We must compel the government of the goyim" to fall in with our plan "already approaching desired consummation" by requiring them to obey "public opinion" which we control through that great power already in our hands, the Press.
"In a word, to sum up our system of keeping the government of the goyim in Europe in check, we shall show our strength to one of them by terrorist attempts and to all, if we allow the possibility of a general rising against us, we shall respond with the guns of America or China or Japan." 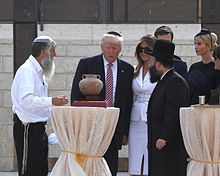 Protocol 8 -- Use blackmailed frontmen.
"For a time until there will no longer be a risk of entrusting responsible posts in our States to our brother-Jews, we shall put them in the hands of persons whose past and reputation are such that... if they disobey our instructions, must face criminal charges or disappear--this in order to make them defend our interests to their last gasp."
Protocol 9 --
"De facto we have already wiped out every kind of rule except our own... Nowadays if any States raise a protest against us it is only pro forma at our discretion, and by our direction, for their anti-Semitism is indispensable to us in the management of our lesser brethren."
"It is from us that the all-engulfing terror proceeds. We have in our service people of all opinions, of all doctrines, restoring monarchists, demagogues, socialists, communists and Utopian dreamers of all kinds. Each one of them is boring away at the last remnants of authority, is striving to overthrow the all established forms of order... we will not give them peace until [all states] openly acknowledge our international Super-Government, and with submissiveness."

"In order to carry on a contested [political] struggle, one must have money, and all the money is in our hands." We have taken control of the "institutions of the goyim" using the "chaotic licence of liberalism. We have got our hands into the administration of the law, into the conduct of elections, into the press, into the liberty of the person, but principally into education and training as being the corner-stones of a free existence."
"We have fooled, bemused and corrupted the youth of the goyim by rearing them in principles and theories which are known to us to be false although it is by us that they have been inculcated."
Protocol 10 -- "Destroy the family." "Exhaust humanity with discord and corruption."
"How indeed are the goyim to perceive the underlying meaning of things when their representatives give the best of their energies to enjoying themselves?"
"By inculcating in all a sense of self importance, we shall destroy among the goyim the importance of the family and its educational value and remove the possibility of individual minds splitting off, for the mob, handled by us, will not let them come to the front nor even give them a hearing; it is accustomed to listen to us only who pay it for obedience and attention. 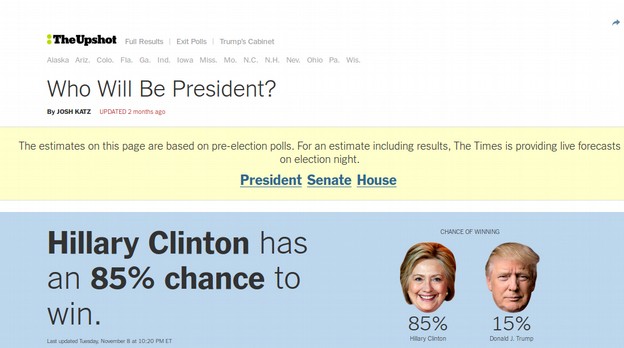 "In this way, we shall create a blind mighty force which will never be in a position to move in any direction without the guidance of our agents... The people will submit to this regime because it will know that upon these leaders will depend its earnings, gratification and the receipt of all kinds of benefits."
"When we introduced into the State organism the poison of Liberalism its whole political complexion underwent a change. States have been seized with a mortal illness--blood poisoning. All that remains is to await the end of their death agony. Liberalism produced Constitutional States which took the place of what was the only safeguard of the goyim, namely Despotism....
Then it was that the era of republics became a possibility that could be realized; and then it was that we replaced the ruler by a caricature of a government--by a president, taken from the mob, from the midst of our puppet creatures, our slaves. This is the foundation of the mine we have laid under the goy peoples." 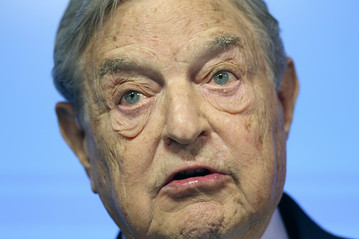 (Elder of Zion, George Soros)
"The recognition of our despot ...will come when the peoples, utterly wearied by the irregularities and incompetence --a matter which we shall arrange for--of their rulers will clamour, "Away with them and give us one king over all the earth who will unite us and annihilate the causes of discords--frontiers, nationalities, religions, State debts--who will give us peace and quiet which we cannot find under our rulers and representatives."
Thus we must utterly "exhaust humanity with dissension, hatred, struggle, envy and even to use torture, starvation, the inoculation of disease and want, so that the goyim see no other course open to them than to take refuge in our complete sovereignty in money and in all else. But if we give the nations of the world a breathing space the moment we long for is hardly likely ever to arrive." 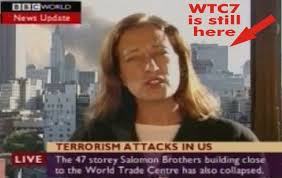 Protocol 11 -- Freemasonry an instrument of Jewish domination.
"By these combinations, I mean the freedom of the Press, the right of association, freedom of science, the voting principle, and many another that must disappear forever from the memory of man..." "The goyim are a flock of sheep, and we are their wolves. And you know what happens when the wolves get hold of the flock?"
"...we shall keep promising them to give back all the liberties we have taken away as soon as we have quelled the enemies of peace and tamed all parties... It is not worth while discussing how long they will be kept waiting for the return of their liberties..." This program is designed to gain for the Jews in an indirect way what isn't possible otherwise. This has been the basis of our organization of "secret Masonry" a motive unsuspected by the "goy cattle" attracted to the lodges. "God has granted to us, His Chosen People, the gift of the dispersion,' which has "now brought us to the threshold of sovereignty over all the world."
---
Related - Globalism is Communism   by Jon Rappoport

Comments for "Protocols 5-11- The Slaughter of the Lambs"

When this wonderful synopsis is finished it would be a real service to mankind to put it all in an easy to duplicate (with your site embedded) form for anyone wishing to spread it on the net. Not just by Internet but also in an easily printed out form for local distribution by those who frequent your site.

I also wish that you could sell it in pamphlet form but doubt if that would be possible in today's Canada or U.S. or any other English speaking nation. Much more likely to be allowed unmolested in other languages.

I write this because it has been my experience that the bulk of today's people (of those who call themselves "Christians," anyway) will not study the actual protocols, will not even read them once introduced, partly because they require thought which most well meaning people find repulsive if not impossible to digest and partly because most today are so dumbed down that the concentrated plot is beyond their ability to fully absorb by a simple reading without time for much reflexion. Time they will not devote to it as it truly interferes with their lives, especially their ingrained thought patterns.