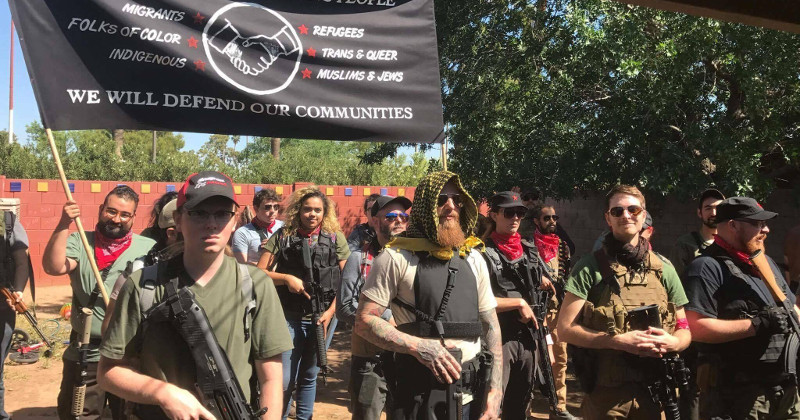 (Armed Antifa Communists at Trump rally in Phoenix Tuesday)
For all their anti capitalist rhetoric, Antifa demonstrates many signs of being sponsored by the (((corporations))) they pretend to oppose. They are the paid street thugs of the liberal establishment.
by Jude Duffy
(henrymakow.com)
I came across a critic of Antifa on the internet today who accused the group of seeking to destroy capitalism. Really?
That's what they say themselves of course, but what Antifa say and what they do are two different things.
If Antifa were out to wreck capitalism, why do they target the tiny and inconsequential Alt-Right and "Alt-Lite" movements, and not Big Tech, Big Pharma, Big Media, and most of all Big Banking?
Why, furthermore, does Big Business, in the shape of Big Tech, Big Banking and Big Media aid and abet Antifa by choking their Alt Right and Paleo-conservative enemies' ability to reach the public, or even to conduct business?
For all Antifa's histrionic revolutionary patter, big transnationals and big banking seem remarkably unfazed by the movement.
Antifa, it's true,  claim to be anti-war and to oppose Israel, but their actions, or rather inactions, tell a very different story - especially if one believes, as they say they do, that direct action, not policy manifestoes, define a political movement.
Why, if Antifas oppose war, do they violently disrupt the rallies of anti-war groups like the Alt-Right and Alt-Lite, but never those of Neocon warmongering politicans such as the Bush clan, Mitt Romney, and Lindsey Graham, much less those of Democrat war-mongers, Hillary Clinton and Barack Obama? 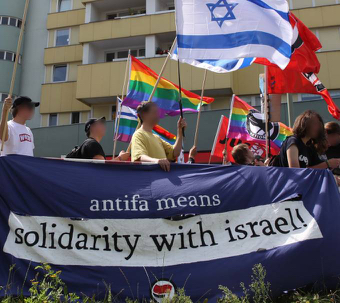 Compared to the power and influence these politicians wield, the Alt Right is a piffling non-movement, with no money, no corporate backers and no mainstream media presence. Yet the supposedly radical Antifas devote most of their energy to violently harassing this tiny group, while studiously ignoring the big sharks of AIPAC and the Greater Israel movement.
If, as they also insist, "inaction is consent", they clearly consent to the permanent war agenda, regardless of their tokenistic Marxist gibberish to the contrary.
Antifa's refusal to meaningfully oppose the Neocon warmongers also proves just how phoney their anti-racism is. All the lynchings in the South put together make for a tiny  fraction of the non-white deaths caused by the wars of the Clintons, Obama, Blair and Bush.
Antifa stokes up deadly violence when police kill black Americans - regardless of the circumstances - but couldn't care less about the endless mass slaughter inflicted on non-whites by western invasions, not to mention the bombing campaigns, terrorist attacks, and death dealing sanctions western left liberal leaders mete out to non-white countries.
And that's not counting the many black (and white and Hispanic) Americans killed or maimed because of the Big Lie of WMD - a lie promoted by Hillary and Antifa's allies in the New York Times, the BBC and CNN.
Antifa also never meaningfully push back against the support left liberals like Obama, Sanders and Hillary give to the openly racist state of Israel.
Nor, for all their alleged concern for "wimmin's freedoms", do they oppose Obama and Hillary for giving billions worth of arms to the ultra-misogynist and Isis supporting Saudi state.
DOG THAT WON'T BARK
Antifas of course don't usually explicitly condone western aggression against the third world  - they dare not because they know that to do so would expose their true nature to genuine pacifist anti-imperialists who harbour romantic illusions of the Antifas as noble anti-Nazi street warriors. Nevertheless Antifa's refusal to engage in direct action against the forces that promote these wars is Sherlock Holmes' dog that doesn't bark. Coupled with their violent hostility to conservative and alt-right anti-war and free speech groups, it proves beyond doubt that at the very least they are de facto agents of the military industrial complex. 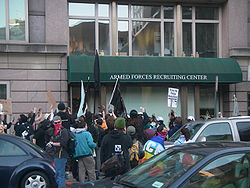 Often indeed Antifa's role as psy-op merchants is too obvious to be plausibly denied. At a protest against the G8 summit in London in 2009, several masked Black Bloc Antifa activists smashed windows of the Royal Bank of Scotland, while police officers stood watching them, and made no attempt to stop, much less arrest them. Even some in the corporate media felt compelled to express bemusement at this weird pseudo-anarchist street theatre.
THE AGENDA
The motive for all of this infiltration is clear: Discredit anti-war and anti-globalist movements by associating them with violence, and thus give western Zionist controlled governments the pretext to suppress all right to protest and to free expression. Even someone as mainstream as Jonathan Porritt, the leader of British environmental group Friends of the Earth, has acknowledged the Deep State provenance of Black Bloc.
After Black Bloc caused several violent affrays at anti-globalist and anti-war protests in Britain in the early 2000s, the British police began to "kettle protesters", i.e. bottle them up in one location for most of the day and prevent them from leaving the area. 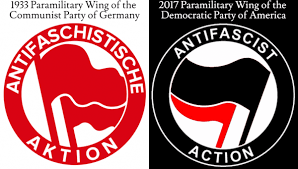 Who wants to go on a protest when you can't leave it for many hours - even for a toilet break or to buy a snack? Unsurprisingly numbers at anti-globalist events tanked after this. Presumably Lord Rothschild sent Antifa  leaders a congratulatory telegram for work well done.
So on the one hand Black Bloc Antifa seek to unman right-wing opponents of globalism and Zionism by macing them, bashing their heads in with nail filled sticks, and by hurling poop, acid and piss in their faces. The corporate media and Neocon politicians then finish the job by blaming the victims for the crime and by painting the Antifa as noble warriors against resurgent Nazism.
On the other hand the Antifa infiltrate genuine environmentalist, anti-war and anti-globalist activism with a view to disabling left-wing oppostion to Zio-globalism.
With both wings of dissent thus hobbled, the globalists are free to proceed with their agenda of total surveillance and total obeissance to Big Trans.
-----
First Comment by Tom:

the world the greatest terror regime of all time resulting eventually in the killing of over 100 million innocent people world wide.

It will be interesting to see how many left-leaning, feel-good dupes they bring under the hammer and sickle to protest Trump.

[the hammer and sickle is seen at 0.04-5 seconds, but purchased media - cnn, abc don't show that flag in their newscasts showing the same scene,

and when you do a google search for Charlottesville videos all the videos on page 1 are cnn, abc etc.]

The threat to the USA is not a Nazi-style revival, rather the greater threat is an implementation of the thought police of the Bolsheviks.

Everyone needs to remember, Trotsky and Lenin were financed by Jacob Schiff and the Warburgs, and today's alt-left communists are financed by Soros,

all from the same House of Rothschild money fountain.

All sides are being armed by the â€˜quiet eliteâ€™ who own US and EU Deep States. Looks like a real shooting CIVIL WAR is being planned both in America and in EU.

"French police discovered a cache of weapons over the weekend, including a bazooka, in the no-go Paris suburb of Seine-Saint-Denis only a day after young men had robbed officers of their weapons in the same suburb.

The police say they found an American-made anti-tank bazooka along with several other weapons, a large quantity drugs, and police equipment in a bike shed in the troubled suburb. The raid is likely connected to organised crime in the area as the information leading to the operation came from the Central Organisation for the Fight Against Organised Crime (OCLCO), Lâ€™Express reports.

Police were able to track down two men, one of which admitted to owning the weapons. Police say in addition to the anti-tank weapon, they seized high power explosives, 12-gauge shells and 9mm ammunition, two sawn-off shotguns, and police equipment which authorities believe would be used to sow confusion or allow suspects to escape police detection.

A local police officer said he believed the bazooka was likely to be used in an attack against an armoured car. â€œItâ€™s a good thing that we managed to intercept them before they sold this weapon,â€ the officer said."

When I think of them and their violent leftist tactics,I'm like,This sounds Familiar,then oh yeah there's another group that used similar tactics.Then it hit me,this is lot of what"The Weather Underground" did in the 60's-70's.Btw isn't one of Obama's best Friends Weather Underground Co-Founder Bill Ayers.

To me it's plain and simple, Anti-fa members are what Lenin called "useful idiots" nothing more and nothing less ... and the elite that control our world will get rid of them once there finished using them just like Lenin and Stalin did in the purges of loyal party members in the Soviet Union.