Was Nagasaki Payback for Expelling Freemasons? 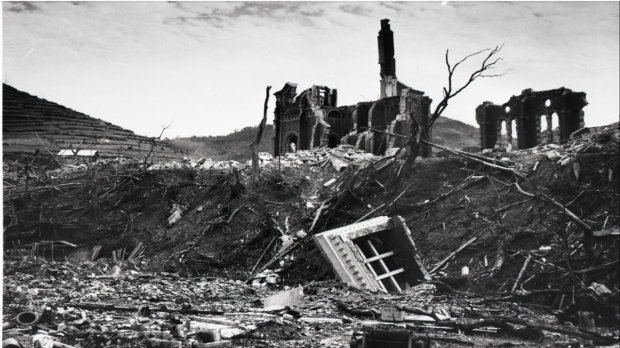 The "Fat Man" bomb from Bock's Car detonated directly over Urakami Cathedral, the largest cathedral in the entire Orient. This was all that was left.
On this day in 1945, Nagasaki, home to 50,000 Christians, was bombed.
Of Nagasaki's 250,000 residents, 73,844 were killed, 74,909 injured, and more than 120,000 suffered radiation effects.
We shouldn't overlook that Nagasaki expelled the Freemasons in 1926.
By the 1930s Japan banned them entirely. Did this add "payback" to the Nagasaki bomb?
Atomic Bomb Secrets by David Dionisi reviewed by James Perloff
by James Perloff
(abridged by henrymakow.com)
The dropping of atomic bombs on Japan in 1945 was completely unnecessary; Japan had, in fact, already offered to surrender on virtually the same terms the U.S. approved at war's end. 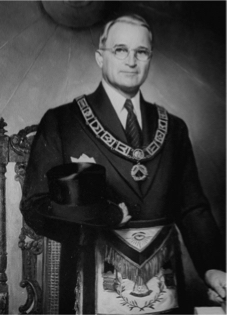 Why did Truman's controllers order Japan's nuclear bombing? As I have grown increasingly aware of the ruthless Talmudic psychopathology of the Powers that Be, I cynically confided to friends, "I think they enjoyed it." But after discovering David Dionisi's Atomic Bomb Secrets, we can be much more specific. This well-written, 217-page gem, documented with 496 end-notes, blows the lid off the sordid episode.
After Christianity first reached Japan in the 16th century, it faced growing pains, including times of severe persecution, but gradually became established, centered in Nagasaki, which became nicknamed the "Japanese Vatican." In 1945, some 50,000 Nagasaki residents were Christians.
After the Enola Gay dropped the "Little Boy" bomb on Hiroshima on August 6, the plane named Bock's Car (also written bockscar) carried the "Fat Man" bomb to Nagasaki on August 9. Most of the 12-man crew believed their objective was Kokura, and a secondary target was only to be selected if weather interfered. Dionisi does much to debunk the "poor visibility" claim long used to justify the plane's rerouting to Nagasaki. 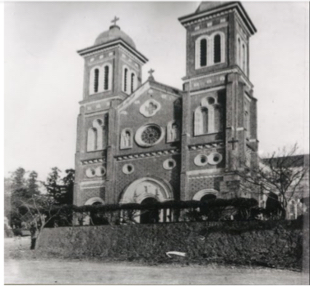 The "Fat Man" bomb from Bock's Car detonated directly over Urakami Cathedral, left, the largest cathedral in the entire Orient. At Nagasaki (250,000 residents), 73,844 were killed, 74,909 injured, and more than 120,000 suffered radiation effects.
Truman and other U.S. officials later claimed there was a military target: the Mitsubishi shipyard. But Bock's Car flew three miles past the shipyard before dropping its payload. The cathedral was obliterated; the shipyard left virtually unscathed. Its famous hammerhead crane, built in 1909, still stands today.
We shouldn't overlook that Nagasaki expelled the Freemasons in 1926; by the 1930s Japan banned them entirely. Did this add "payback" to the Nagasaki bomb?
Dionisi insightfully notes: when Satanists conduct a human sacrifice, they believe they draw power from the victim's death. At Nagasaki, over 70,000 lives, many of them Christians, were incinerated on a satanic altar.
(The Nagasaki bombing's ritualism cogently reminds us that events like 9/11 are not necessarily purely geopolitical false flags, but often have spiritual dimensions as well. Is Nagasaki perhaps a clue as to why geo-engineered disasters keep striking America's Bible Belt, but not the "Establishment" Northeast? Dionisi has written a book on 9/11, The Occult Religion of the 9/11 Attackers, which I haven't read but have ordered.) 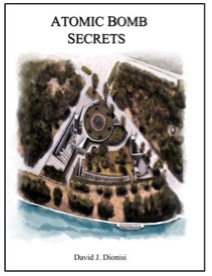 When people contemplate Japan's nuclear bombing, most think: "Hiroshima." Dionisi considers this a psychological ploy by the PTB (whom he calls "the Brotherhood of Death"). The first bombing would stand out in the public's mind, while the principal target (Christian Nagasaki) would get largely overlooked.
In another macabre deception, a Catholic priest and Protestant minister were persuaded to bless Bock's Car before it departed on its mission. Later, both men greatly regretted it.
OTHER FINDINGS
A ground-breaking detail I learned from Dionisi is the A-bomb's role in Korea's division into North and South. I've discussed the artificial justification for this division elsewhere, but Dionisi elaborates that Japanese scientists were developing their own atomic bomb. After initial research in Japan, the project was transferred to the Konan region of northern Korea (then a Japanese protectorate). This area was selected for multiple reasons: availability of uranium, the power the Chosin dams could generate, and (perhaps most importantly) keeping away from American bombers. 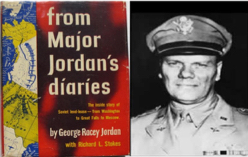 Giving the Soviet Union postwar control of North Korea (allegedly its reward for a mere five-days' participation in the Pacific War) now makes far more sense. Not only was the cabal handing Stalin the plans and materials for the atomic bomb (as documented in 1952 by Lend Lease expediter George Racey Jordan in his book From Major Jordan's Diaries), they were giving him Japan's installations for making one.
Another compelling fact I learned from Dionisi: the horrifically bloody battle of Okinawa (over 150,000 casualties) was completely unnecessary to win the war; it was fought to convince Americans that A-bombs were needed. Dionisi's book is packed with other information I'd never heard before about, e.g., Stalin, and Freemasonry. 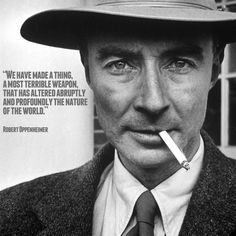 From his book you'll learn why Pyongyang became capital of communist North Korea, and why spying allegations were levelled against Dr. J. Robert Oppenheimer (the Manhattan Project's scientific leader.) Oppenheimer and others, quoting Dionisi: "were misled to believe that the atomic bombs would be detonated over military targets, thereby limiting civilian casualties. . . . Speaking to President Truman after Nagasaki had been destroyed, Oppenheimer told him, 'Mr. President, I feel I have blood on my hands.' The Brotherhood of Death hated Oppenheimer for later opposing the hydrogen bomb and destroyed his career by arranging for him to be accused of spying for the Soviet Union."
You'll also learn about the American POWs who died at Nagasaki. And be sure to read his end-notes. Unlike most end-notes, which are dull recitations of publisher names and dates, Dionisi's are loaded with collateral information; they constitute a "book within a book."
Atomic Bomb Secrets rates a spot on any truth-seeker's bookshelf. Thank you, David J. Dionisi.
--
Originally posted Sept 12, 2016

Comments for "Was Nagasaki Payback for Expelling Freemasons?"

Mister Makow, may be you already know what I am pointing out by this message, but in the case you don’t it could be revealing about the topic of the article mentioned above:

reversing the name of the bomber which dropped the first atomic bomb over Hiroshima, “ENOLA GAY”, you obtain a disconcertig battle cry: “YA(hweh) G(od) ALONE …

Could that be casual? Just with a probability over a few milions, I believe.

RE: Was Nagasaki payback for expelling Freemasons?

This article is quite interesting for its observations about this Oriental version of the bombing of Dresden and other cities in Europe.

However, I do not think that Fatman has anything to do with the Freemasons or Jesuits being expelled from Japan, although both organizations gave their blessings to the operation. I know that Oppenheimer was a Communist, like Alger Hiss –and Stalin.

I like Perloff's mention of Japanese scientists developing nuclear weapons in North Korea during WW II, and that comment about enriched uranium being delivered to USA by Hitler. This brings me to another point: the lawsuit against Oppenheimer, the Rosenberg affair and even Maccarthyism may have been used as a smokescreen for such facts, much like the so-called Holocaust being a smokescreen for the Zionists.

There is credible information that the US got it's uranium from the Nazi U-Boat 234, which was on it's way to Japan (with 2 Japanese officers) but went to the USA instead. Contents included enough uranium for Little Boy, enough to be enriched for Fat Boy, V2 and V2 with cockpits, and the all important infra red triggers for the nukes. The deal was Bormann et all, possibly Hitler, post Bunker, got to go on a holiday in Argentina (and keep the 4th Reich loot).

In any case it is by way of deception and the powers that be (even if they are naught boys and don't follow the Illuminati script properly at times) are thoroughly controlled, wittingly or not. The two Japanese officers committed suicide when they realized where they were at. Did they not realize that the Banksters who bankrolled the Japanese military machine would turn on them eventually? Ditto Fukushima. (see 82.221.129.208 Fukushima Sabotage report)

When will people understand that the Luciferian elite worship the spiritual principle of death and destruction?
Oppenheimer, an occultist and communist agent, knew exactly what he was talking about when he said: I am become Death, the destroyer of worlds. So, he knew his Baghavad-Gita hinduism well. Remember that Kabbalah is judaism+hinduism.

Also note that he said "I am become" and not "I have", showing his belief that he became a god (I am, a title of God Jehovah) as he practiced the negative spiritual principle of destruction.

Trumman, his boss, was a high ranking Mason, too. He was not "duped" at all.

My father and I had a few discussions about the atomic bombings. He was aboard ship as a marine PFC out past Midway Island when the the bomb was dropped on Hiroshima. His superiors told the marines that the bomb will save millions of lives in the expected invasion of Japan that he was purportedly on route to. He died believing this and would not accept that he had been lied to.

Many of those bloody island battles should have been avoided and were unnecessary. It was the cutting off of oil supplies that beat Japan. JFK took an active part in the war to cut off their supply routes. Japan was already defeated and it's people were starving before the bombings.

The British Bertrand Russell was the one that pulled Truman's strings to drop the bomb. It's true that they both were Masons, but his primary purpose was not one of revenge, it was to shock and traumatize the world into accepting a British Empire one-world government. This one-world government is nothing but Bush's New World Order, which in teetering on collapse.

Another good article but I think it should be noted that the bigger story that Dionisi does not mention is the expulsion of the Jesuits from Japan in 1639. The Jesuits have a long memory for payback as per their track record. As Saussy said they are the rulers of evil.

Oddly, America for all intensive purposes was on the side of Communism during WW1 and WW2.

It wasn't till the Korean and Vietnam wars that America opposed and fought against Communism.These wars were naturally not supported by the pro Marxist MSM in America especially Vietnam where they publicly humiliated the Vietnam Veterans for their personal revenge.

I don't know if Nagasaki was strategically chosen as a nuclear target because of expelling the Freemasons years prior or that the Cathedral was a specific target either. If so, it would fit the typical Marxist hate strategy of that time.

Truman was duped into believing that the dropping of those atomic bombs were in "defense of liberty" as he supposedly stated years later.

Ronald Reagan also was duped into believing that the end of the Cold War would be the end of Communism and not the first step towards the implementation of a One World Government run by Communists themselves.

But it rings true. Well, then Groves & Curtis le May must've been more than just doing their duty.

Even Robert McNamara wouldn't accept the blame for le May's excesses in Vietnam. He described le May as a cigar chomping guy who used 2 words, yup or nope.

& not to mention Southern Africa's very own Bomber Harris (RAF).

A SS guy explained to me how they had to shoot civilians during bombing raids in Hamburg because they could not stop the burning phosphorus on their bodies. So, as an act of mercy they shot them.