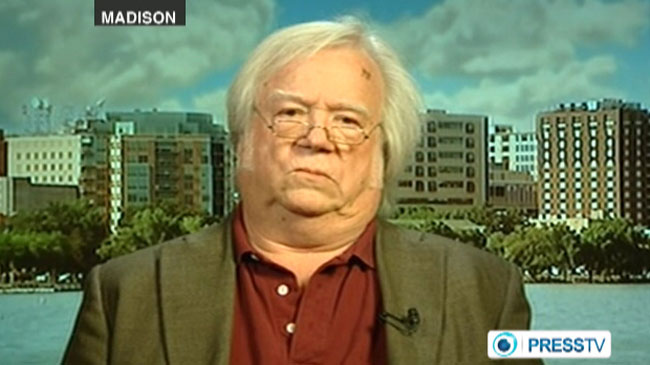 (left, Jim Fetzer)
You've got to give the Illuminati credit for continuing to drive home fake news like the Sandy Hook "shooting" five years ago.
That's why we owe Prof Jim Fetzer, 76, a vote of gratitude for continuing to challenge their lies.
To Fetzer's surprise, when CBS recently revisited this psy op, they did not remove his comments from their website.  He has reiterated his belief that Sandy Hook was a FEMA drill to ban guns and has demanded equal time to reply in full.
Additional proof that these mass casualty shootings were psy-ops is that there haven't been any since the election of Donald Trump.
CBS's 60 Minutes Sandy Hook Sob Story
by Jim Fetzer
(henrymakow.com)
On Sunday, 6 August 2017, "60 Minutes" rebroadcast a story from last year interviewing parents who claim to have lost children during the massacre at Sandy Hook Elementary School, which is alleged to have taken place on 14 December 2012 in the Sandy Hook subdivision of Newtown, Connecticut.
My surmise is that they ran the story again in response to the statistical analysis by Carl Herman, which shows that the improbability of having 20 Sandy Hook parents who gave birth at the average age of 36 was about 109.4 quadrillion to 1. Here's a video about Sandy Hook's elderly parents:
To my astonishment, CBS has not (as of now) taken down serious and substantial comments challenging the "60 Minutes" report about Sandy Hook, including Paul Preston's confirmation that it had been a drill, that no children had died and that it had been done to promote gun control.
Here's some of my comments on the "60 Minutes"web site:
They fabricated the kids out of photos of other children when they were younger. See "Sandy Hook Charade: 'Noah Pozner' was Michael Vabner as a Child", http://jamesfetzer.blogspot... An excellent study of the statistical impossibility that all 20 of the mothers' average age at childbirth was 36, which has an improbability of 109.4 quintillion to 1, has come from Carl Herman. Check it out at "The Millennium Report: New Angle on the Sandy Hook Shooting Hoax", http://themillenniumreport.... James Mattioli, by the way, attended his own funeral. Ask his dad for a birth certificate, an autopsy report or the death certificate for James. You won't get them.
--

Have you read the book? They fabricated the kids using photos of other children when they were six years old. Consider the case of Noah Pozner, a most interesting child, who not only died at Sandy Hook on 14 December 2012 but died again in Pakistan on 16 December 2014. His father, Lenny Pozner, sent Kelley Watt a death certificate for Noah that turned out to be a composite of the bottom half of a real death certificate with the top half of a fake. It's in the book. Obviously, if Noah had really died, Lenny would have had a real death certificate. We have shown that Noah was made up out of photos of his "older step brother" as a child. See "Sandy Hook Charade: 'Noah Pozner' was Michael Vabner as a Child".
--
I have now written to request "equal time" to respond, where I would judge the probability of a positive response  to be on the order of the probability of 20 Sandy Hook mothers having given birth at the average age of 36! The kids were fabrications from photos of children when they were 10 years younger. 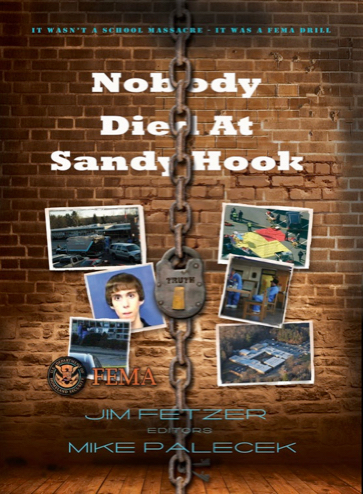 The book, NOBODY DIED AT SANDY HOOK (2015), includes contributions from 13 experts, including six current or retired Ph.D. professors. They discovered that the school had been closed by 2008 because it was loaded with asbestos and other bio-hazards and it would have been prohibitively expensive to upgrade to make it compliant with Americans with Disabilities Act requirements. One of the contributors, Paul Preston, explains that, as a school superintendent himself, what was being broadcast that day did not look right. He reached out to his contacts in the Obama Department of Education, all of whom confirmed that it had been a drill, that no students had died and that it had been done to promote gun control. It was a FEMA exercise, with a rehearsal on the 13th, going LIVE on the 14th. The FEMA manual is Appendix A in the book. Surely CBS can do better. The book can be downloaded for free as a pdf. If ordinary citizens can figure this out, why can't CBS? Why is CBS perpetuating this fraud on the public?
--
The proof that Sandy Hook was an elaborate deception upon the American people has become increasingly stronger as more and more research has been conducted. The banning of NOBODY DIED AT SANDY HOOK (2015), to which thirteen experts had contributed, including six current or retired Ph.D. professors, stunned the internet. Today YouTube has taken down hundreds of Sandy Hook videos and dedicated web sites in a desperate effort to keep the truth from citizens who were ripped off by the scam, donating between $28 and $130,000,000 split between twenty-six families faking the loss of children. The book can be downloaded for free as a pdf. New research has reinforced the finding that the school was closed by 2008 because it was loaded with asbestos and other bio-hazards. The latest study demonstrates that the Sandy Hook mothers averaged 36 years of age at birth, ten years beyond the norm, because they faked the kids using photos of other children when they were only six or seven. Check it out: http://themillenniumreport.... It was a two-day FEMA drill. The FEMA manual is in the book.
-- 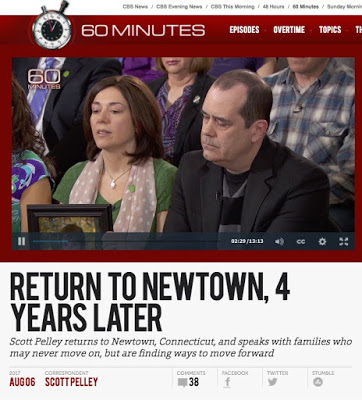 I included several important points about the "60 Minutes" special, which prominently features a most interesting couple, Francine and David Wheeler, who are both B-grade actors with political ties to the Democratic Party. Of course, CBS, with its vast investigatory powers, must already know.
Francine was personal assistant to the leading Democratic Party fundraiser, Maureen White, as James Tracy had revealed on his Memory Hole Blog years ago, which I had republished on my own. Maureen was one of the stars of the party with regard to its financing, having raised $51,000,000 during 2005 alone. Francine was her assistant:
They both B-grade actors who have credits about whom an exceptional video expose has appeared, where YouTube has shown a voracious appetite for taking down videos that expose Sandy Hook as a two-day FEMA exercise. As I observed in one of my published comments, the book is available on line for free: 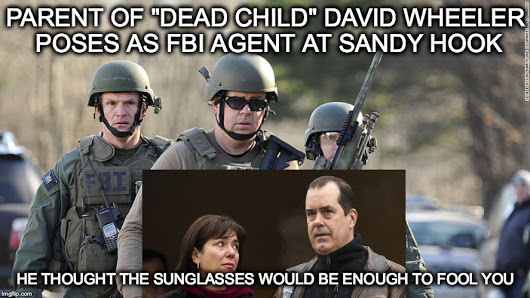 And David Wheeler played two roles at Sandy Hook: grieving father and SWAT team member, where he was caught walking up and down Dickinson Drive carrying an AR-15 upside down by the magazine! This guy is totally ridiculous.
Barack Obama flew them and other Sandy Hook parents (read: gun control lobbyists) to Washington, D.C., on Air Force One (which violates federal law) and arranged for Francine and David Wheeler to address the nation on gun control from the Oval Office.
The moral of the story appears to be that, if you are corrupt enough to participate in an elaborate scam that has deprived sympathetic but gullible Americans of between $28-130,000,000, you can profit handsomely and play your most important acting role.

CBS has now joined amazon.com and YouTube as accessories after the fact to fraud and theft by deception for perpetrating this elaborate hoax upon the American people. The Fourth Estate has sold out to the most corrupt elements of the government to betray us.
For participating in a faux event designed to instill fear into every parent in America for the purpose of promoting a political agenda, you can receive accolades from the President of the United States and know that, no matter how powerful the proof, the media will support you.
Jim Fetzer, a former Marine Corps officer, is McKnight Professor Emeritus on the Duluth Campus of the University of Minnesota and editor of NOBODY DIED AT SANDY HOOK (2015) pdf. His podcast is The Real Deal
Related- Nobody Died at Sandy Hook

Fetzer is one of the top intellectuals in this movement, his work on 9-11 is second to none, this is true of Sandy Hook as well. Sandy Hook is obviously a hoax.

Apparently one of the â€œlessons learnedâ€ from 9/11 was that when you inflict mass casualties, angry and bereaved families demand to know the truth and press for investigations. And so, after 9/11, it was decided that it would be much easier just to stage scripted events--not only do the â€œvictim familiesâ€ have no ax to grind, they are even rewarded with millions of dollars in donations, and thus of course have zero motive to push for lawsuits or investigations. Itâ€™s a variation on the movie WAG THE DOG.

Of course, this is not to deny that mass-violence events involving real casualties do take place. Any incident would have to be individually evaluated based on an accurate understanding of its facts.