Malcolm Muggeridge: From Communism to Christianity 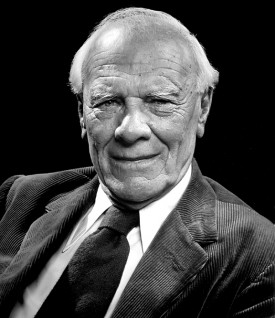 (Writer Malcolm Muggeridge, 1903-1990)
Malcolm Muggeridge (1903-1990) was an English writer who could see the coming NWO in the rejection of Christianity. He realized the alternative to religion is not "freedom" but satanism, decadence and chaos.
"Muggeridge realized the extent to which liberalism was destroying European civilization. Liberalism consummated itself in totalitarianism-- it was in fact the precursor of totalitarianism."
The Conversion of Malcolm Muggeridge
by Fr. MieczysÅ‚aw Piotrowski SChr
(abridged by henrymakow.com)
Malcolm Muggeridge was uncompromising in his quest for the truth-- both from a moral and intellectual point of view. Even as he fought against his own selfishness and unbridled passions, he engaged in an intellectual struggle in the pursuit of truth.
Totally imbued with the ideas of socialism in the early thirties, he embraced communism. Upon arriving in Moscow in 1932 as a correspondent for the Manchester Guardian, he was convinced he had come to a land where for the first time in human history there was no exploitation, a country in which equality, justice, and happiness flourished.
He was very soon disabused of this fiction. He had placed his belief in a utopia. He discovered that everything in the USSR was built on violence and lies. "In the beginning was the Lie and the Lie was made news and dwelt among us, graceless and false," he wrote.
Muggeridge came to the personal knowledge that communist ideology, when put into practice in the form of "real socialism," revealed her true barbaric face: an appalling horror of totalitarian enslavement and genocide. He witnessed the Great Famine in Ukraine, which killed tens of millions of people. The famine had been coldly planned and brutally executed by Stalin to punish the Ukrainian peasantry for their resistance to enforced collectivization. 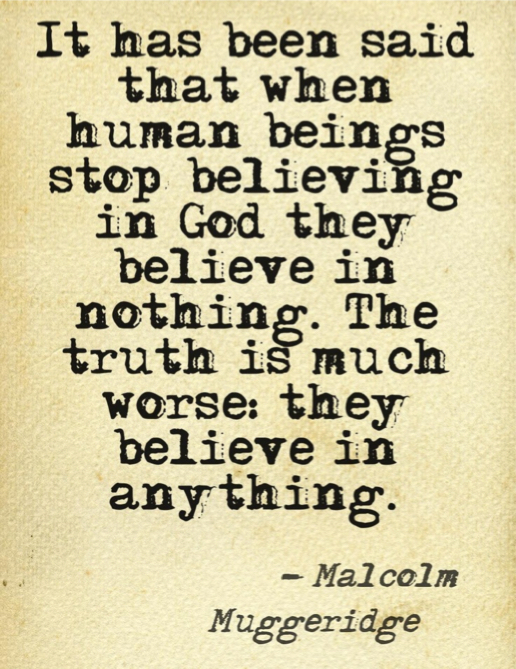 Meanwhile, the European elites continued to rhapsodize over the Soviet Union. A great many journalists, writers, and intellectuals, succumbing to political correctness and sheer opportunism, chose to deny the facts and wrote idyllic falsehoods about the situation in the communist "paradise." Muggeridge described this phenomenon of blindness, stupidity, and intellectual dishonesty (he characterized these as "a peculiar sin of the twentieth century") in his novel Winter in Moscow (1935), He was one of the few journalists who had the courage to tell the truth [and identify the Jewish character of Communism- hm]. He was the first to inform public opinion of the appalling crime of the Ukrainian famine. He dispatched his articles to the Manchester Guardian by concealing them in diplomatic pouches to prevent their seizure by communist agents...
Muggeridge felt a great longing to entrust his life, wholly and unconditionally, to Christ, who was all-powerful in His love and yet did not resort to means of coercion. He came to realize the catastrophic consequences of rejecting Christ and His teachings, for then man became unhinged and descended to levels lower than the beasts. Muggeridge felt a deep desire to become a Christian.
He wrote: "For me the Christian religion is like a desperate love. I carry its image within me and gaze at it from time to time with wistful longing."
TERRORISM OF LIBERAL IDEOLOGY
Upon his return from Moscow, he realized the extent to which liberalism was destroying European civilization. Liberalism consummated itself in totalitarianism-- it was in fact the precursor of totalitarianism. He observed that the insidious lie of liberalism lay in its denial of the fact that "left to his own devices, man becomes cruel, lustful, slothful, and prone to evil. ..."
Muggeridge defended Christianity even though he was not yet a Christian. He insisted that Christianity's worst enemy was not Stalin or Hitler, but liberalism. He warned that for over a hundred years the civilization of death in the guise of liberalism had been undermining the foundations of Christian civilization, which defended the dignity of every human person, freedom of conscience, and the right to life from the moment of conception to that of natural death. The ideas of liberalism when put into practice stamped out the Christian ethic and every principle of conduct flowing from it, thus leading humanity to certain self-destruction.
In his autobiography Chronicles of Wasted Time, Muggeridge spoke of the destructive influence on European civilization of Freud and Marx's views: "Freud and Marx undermined the whole basis of Western European civilization as no avowedly insurrectionary movement ever has or could. By promoting the notion of determinism, in the one case in morals, in the other in history, thereby relieving individual men and women of all responsibility for their personal and collective behavior."
Muggeridge stressed that not Charles Darwin, nor Karl Marx, nor yet Vladimir Ilyich Lenin, but rather Jesus Christ was the foundation of European civilization. Liberalism was a negation of everything revealed to man by Christ. When man rejected Christ, then the search for hope became hopelessness, the pursuit of happiness, ultimate despair, and the will to live--a death wish.
Muggeridge fought uncompromisingly against the "soft" terrorism of liberal ideology. In 1968, he resigned his position as rector of the University of Edinburgh. He resolutely opposed the demands of the students who called for the legalization of LSD on campus and the distribution of the contraceptive pill.
In his resignation speech, he derided the students' demands. He compared the moral state of the times to that of the Roman Empire in its period of decadence. "How infinitely sad, how macabre," he said, "that the form of their rebellion should be a demand for drugs, for the most tenth-rate sort of self-indulgence ever known in history." "Dope and bed!--he added--the resort of any old slobbering debauchee anywhere in the world at any time."
---
Related - Best books by Malcolm Muggeridge

Comments for "Malcolm Muggeridge: From Communism to Christianity "

To read Muggeridge's Christ and the Media was a watershed event in my life. That little book is truly a wonder to read and absorb, simply astounding and O for a world full of Malcolm Muggeridge's!!!! What I wouldn't have given to have met the man and sat under his tutelage. Wow, simply wow!!!!