(This is a longer excerpt from the BBC interview. Watch the host deflate when he can't convert Ali to his PC view.)
Many goyim have drunk the Cabalist kool-aid
and are accomplices in their own destruction.
They think that preserving their racial
heritage is "white supremacy" and "hateful."
Here is Mohammed Ali's eloquent rejection in 1971
of interracial marriage:
(See my comments below)
Interviewer - That's because, that's societies fault, we got to educate people about it.
M.A. - Life is too short for me to be catching hell for something like that, I'd rather be with my own, and have a beautiful daughter, beautiful wife, both look like me and we are all happy and I don't have no trouble. I ain't that in love with no women to go through all that hell, there's no one woman that good. You understand?
Interviewer - I understand, I do understand, I think it's sad .... 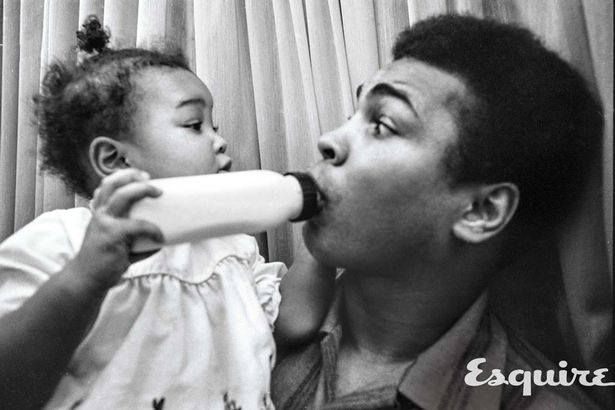 M.A. - (Interrupting) It ain't sad because I want my child to look like me, every intelligent person wants their child to look like them, I'm sad because I want to blot out my race and lose my identity? Chinese love Chinese they love the little slanty eye, pretty brown skin babies. Pakistani love their culture, Jewish people love their culture, a lot of catholic wanna be with Catholics and want the religion to stay the same... who would want to spot up yourself and kill your race? You're a hater of your people if you don't want to stay who you are. You ashamed of what god made you? You think he made a mistake when he made you?
Interviewer - I think that's a philosophy of despair, I really do
M.A. - Philosophy of despair? Here let me tell you, listen. No woman on this earth, not even a black woman in Muslim countries can please me and cook for me and socialize with me like my American black woman, no woman, and last is a white woman... can really identify with me and my feelings, and the way I act, and the way I talk.... it's just nature, you can do what you want, but it's nature to want to be with your own, I want to be with my own.
--
Incidentally, at the time when this interview was carried out (1971), about 75% of Americans would have agreed with him, including 40% of US Blacks.
------
Makow Comment- Defined by Cabalism and Talmud, Judaism is not a religion but a satanic cult. First Jews were inducted, then Freemasons and now humanity as a whole. A satanic cult exploits and controls its members by corrupting and making them sick, and then "managing the symptoms" for profit.
Making us sick requires dehumanizing us. They dynamite the four legs of human identity: race, religion (God), nation and family (gender.)
The Masonic bankers are promoting miscegenation to destroy the white race. They stigmatize anyone who objects as "racist."
But "racism" is only a negative thing when it imputes superior or inferior qualities to every member of a race by virtue of birth.
The "anti-racists" are the true haters; they wanted to dispossess or destroy the white race. So-called "racists" want to preserve all races.
Mankind is a family. All races are beautiful and have something special to bring to the party. True diversity means every race retains its distinctive qualities.  Together we are strong!
As for intermarriage, I believe that marrying within your race is an ideal but we shouldn't be dogmatic about it. I was married to a Filipina and members of my family are intermarrying. Love and individual freedom must supersede racial considerations. However, there is something very wrong when the mass media and corporations promote miscegenation based on the satanist agenda of the cabalist central banking cartel.
----
Related - Poll shows many Americans sympathetic to preserving racial integrity

A verse from Holy Quraan chapter 49 verse 13 also signifies why we are differently created by Almighty God.

''O mankind! We created you from a male and a female, and made you into nations and tribes, that ye may know each other (not that ye may despise each other).
Verily the most honored of you in the sight of Allah is , the most righteous of you. And Allah has full knowledge and is well acquainted.''

Although verse doesn't stop us from intermarriages.But clarifies why we are of different nations and tribes.
And it is but natural to remain in one's race, culture nation and tribe.
Makes perfect sense to me what Ali says in the interview.

I think Ali's statement about race is interesting and there's a lot of truth to it. However, if God didn't want the races mixing, then they wouldn't be able to reproduce. Under the natural law, we all have the same plumbing. It is only the skin color and maybe some other features, such as slanted eyes that are different. If a Chinese woman gives birth from a white husband then there shouldn't be any problem either way.

I actually prefer Asian women over any white feminist woman. And it is difficult if not impossible to find a white woman who has all their marbles. Almost all of them are one fry short of a Happy Meal.

Good article Henry! People who love their neighbor as themselves don't give two hoots nor a holler about who others choose for a helpmate. God doesn't make any junk, men create junk through their diabolical wickedness because of their own selfish, degenerate sinful nature to dominate and subjugate those less fortunate, why?... because they assimilate demonic spirits which dominate and rule them.

Most men never understand that they must imbibe the spirit of the living God in order to conquer their evil nature which can only be conquered by the power of The Living God.