Masonic media switches focus from hate crime against whites to gun control.
Latest (noon Wed)  FBI "still searching for a motive."
If this were a gospel festival and 559 blacks were killed
or injured, would the motive still be a "mystery?"
Whites are the only people who are never the victim of racist attacks.
Is that because the Illuminati have slated them for extinction?  They have been waging an undeclared war against Christendom for 400 years.
by Henry Makow Ph.D.
The constant theme of news reports is that Las Vegas shooter Stephen Paddock had no political convictions.
"Steve had nothing to do with any political organization, religious organization, no white supremacist, nothing," brother Eric Paddock said.
The media constantly intones that the shooter's motivations were a mystery. This in spite of reports that Paddock was a left-wing activist. There is the video above placing him at a Trump rally in Reno in August where someone greets him by name. And there are also reports that Antifa did it and their literature was found in his room.   See also: Multiple gunmen; Paddock was Antifa
The mainstream media which is closely aligned with the Communist Deep State must obscure the fact that this mass shooting was politically motivated in order to drive home their gun control message. We must ban assault rifles to protect ourselves from these nut cases. They cannot possibly let on that, like the Steve Scalise shooting, this crime was a hate crime perpetrated by a Clinton or Saunders supporter, or worse by a member of their goon squad, the Aantifa. 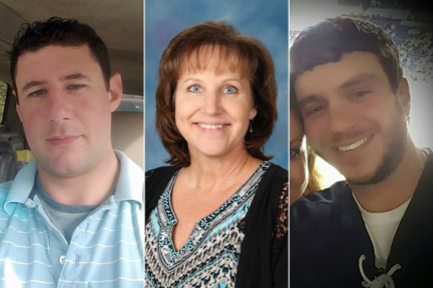 (Left, Las Vegas shooting victims)
If this were a gospel festival and 558 blacks were killed or injured, would they'd be saying the motive was a mystery? This was a country music festival and country music fans are overwhelmingly pro-Trump. They are also white. Most of the casualties were white.
In fact, classic country music expresses the visceral America that Trump appealed to, and the Communist Deep State intends to destroy.
Was this the first salvo in a Civil War? A precursor of white genocide?
We have to remember a couple of things. 1) None of these mass shootings are random or spontaneous. They are all organized by the Deep State. 2) In each of these cases, the mass media is complicit in covering up the truth and purveying a carefully contrived lie. Of course, this includes 9-11 and JFK and sundry political assassinations.
The mass media has extra cause to distort this story. They are guilty of purveying the psychopathic hatred of Trump that would inspire someone like Stephen Paddock to do what he is accused of doing. This hatred is exemplified by the Jewish CBS lawyer who rejoiced at the killing of Republicans.
What is Trump's crime? Impeding the handover of the USA to the Communist New World Order.
This is the first mass shooting in almost a year, the first on Trump's watch. The question is, Is Trump in on this crime as was his predecessor, the Communist traitor Barack Obama? Or is he in the dark. Is this something the Deep State is pulling on him? If he touches gun laws, he is signaling complicity in this atrocity and will be dead meat. 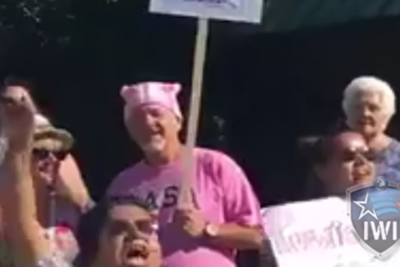 Regarding Ken Adachi's contention that no one was killed, take a look at the video I found online. If this was all faked and no one died, then the images in the video were damn good fakes. They may take the video down, so see it while you can.

I am surprised that no one seems to have figured out that the final objective of all these "shootings," fake or real, is the same. That is martial law as an excuse to take away the guns of the American citizen, one of the last real bulwarks to the agenda of world conquest.

Just a note to say that Ken Adachi is totally incorrect when he asserted that no one was killed or hurt in the Las Vegas incident.

I respect Kensâ€™ work but he is being arrogant when calling others morons if they believe anyone was killed. Something can be a fraud like 911, and still have injured and dead. My husbandsâ€™ superior called to let everyone know he would not be in to work as he flew to Vegas to be with his sister whose husband and friend of were both wounded - one with a shot in the stomach. As well my neighbor knows a surgeon living in Vegas who had to change his personal plans to get to the hospital to help treat victims.

Thatâ€™s two people I know who directly know someone affected. I donâ€™t know why anyone can make a claim to knowing what actually happened when there is so much conflicting data. The only thing we can know is that it most certainly was some kind of op to forward the agenda further, but it ends there.

I hate writing this, I'd far rather write an optimistic piece, but in order to be positive, some reality has to be faced first.

I just watched a 10-minute compilation of cell phone footage from the event.

At one point a man says that the sound is coming from the speakers and at another point, I believe I heard another man saying that the bullets are fake.
Would it be impossible to place a good number of crisis actors in the crowd? Probably not. People of low character are easy to find.

Personally I hope this is a real event, as sad as that is to write. It would be far better if genuine people did die, rather than the realization that this world is filled with the most audacious liars and that humanity is collectively forced into a charade.

We may be witnessing more of what Michael Hoffman calls the revelation of the method, where collectively our spirits are being murdered: we are forced to live in a lie, mocked by being presented with absurd events as true and being so disenfranchised we have no voice to defend ourselves - if true this would equate to a form of psychological assault/ torture.

I hope more information comes out in regards to this being a genuine event, I really do. Bullets are not scary, liars and traitors are though.

Also if the sound system was hacked, then we have to be sceptical of Jason Aldean to his role in all of this.
It's obvious that country music is not innocuous... I listen to a lot of it while I drive, but if you pay attention to the lyrics its largely the same Illuminati degenerate shit but just to a lesser degree... sex, alcohol, partying, narcissism, woman worship.

Henry, I was leaving another concert and got caught in the traffic mess miles away. My good friends were stuck in traffic near the Mandalay shooting. Another friend had his son in law shot and killed at the concert. His body is being held. There were people on gurneys in the halls according to my nurse friend at Sunrise hospital. People did die but this IS a setup. A victim was shot at the Hard Rock Hotel. That is not even close to the concert. This was well planned by more than one lone shooter. I have yet to see bouncing ricocheted missed bullets in various videos.

We must consider the possibility of multiple snipers.

How could one sniper do that much damage?

Reports of all the rifles found in Paddocks room donâ€™t make sense.

All he needed were loaded ammunition clips for one rapid-fire rifle.

Why would Steve Paddock fill his hotel room with ANTIFA hate literature if he were entering upon a suicide mission?

And how could Steve Paddock carry 23 weapons to his room undetected by hotel staff?

All the above-unanswered questions make me doubt we are not getting the whole story yet.

The USA has murdered tens of millions of people, bombed dozens of countries and locked up millions of blacks and browns FRAUDULENTLY and here you are mumbling this shit:

Was this the first salvo in a Civil War? A precursor of white genocide?

ARE YOU STUPID OR WHAT? WHO HAS ALL THE GUNS? WHO HAS THE COPS ON THEIR SIDE? WHO RUNS THE MILITARY?

YOU STUPID FUCKING IDIOT. YOU'RE EITHER RETARDED OR A DISINFO AGENT.

INSANE, IDIOTIC PEOPLE YOU ARE. WICKED.

As Mae West said, "It's better to be looked over than overlooked!"

To answer your question, who has all the power? The answer is Freemasons and they are not on the side of Americans of any color.

Trump did the Vegas massacre. The zionists behind him. Just like the "shootings of cops" during the campaign. To manipulate idiots who don't have any balls unless they're part of a pack or critical thinking skills.

To distract from the obvious racism in how they dealt with puerto rico. MSM like SNL extremely popular exposing and ridiculing his racist scumbag ass. He himself is a satanist.

You know, for somebody as versed as you in the illuminati YOU HAVE A HUGE BLIND SIDE of anything that implicates wrongdoing on the part of right wing whites WHEN THE HEART AND SOUL OF THE RETHUGLICAN PARTY WERE PRECISELY THE MOST POWERFUL SATANIST BABY EATERS BUSH, ROCKEFELLER AND KISSINGER (CHENEY TOO). These idiots have been in bed with the devil and now you've got fleas. Confess your sins, it is written. We Christians HAVE TO FORGIVE YOU but you must repent from waging war on us by deception.

Capitalism and communism were both created by the Elders of "ZION" (the fake one). Why do you fall into their spiritual trap? Jesus said, love was the way.

Another point, the NWO loves to kill Christians. Reference your previous article on dropping of the A-bomb on the Christian center of Japan.

It wouldn't be wrong to assume most country music fans are Christian.

(not exactly in response to this article)

genocide in Puerto Rico, Trump is in on it and knows about it...shit rotting on docks, people are dying just like Katrina!
idiots still think Trump is being shielded...BS he is the chosen vessel to bring America down and destroy decency
more wars being set up
US base in Israel, biggest shit storm in history is in the making and the wicked are being marked by God for total destruction...I guarantee it. We are at the beginning of the end and total war of light vs darkness. Evil is going insane and God is going to let it happen only to end in their destruction
the truly wicked of this world KNOW their time is short...they will ramp up killing, stealing and destroying
there is NO left/right they control it all and all the mainline corporation and media are in on it
HENRY KEEP PUMPING OUT THE LIGHT...WE WIN IN THE END...THIS LIFE IS NOT LIVING...TRUE LIFE IS COMING TO THOSE WHO LOVE THE TRUTH