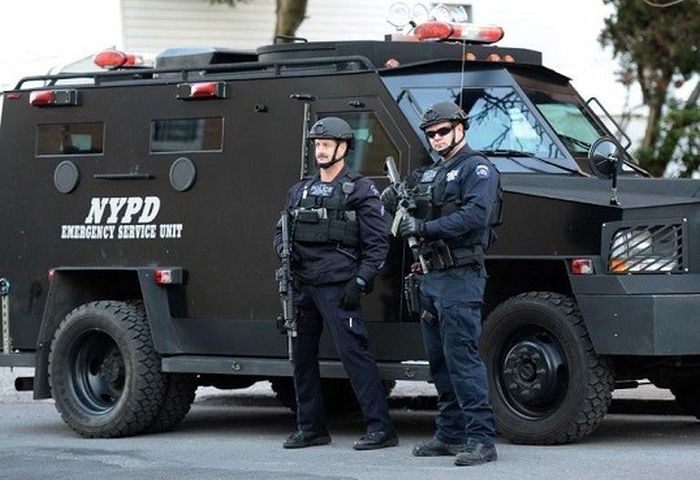 Did the NYPD Counter-Terrorism Unit have advance warning
of the NYC Halloween terrorist attack which killed eight?
The perpetrators of 911 -- i.e. Intelligence agencies like the CIA and Mossad- fund ISIS and are behind all terror attacks which are designed partly to create a climate of hatred against Islam and sympathy for Israel. Patrick Stewart, who happened to be at the scene Tuesday afternoon, explores the other motives behind this state-sponsored terror. How long will Westerners tolerate this secret war on them perpetrated by their own Masonic-controlled governments?
Julian Assange  ðŸ”¹â€ @JulianAssange

If the CIA spent more time investigating terrorists and less time training and arming them we might not have had today's truck attack in New York.

By Patrick Stewart
(henrymakow.com)
A question average New Yorkers close to the West Side Highway of Manhattan Tuesday October 31, 2017 are asking: Why were there so many NYPD Counter-Terrorism trucks attended by scores of uniformed NYPD Counter-Terrorism Officers flanking these trucks, hours before the attack itself? 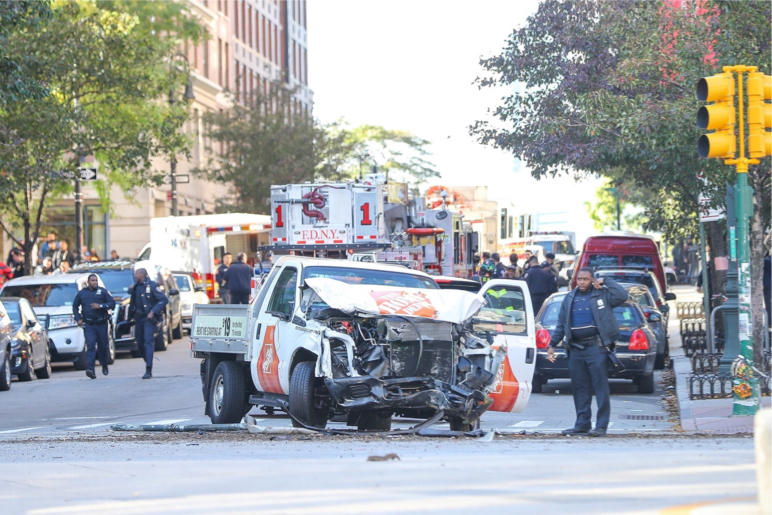 One doesn't have to be inducted into the secret world of NYPD Counter-Terrorism or the NYC Joint Terrorism Task Force ("JTTF") to know that the NYPD Counter-Terrorism Unit is a special, ad hoc, and only "First Responder" force, that is, no one should either see or hear them unless there was "intelligence chatter" indicating an imminent terrorist attack, or after a terrorist attack actually takes place.
So why in hell were they all hanging out in droves today, hours before the attack, in the literal vicinity of where the attack took place?
Nay-sayers turn around and respond that "the NYC Halloween Parade is a possible terror attack location," or other such nonsense, but since when did the simple NYPD Officers, who are usually called upon during parades or other New York City gatherings, get replaced?
It is also no secret that the leaders of the NYPD Counter-Terrorism Unit such as James Waters, Scott Shanley, Daniel Magee, and Chris Zimmerman have been outed as drunken, irresponsible, belligerent, alcoholic, pugnacious and violent bullies, when only a few weeks ago six of them were forced to "de-plane" from a jet with 200 other passengers that was set to travel to Kabul Afghanistan for the purpose of "training" their "little brown brothers" in Afghanistan.
Apparently, they verbally and physically bullied and intimidated the entire jet crew, including the pilots, to the point where they were treated like  "Terrorists" themselves, and a danger to the other passengers and crew itself. 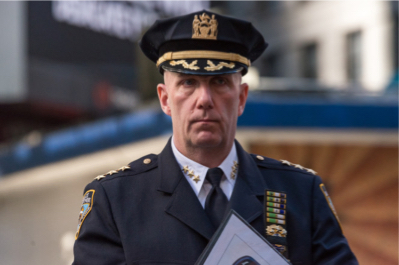 (left, James Waters)
These are our "counter-terrorism" leaders who literally have been vested with the power of life and death over the New York City (and rest of the nation) masses.
THE MUSLIM BROTHERHOOD
But we must also discuss the 800-pound gorilla in the room - the Muslim Illuminati, or the "Muslim Brotherhood," which was founded by 33rd Degree Freemason, Hassan Al-Banna.
From this Muslim Brotherhood, all virulent strains of "Islamic Fundamentalist Terrorism" was spawned - Al Qaeda, Al Nusra, Wahhabism, ISIS, Daesh, or whatever else you want to call it.
In other words, all "Islamic terrorism" was borne of the Illuminati Freemasons, with the express purpose of fostering and creating the "Hegelian Dialect," or "constant and opposing factions," in order to poise one side against another, Christian against Jew, Jew against Muslim, Gay against Straight, Man against Woman, Black against White, so that each and every one of these different factions would scream out for protection and uniformity in the form of the ultimate Illuminati Freemasonic goal - a New World Order with its home base in the Middle East, headquartered in Jerusalem, no longer a home for the Jews, who are just being used to settle and clear the land, but to house and home the Illuminati Freemasons when their "work" is complete.

And these periodic senseless violent terrorist attacks in all of the major cities throughout the world are for the sole purpose of further clamping down on the People's civil liberties, human rights, and enveloping them all in the firm grasp and control of the Illuminati Freemasons, with the ability to be taken out, whenever they step out of line.


Just ask the "enforcers" who were placed in charge of this gradual task - such as the wonderful moral characters of the people who run and lead the NYPD Counter-Terrorism Division, already described above.
--------
First Comment by BH- "The war is against us."
The Sandy Hook and Boston Marathon bombing attacks were hoaxes coinciding with drills. The recent thwarted bombing at the Dolphin Mall in Sweetwater, Florida by a deranged Honduran with ISIS sympathies (where the FBI set up a patsy with a pressure cooker bomb) and this Sayfullo Saipov character who was also known to the FBI is troubling, to say the least.  The Halloween parade and the Boston bombing are similar in the fact the anti-terror squads were out in full force. Controlling the scene is a crucial element to any of these attacks.  Whether this was a hoax with crisis actors or real dead victims is almost irrelevant. The Las Vegas attack looks staged, but the victims look real. Regardless, we are being ruled by false flags.  This latest ISIS-inspired actor will force the government to take internet liberties away, as the story now is that he was inspired by online radical material.  The war is against us.

It is standard procedure to deploy law & order forces in city centres prior to holidays, namely when large concentrations of civilians occur in town-squares, Just-In-Case an attack would take place. E.g. in Israel there's such heightened contingency every single holiday, yet mostly the terror attacks
occur outside of the holidays. Conclusion: correlation isn't causation.

Manhattan is a big place. The anti-terror cops can't be everywhere. But they were here.

As for this latest " terrorist attack" in New York yesterday the culprit of this crime obviously wanted himself identified through the truck rental agency that he gave his identity to.

My guess is that this will go down as another random act of terror by a lone foreign assailant with possible foreign ties.

This act will be defined as an attack on freedom and liberty much like 911 because the suspect is foreign and not domestic.

America's position in the Syrian conflict has resurfaced again in the news headlines so don't be surprised that ISIS is being mentioned again.

It's no secret that the neocons in Washington still want Assad removed from power.

And, I hope this latest " terrorist attack" will not be used as a club against the Trump Administration to influence his foreign policy in their direction.