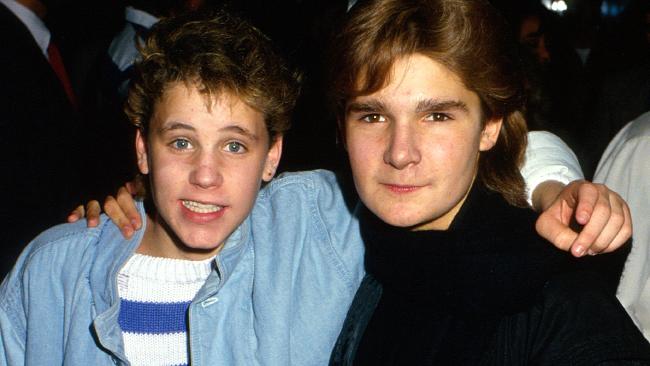 (Feldman, right, with Corey Haim who died in 2010, at age 38 of drug overdose)
Corey Feldman's Abusers Are Small-Timers
There is an assumption that the Hollywood executives
who abused child actors Corey Haim and Corey Feldman
are familiar names like Rob Reiner or Stephen Speilberg.
Not to minimize the wrong, but Feldman's abusers are no longer players and never were.
Merit Freeman has compared Feldman's autobiography to his movie project casts and deduced who his abusers are.
Making the talk-show circuit promising to "release every name"
No need to keep us in suspense any longer Corey!
Comments on Voat
by Merit Freeman
(henrymakow.com)
Actor COREY FELDMAN is speaking out against the pedophilia and the rampant sexual abuse that takes place in Hollywood. He has been harassed and threatened for his efforts. He is hounded, on a daily basis, to release the names of his attackers. Little do most people know, he has already done so and the authorities did nothing about it.
In December of 1993, FELDMAN met with Santa Barbara county sheriffs in California and recorded a deposition, naming his attackers. Authorities, however, did nothing about it, as they were too busy trying to build a case against pop music icon MICHAEL JACKSON and FELDMAN's case did not fit into that agenda.
Celebrity Justice: Corey Feldman Meets With Authorities [VIDEO]
He faces daily criticism for not naming his attackers but is frustrated because he has already done so and gotten nowhere. He appeared on ABC's "The View" in 2013 to talk about Hollywood pedophilia and was harshly admonished by hostess BARBARA WALTERS for doing so.
Corey Feldman On "The View" [VIDEO]
FELDMAN has started a campaign to raise money to make a film that will expose the pedophilia that takes place in Hollywood. So who are FELDMAN's [and pal COREY HAIM's] abusers? In his biography "Coreography: A Memoir," he identifies them [using pseudonyms] as "TONY BURNHAM," "RON CRIMSON," "RALPH KAUFMAN" and "BILL KAUFMAN," but their actual names are as follows. (Excerpts are from the book.)

TONY BURNHAM = DOMINICK BRASCIA SR.
"I met some older actors, too, in particular, Tony Burnham, an overweight character actor in his twenties, who I recognized immediately from 'Friday The 13th: A New Beginning' ... Tony must have thought of Haim as his boyfriend ... I still thought, erroneously and ridiculously, that because Haim 'wanted it,' the abuse had not been Tony's fault."
YouTube An Overweight Character Actor
"RON CRIMSON" = Cloyd Jon "JOHN" GRISSOM "I had taken some pills, some concoction that Ron had made up ... Ron came over and sat down next to me, a triple-X magazine in his hands ... Ron started touching me, reaching across my thigh to the crotch of my pants ... He unbuttoned my pants, and took out my penis ... He pushed me on the bed and took me in his mouth ... When I woke up, he was on me, touching me, tugging on the zipper of my pants. I realized it was happening again ... Ron was still having his way with me ... Surely Ron wouldn't attempt to sodomize me with his own mother in the house [he would] ... Under Ron's tutelage, my drug use has progressed quickly. I'm doing coke constantly, with Ron ... Ron is pushing me to try crack ... 'Dream a Little Dream' is filming in Wilmington, North Carolina. I've already been here once, to assist with location scouting, but now I'm back, checking into my room at the Shell Island Resort. Ron is with me, still acting as my assistant. By the time filming ends, he'll have scored his second cameo in one of my movies - I managed to get him a small role in 'License To Drive' as well ... I wake up. Ron is at me, tugging on my pants."
"Ron Crimson" = CLOYD JON "JOHN" GRISSOM has absconded to Mexico. He is still a sicko it looks like. He pulled his FB page, but I dug this up [https://gofile.io/?c=NjLbiL#89666]. He has pics of Feldman on it, and of Sean Astin [another child star]. 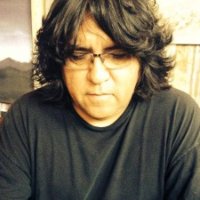 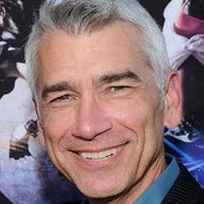 I began to site your awful research which I feel needs an apology to the Haim family after you stated Corey died of an accidental overdose..

Nothing of the sort!
Check official cause of death reports from the accurate official sources-
He was reported to have died from Pneumonia.
He was found too to have an enlarged heart, and it also may have been part of his death.
Not accidental drug use.