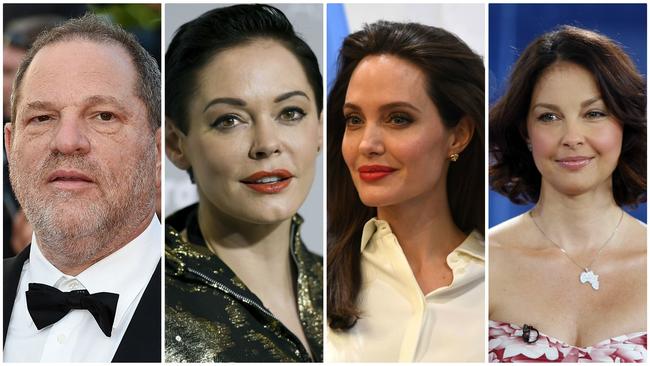 (left, Weinstein & some of his actress accusers.)
Overnight, Harvey Weinstein went from player to pariah. This behavior is typical of the Illuminati and has been going on for years.
He deserves to be demonized but Lanny Goodman asks if there is
a hidden agenda behind throwing him to the wolves.
Disclaimer: I think Goodman's thesis is overwrought and farfetched
but he claims to have high Masonic sources. Make up your own mind.
by Lanny Goodman
(henrymakow.com)
Just as Communists in the former Soviet Union jailed and murdered almost 100,000,000 Russians under the brutal dictatorship of Jozef Stalin by his secret police chiefs Felix Dzerzhinsky and Lavrenty Beria, a similar purge is about to happen in Freemasonic America.
Because of Joe Biden/Bill Clinton's ill-advised VAWA law of 1994, nearly 1/3 of American men have had a complaint against them by a woman. Most of these police inquiries resulted in no arrest or prosecution, 70 million Americans have a criminal record.
The Harvey Weinstein prosecution establishes the fact that local police may now "re-open" already closed past complaints, or "re-visit" formerly closed cases in order to "re-investigate" and "use-prosecute" (and subsequently "re-jail").
The Illuminati Freemasons are using both the mainstream and the alternative media (united against the understandably vile and criminal Harvey Weinstein) to publicize the fact that there are no statutes of limitations for any man in the USA on these "sexual assaults and crimes," even when these idiotic baseless events occurred decades ago.
And since 1/3 of all American men have brushed with domestic disputes/issues/complaints/difficulty, it's literally a "turkey shoot" on the American male. The problem is, the Illuminati Freemasons will only use these arrests against their political enemies. For example, they have really hated Oliver Stone for decades, because he mercilessly exposed and attacked them in his films such as JFK, Platoon, Wall Street, Born on the Fourth of July, Nixon, Salvador, World Trade Center, W., South of the Border, and Snowden, he finds himself (as of today) under investigation (and possibly arrest) for sexual assault for some stupid incident that happened back in 1991.
A list of these "dissenters" has been compiled by the Department of Defense/Pentagon over the past two decades using email, text, voicemail, phone call, facsimile, personal eavesdropping, internet, and social media data and communication, to determine once and for all, if that individual is either a "friend" to the New World Order, or in fact a problem and a thorn in their side, set to be eliminated, just like Stalin did.
Harvey Weinstein, even though a fabulously wealthy and powerful Jewish man, was thrown under the bus and sacrificed, just like the Illuminati Freemasons sacrificed Jews in the German Holocaust, because frankly, they are not Jewish, nor do they consider themselves real Jews. They are Occultists, Luciferians, who believe that they are in fact personifications of God on Earth, left to their own devices, henceforth their motto "Deus Meumque Jus," or "God is according to my right thereto."
Coupled with the Las Vegas mass shooting, the U.S. Government is poised to begin confiscating all automatic, semi-automatic, and assault weapons because apparently each one can be converted to another, with or without a "bump stock" mechanism, and these would be the only weapons Americans could have used to fight back against federal agents.
And now yesterday, with President Donald Trump's decision to "decertify" the Iran Nuclear Agreement, or JCPOA, the scene is now set for a series of horrific "false flag attacks"  portrayed as an attack by Iran in retaliation for the U.S. breaking of this deal, sanctioning their Revolutionary Guards in the process.
The world has never been less safe than it is now, for both Americans and the world, and the time is now ripe for complete and total Illuminati Freemasonic control in a one-world government, with all of their enemies and political opposition immediately marginalized, jailed, or outright murdered, all under the "guise" of past domestic violence or "sexual assault" fraudulent complaints, frivolous investigations or false convictions.
---

Lanny Goodman's essay is good - he's living up to his name! I owe much to Jews like Lanny (and yourself) whose truthful acts have helped me so much, to move beyond my former simplistic anti-Semitism.

I myself had been seeing this as a purge before I ever saw Lanny's essay. Ganging up on Weinstein, who was basically a commie insider, mobbing him with Red Guard style accusations of pseudocrimes, mobbed by these monstrous Hollywood tarts accusing him decades after the statute of limitations, if what he did was even a misdemeanor at all.

Weinstein and Weiner. Weiner was a commie insider too, a Congressman and the husband of Hillary's Girl Friday. Weiner also got the purge treatment.

And then poor Warmbier. A young Jewish man with a kindly face, slowly tortured into irreversible idiocy (NOT a coma - he was blind and deaf but constantly shrieking, according to his father) for doing NOTHING, except perhaps being the son of Jews who were too "liberal" and misled him into going to N. Korea to promote "peace". The message:

"Warbier didn't even deface that sign, you all know we're lying about that. But watch it Jews. We'll torture you and abuse you beyond your worst nightmares at the drop of a hat."

This is the savagery of communist "party discipline". We have to consider the possibility that communism isn't really "Jewish" at all. Communism is a sociological cancer that afflicted Jews more than other ethnic groups because it fed on the old Khazar vs. Slav rivalry.

False rape charges are the most common false charge seen in our jails. Usually the accuser is the wife or an ex-wife trying to get revenge. A simple lie can destroy a man's life and the lives of his children.

Women making these false charges are rarely prosecuted when discovered. Just call the cops, get interviewed and sit back and watch the fan splatter everything over the accused.

Some women even go to the point of having a friend beat them and leave bruises.

A man would be crazy to return with the woman and I have seen a surprising number of men return after the charges have been dropped.

Despite the fact that Hollywood is filled w/ gays, pedophiles, and actual, literal human sacrifice rituals, it's interesting that the Harvey Weinstein scandal has thus far been constrained to good old-fashioned "he hits on women"-type of misconduct.

For me, the biggest red-flag was when Kevin Spacey got "caught up" in the Weinstein scandal for alleged sexual assaults on women, despite the fact that Spacey is a notorious homosexual.

To me, so far, most of the Weinstein scandal seems to be about framing the narrative of sexual perversion in Hollywood as old-fashioned "man-on-woman" type mistreatment, and nipping in the bud any discussion of the deeper, more Satanic forms of misconduct that are rampant amongst the Hollywood elite. I'm not sure that is going to work in the long run, in fact it already seems to be backfiring.

Its a bit of a stretch Henry. It could be as simple as him pissing off the establishment for his boorish behavior. Were all the actresses shiksa's or did he lean on some well connected Jewish women too? Remember that Bernie Madoff didn't get fingered until he started ripping off fellow Jews.

It's a bit like Stanley Kubrick's last movie Eyes Wide Shut which Tim Rifat (a regular guest on Rense.com) says would have been more accurate if those twin women were underaged girls. HarveyGate distractions versus Pizzagate investigations (that Trump promised before the election). Funny enough in David Irving's Goebells book we have an investigation into pedastry in the Catholic Church. In England why just Rolf and Epstein and not those whom the 300 Scotland Yard detectives said they could not investigate about a certain level of power?

When we are talking of the New World Order, there is a tale of two cities to keep our eyes wide open on. Old School Rothschilds NWO or the grander chessboard including Putin.

HarveyGate: Yeah, for myself, a few days ago I reduced it to what in my mind was its lowest common denominator: To men-bash on a grand scale, with a subordinate agenda of propping up The Democratic Party, though the subordinate part is a little more cryptic. Castration has many faces.