Jim Stone - Fires in California Were Not "Wild" 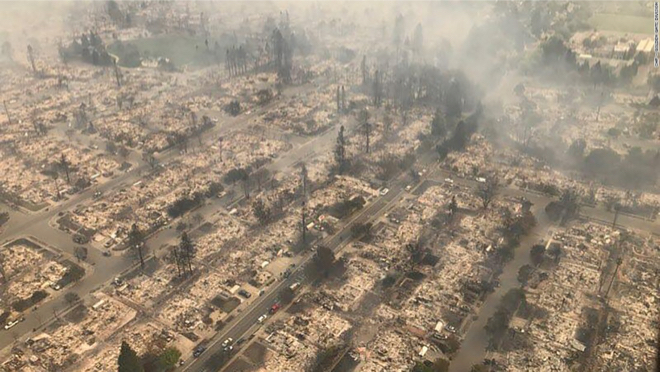 More than 5700 structures and 200K acres burned in Santa Rosa
41 Dead. It looks like Hiroshima. Houses burned but not trees?
Electronic malfunction.Was this fire caused by
a direct energy weapon?
"MANY MANY people saw electrical flashes that made no thunder in the perfectly clear blue sky, and worse, some people even saw small blue sparks everywhere in the air around them."
Santa Rosa Fires Ended Up Being Major
by Jim Stone
(henrymakow.com)
At first, I was skeptical, but I went over numerous social media posts, several videos, and a few messages and it appears the fires were set by an atmospheric weapon. 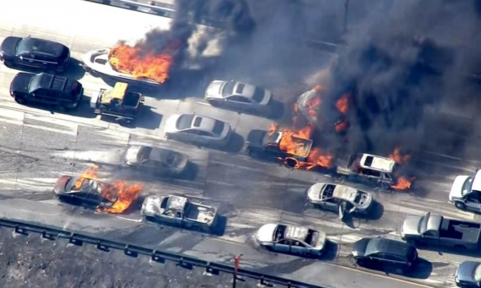 Comments for "Jim Stone - Fires in California Were Not "Wild""

As Jim has pointed out for years on his site ( 82.221.129.208) in Mexico, where he fled to after his Fukushima Sabotage report, you can cheaply enough and without too much regulation built a concrete home, in the USA there appears to have been a concerted effort by the elite to make almost all homes wood. The Big Bad Wolf and the Three Little Pigs comes to mind. "I'll HAARP and I'll HAARP and I'll burn your houses down". For those who say certain trees won't burn, I'd say have another look at those photos and video. At the very least within 20meteres of a burning house the leaves, if only non conifers, would have turned into potato chips and shriveled up and dropped off those lucky trees and if the weather was hot enough to cause that, and they would have been primed to do so. Dresden is also coming to mind. To paraphrase David Duke, there are no coincidences, just Cohencidences.

On the California 'wildfires', I find it rather interesting this is where Rosa Koire who wrote "Behind the Green Mask" lives. She is the leading voice working to blow the lid off Agenda 21 and has had an ongoing public lawsuit against the City of Santa Rosa. What a way, along with the other geo-engineered hurricanes and fires, to get people out of single family homes which they will probably never be 'allowed' to rebuild. Oh, but you can live in a 400 square foot apartment in the concentration camp - I mean city! Agenda 21 is being pushed at all cost and they will stop at nothing.

.California and Spain have very similar climates and both big exporters of wine. Drone footage coming in looks so similar. Buildings are gone but trees still standing. Very disturbing

Same basic weapon that disintegrated the twin towers. Remember? No debris on the ground, just dust, as concrete and huge steel girders just turned to dust on the way to the ground.