Is this a test run for a future false flag [or secret attack] involving biological /chemical weapons?

"The project area is located only 470 feet north of Chilocco Creek, a vital part of the county's watershed. KOCO in Oklahoma City reports that many people have called their newsroom and sent messages, expressing their concern about the safety of people living in the area."

Under the banner of Project HODOR [Hazards Of Dynamic Outdoor Release], the United States Department Of Homeland Security [DHS] will be holding drills simulating a chemical & biological weapons attack near the Oklahoma / Kansas border in January - February and June - July 2018.

Aerosol Biologists from Sandia National Laboratory, Aerosol Engineers from the National Bio-Defense Analysis and Counter-Measures Center [NBACC], scientists from Oklahoma State University's [OSU] Multi-Spectral Laboratories [UML] and numerous supporting state and federal agencies have partnered together for the exercises, which will reportedly be used to determine how humans would fare if biological weapons were used in a terror attack.

Don't let the Oklahoma university participation fool you. UML is NOT a public institution, it is a PRIVATELY OWNED FACILITY which provides research, development, testing, evaluation and tactical training to the United States Department of Defense and intelligence communities. Their mission statement is to:

Their first exercises in January 2018 will involve the airborne release of Titanium Dioxide [TiO2] and "Btk" [the Kurstaki sub-species of the Bacillus thuringiensis bacteria] combined in the form of bar-coded spores of the biological insecticide DiPel. They plan to use non-bar-coded airborne spores in their secondary exercises, which will require much more time and labor to execute.

Btk can cause skin redness, rashes and irritation in humans, as well as hay fever, throat irritation, upset stomach and difficulty sleeping. The project area is located only 470 feet north of Chilocco Creek, a vital part of the county's watershed. KOCO in Oklahoma City reports that many people have called their newsroom and sent messages, expressing their concern about the safety of people living in the area.

The bar-coding will be done by using "DNATrax" technology from Safe Traces, Incorporated [formerly DNAtrek]. DNATrax was initially funded by and created for the United States Defense Threat Reduction Agency [DTRA]. DHS admits:

"The safety of DNATrax particles cannot be assumed, therefore, its use presented unknown risks, not conducive to testing objectives."

Titanium dioxide has been classified by the International Agency for Research on Cancer [IARC] as a Group 2B Carcinogen. High concentrations of pigment-grade [powdered] and ultra-fine titanium dioxide dust can cause respiratory tract cancer. Studies have also found that titanium dioxide nano-particles can cause an inflammatory response and genetic damage. It can also cause Yellow Nail Syndrome.

According to Dr. JOSEPH MERCOLA, nano-particles of titanium dioxide can easily penetrate the skin and travel to underlying blood vessels and into the bloodstream. Evidence suggests that it may also induce toxic effects in the brain, cause nerve damage and have negative effects on brain cell viability and function.

Titanium dioxide nano-particles are capable of reaching numerous bodily organs via the lungs and gastrointestinal tract. A recent study showed that titanium dioxide nano-particles induced a decrease in mitochondrial membrane potential, suggesting mitochondrial damage. Researchers believe exposure to such particles may lead to neurological dysfunction, as they harm astrocyte cells, which help regulate serotonin, dopamine and other neurotransmitters. 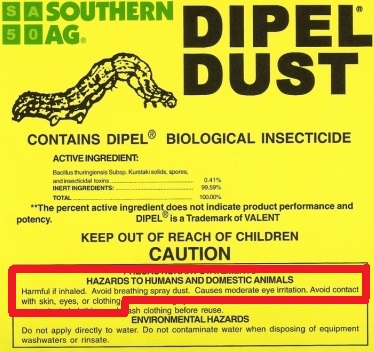 So, not only doctors, but the makers of the DiPel insecticide themselves EXPLICITLY WARN people that it is HARMFUL IF INHALED, yet the DHS and the United States federal government think that it is a good idea to release these toxins into our air supply? I call BULLSHIT! Can you say: Test Run For POPULATION CONTROL?

HISTORY OF TESTS ON CIVILIANS

And what if the government is LYING about what they plan to do at Chilocco? Think they wouldn't perform secret tests on their own citizens? Just ask the city of Saint Louis about that! In 1994, the U.S. federal government admitted to testing radioactive chemicals on the city's residents without their knowledge or consent in the 1950's and 1960's as a part of Operation LAC [Large Area Coverage].

Or in 1966 when government officials conducted secret "vulnerability tests" on the New York City subway, exposing an estimated 1,000,000 people to bacteria spores without their knowledge? Or in 1955 when the CIA [United States Central Intelligence Agency] conducted open-air biological tests of the "whooping cough" bacteria known as Hemophilus Pertussis? Or in 1953 and 1954 when the U.S. Army sprayed 6 kilograms of zinc cadmium sulfide onto unsuspecting citizens of Winnipeg, Manitoba, Canada?

And even the location is BULLSHIT! A Native American reservation?! Are you kidding me? Hasn't the U.S. government done enough to these people? MY people?! Now they have to use their land to spread harmful chemicals that could poison their water supply? When will it end?!

And need I even mention the numerous occurrences of drills such as these "going live"?

If you want to try to stop these exercises [and you SHOULD], please send an email to BioTest@HQ.DHS.gov or HelpDesk@OKState-UML.org or write to:

A petition, which has garnered nearly 10,000 signatures, has been started on Change.org to stop the exercises.

The Nuremberg Code requires all affected individuals to provide informed consent. Will detailed mailers be sent out with all residents responding to the affirmative, indicating they've been informed and provide consent?

One wonders whether such live biological drills are proposed and carried out just to take the measure of our apathy. I have emailed high school classmates, family and friends in the area just a little north of the proposed test site, in Kansas. Got a response back from two, one of whom said he would check with his county agent next week about the use of one of the chemicals which is used in agriculture. The other volunteered that the time of public comment is over, that it didn't do any good, and that he thought it odd that they had chosen an Indian school. One man I emailed is a former state court justice, another a graduate of MIT and Dallas Theological Seminary, Scofield's school: I have been wrangling with him for years about his theology. Some are farmers and ranchers.

Maybe it is a gauge of my popularity that I've received so little response! Even so, I was shocked to read this news, maybe the more so after poring over Michael Hoffman's book Secret Societies and Psychological Warfare who suggests, too, that it is our apathy and lack of will about such things, plus our lack of memory, that allow such things to proceed. We forget that it was the EPA, under Christine Todd Whitman, a former governor, who told New Yorkers and in particular the first responders, that the air in Lower Manhattan was safe to breathe in the immediate aftermath of 911. So much for the Environmental PROTECTION Agency. Have they all been co-opted? This is a terrible indictment of our society! But, what isn't, these days! And, we do not have all the facts. Maybe the Indian School was offered a lot of money to stand for this test? Were they forced into it?

Maybe this is all old news to the people living in that area, but it was news to me. Thank you for drawing it to our attention, the world over now.

Thanks for the heads up, Dr. Makow. Truly sad that we live in an age when we have to worry about this stuff . . . our own "government" being our own worst enemy. : (

The only real difference between this announced poisoning of American citizens and chem trails is that this one is announced "in your face" while the daily chem trails are treated with dead silence.