Internet is Infrastructure for the Police State 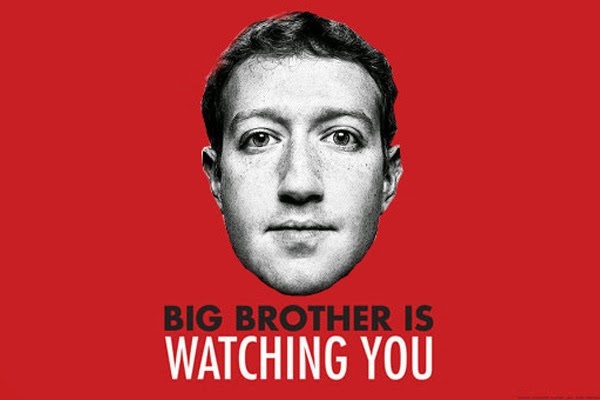 (left, Mark Zuckerborg)
Thanks to the Internet,
they know where you are,
and what you are thinking
every moment of the day.
by Henry Makow Ph.D
The Illuminati agenda is to enslave humanity mentally, spiritually and ultimately physically. The Internet is the ideal tool to identify and monitor every individual. They have begun to punish people who resist dispossession. According to GAB, "Twitter's strict new enforcement rules will be going live on December 18th. Twitter will be judging user behavior both on and OFF of their website. Meaning if you visit another website that they don't like or show "support" for groups they don't like, you can get banned. This unprecedented level of censorship and blacklisting of groups from the public square is unlike anything in history."
REGIMENTING THOUGHT
650 people were arrested in the UK in 2017 for posting something to the Internet that was deemed by the government to be 'offensive'. The homes of 36 people in Germany were raided for the same reason. People are losing their jobs, the hallmark of Communist tyranny.
Once cash is obsolete, it will be easy to cut off the digital bank accounts of recalcitrant individuals.
As Edward Snowden says below, mass surveillance isn't about terrorism, which is usually state sponsored. It is abut social control. The West is already under Communist control. We have entered the era of thought crimes. The way to resist is civil disobedience. Force them to prosecute hundreds of thousands of people. Do not take your loss of freedom lying down.
The Internet is Broken
by Edward Snowden
(Excerpt by henrymakow.com)
This is the reason mass surveillance doesn't work. You don't have to take my word for it, particularly in the context of public communication. You can cite the Privacy and Civil Liberties Oversight Board's review on section 21513, and their specific quotes, this is their words, "We are aware of no instance in which the [mass surveillance] program directly contributed to the discovery of a previously unknown terrorist plot or the disruption of a terrorist attack."
These programs were never about terrorism. They are not effective for terrorism. But they are useful for a lot of other things, like espionage, diplomatic manipulation, and ultimately social control.
Imagine yourself sitting at a desk, and you have a little box that lets you search anybody's email in the world; it lets you pull up their entire web history, anything they've ever typed into a search engine; you can read the message they are typing on Facebook as they do it; you can turn on the webcam on any private home; you can follow where anyone goes through their cell phone at any time. This is obviously an extraordinarily valuable mechanism of influence, of power, of capability.
What it doesn't do, though, is stop terrorist attacks.
And this is one of the fundamental problems of the public debate. The officials who are promoting and desire these capabilities recognize this -- 'Look, it'll give us an advantage in foreign intelligence collection. It'll allow us to compete on a stronger basis in the global economic market.' These are arguments they still might win because people may be OK with that bargain: 'That's fine. I don't care if you spy on foreigners. I don't care if you commit economic espionage as long as it benefits us. I don't care if you are monitoring protestors because I don't agree with protestors.'
But that is a very different argument, and one that is more difficult to win, than saying this will save lives, this will stop terrorism, and this is the solution to our problems.
------
RELATED- Social Media is CIA Tool
Government Collects & Analyses 250 million emails each year
Government agents troll online to divide & confuse
Personal storage devices are rogue CIA beacons
Congress on the Take from Internet Providers

Comments for "Internet is Infrastructure for the Police State"

Hey Henry, in regards to your latest article I think its interesting that some say that in Hebrew www (world wide web abbreviation for websites) is equal to the number of the beast, 666.

Maybe thats the reason the internet is an abject failure; a cesspit of political opinion, hatred, pornography and the ridiculous.
Maybe it was literally spawned from depraved minds in Hell. Who knows?
I think the world has gotten infinitely worse since the advent of this massive network.

I think all our ancestors were infinitely more happy, wise and intelligent than us who have access to infinite information via this internet.
But I guess information and data doesn't equal truth -- thats Gods domain.

Here is a general point taught to me years ago by one of my mentors Andrew Galambos (1924â€“1997): â€œEvery toolâ€” the Internet in this caseâ€” can be used as a weapon.â€

The Internet and crypto-currencies are all being weaponized as we speak.

If and when enough people wake up in America and conclude the truth that the same International self chosen Cabal gang controlled Carter,Reagan,Bush,Clinton,Bush,Obama,and control Trump,only then will we if ever have a second party and a Government of we the non corrupt insider special interest people !

The Elite ruling class know this and keep us divided 7/24 well thru their control of the left and right Media, and the Money !

They divide us up with 1/3 of us constantly being feed fear and becoming scared of everything,

That along with the another 1/3 of us somewhat stupid and not knowing what is going on because of being feed have truths, and not the entire story on purpose that then becomes the incomplete story in our then limited mind and perception !

Last but not least 1/3 of the people would sell their Mother or Father for a buck or a good pay off !

This above is how the international ruling gangster establishment keeps us under their almost total control !

Their end checkmate of Resistance will have been mostly completed and the game of hope for most of us that
understand this dynamic will finally I am sorry to say be over !

They do in fact monitor you: