Men Must Pay Child Support Even When Tricked 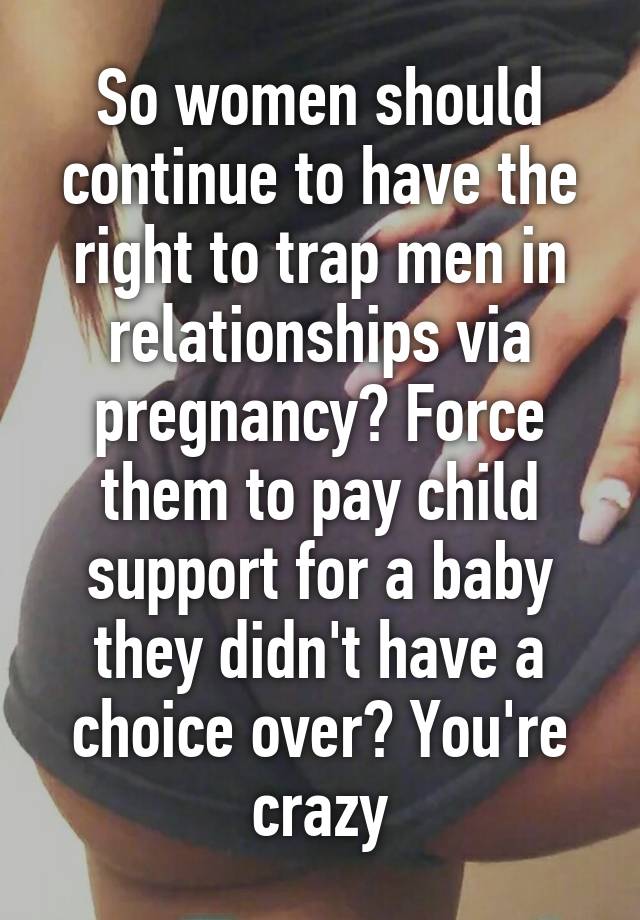 Below, a family lawyer describes how men are forced to pay child support even when the woman claimed she was on the pill.  "You play; you pay," the judge ruled.

This is another reason why "hook up" culture is dangerous for both men and women.

It makes far more sense for men to establish longterm relations with a compatible partner, i.e. marriage. Sex is safer and more readily available in marriage, and the issue of children is usually settled.

The key to a successful marriage is the heterosexual contract: the exchange of female power for male power expressed as love. Find a woman who wants you to be her leader and, every day, make her glad she did. Romantic infatuation or sex attraction are not the best foundation for a long-term relationship. Men should take the time to define their needs, and look for a woman able and willing to fulfill them. In exchange, he must satisfy her needs.

She lied about being on the pill, and now she's pregnant. Do you still have to pay child support?  Man sues woman for misrepresentation.

"She said she was on the pill."

That refrain is often heard by family lawyers from male clients who have been served with an application for child support. Variations include, "She told me she couldn't get pregnant" and "It wasn't my idea -- before I knew it, she was all over me."

Each province and territory has legislation in place that requires the parents of a child to pay child support, no matter how conception occurred.

In 2000, one of Ontario's senior family judges, Justice Steinberg, said: "When parties engage in sexual relations, they are deemed to do so on the understanding that however unlikely and however unanticipated, a pregnancy may result." Two years later, Justice Backhouse of the Ontario Superior Court added: "Relationships involve risk taking. People should be honest but it is well known that frequently they are not."

Unwilling fathers have made many creative claims over the years to try to avoid their child support obligations when parenthood has been thrust upon them. Last year, the Ontario Court of Appeal decided P.P. v. D.D., a case in which a male doctor claimed damages for fraudulent misrepresentation, after being told his partner, D.D., was pregnant. He claimed he had sex with D.D. only after she assured him she was on the pill.

In P.P., the issue was whether P.P.'s claim for fraudulent misrepresentation could proceed. D.D. brought a motion to have the claim "struck without leave to amend," meaning that if the motion succeeded, P.P. could not proceed with his claim at all.

For the purposes of deciding whether a claim can be struck, the court is obliged to assume that the facts set out in the claim are true. P.P.'s statement of claim said that before he and D.D. first had sex, he asked her if she had any condoms. When she said that she did not, he asked if she was "on the pill." She said she was. P.P. and D.D. then continued with their amorous activity, and "had intercourse that included intravaginal ejaculation."

This pattern continued for several months before the relationship ended.

Shortly after the relationship ended, D.D. texted P.P. to tell him that she was pregnant. A predictable (and presumably volatile) discussion ensued, which ended with D.D. confirming she intended to have the baby.

For P.P. to successfully sue D.D. and receive damages for her fraudulent misrepresentation, the Court of Appeal confirmed that P.P. must prove: (1) the representation was made by D.D.; (2) D.D. knew her representation was false; (3) the false statement was material and P.P. was induced to act; and (4) P.P. suffered damages.

The Court of Appeal focussed on whether P.P. had experienced losses that could be compensated for by damages.....

In considering a possible sexual battery claim, Justice Rouleau decided that the dishonesty in P.P.'s case was not with respect to the nature of the sexual act, but only its consequence. The sexual contact was clearly consensual, and P.P. was not physically harmed by it.

While the Court of Appeal concluded its decision by saying that it did not minimize the "legal and moral responsibilities" that P.P. now had, nor did it "condone the alleged conduct" of D.D., P.P.'s claim simply could not succeed.

In short, the law on unwanted fatherhood is clear: If you play, you pay.

Laurie H. Pawlitza is a senior partner in the family law group at Torkin Manes LLP in Toronto.

Comments for "Men Must Pay Child Support Even When Tricked"

And I agree with this. YOU PLAY YOU PAY.
Right on to this. Sex should always between a man and woman who are MARRIED legally in God's eyes to each other.
My folks taught all three of us to do it that way. My brother did not, got his girlfriend pregnant (she did it on purpose), dad made them both get married, and they have been married now for many decades with two more afterwards. MAN UP or do not PLAY!
My younger sister and I waited till we got married before having sex. Much better that way in my opinion. My wife and I are fulfilled to do it GOD's WAY and not MAN's WAY.

Regarding your recent article: Sorry I don't feel sorry for men who are duped by women who 'say' they are on the pill. Men who have sex outside of wedlock are being grossly irresponsible and asking for trouble, whether an unexpected pregnancy or an STD, etc. Promiscuity stunts our development. Fathers need to take responsibility for their sons and raise them to be men. Men who have children out of wedlock due to their own misconduct have a duty and obligation to be accountable for their actions and provide for the financial needs of the child. Us men need to learn to be accountable for our actions once more and to stop deflecting the blame on women, the media, politicians, etc. Women, outside of a faithful and committed marriage (whose head is Christ), cannot be trusted: