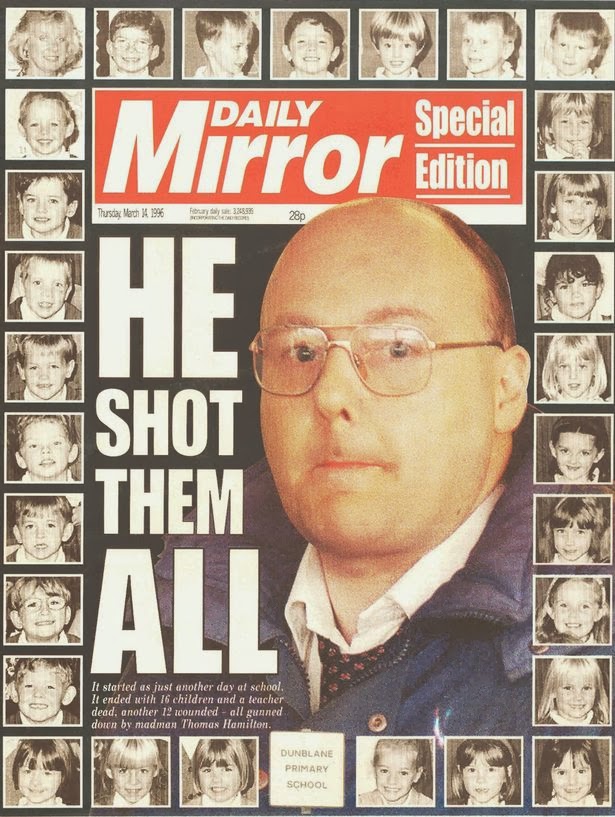 The Dunblane school massacre took place at Dunblane Primary School near Stirling, Stirlingshire, Scotland, on 13 March 1996, when Thomas Hamilton killed 16 children and one teacher before killing himself. It remains the deadliest mass shooting in British history.

Public debate about the killings centred on gun control laws, including public petitions calling for a ban on private ownership of handguns and an official inquiry, which produced the 1996 Cullen Reports. In response to this debate, two new Firearms Acts were passed, which outlawed private ownership of most handguns in Great Britain.

Ryan M reminds us of this and the Port Arthur false flag, which puts the most recent Masonic Jewish (Illuminati, Communist) attempt to disarm Americans in context.

On March 13th, 1996 in Dunblane, Scotland a shooter entered the Dunblane Primary School and murdered 16 children and their teacher. It remains the worst school shooting in the UK to this day. Many researchers believe that the false flag event at the Sandy Hook Elementary School in 2012 in Newtown, Connecticut was based on the real-life tragedy in Dunblane in 1996.

Just over a month later, on April 28, 1996, in Australia, another mass shooting occurred. This time 35 people were killed and 23 wounded in a former prison colony and popular tourist site in Port Arthur, Tasmania. Martin Bryant was charged with the killings.

Not surprisingly, strict gun control measures were enacted after both events. In 1997, all handguns were banned in the UK. In Australia, a massive overhaul took place restricting the private ownership of semi-automatic rifles, semi-automatic shotguns, and pump-action shotguns as well as introducing uniform firearms licensing. 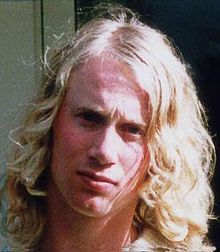 Many people believe that Martin Bryant, left, was a patsy used to bring in sweeping gun reform. According to Dr. Keith Allan Noble Ph.D., the author of "Mass Murder: Martin Bryant Case Re-Examined," Martin was born handicapped with a very low IQ of 66.

Dr. Noble further said of Bryant "Tests reveal his mental age is 10 years or less. It is inconceivable he did all the planning and arranging, then did all the shooting. The only eyewitness who knew him said, Martin was NOT the gunman. Other eyewitnesses confirm this fact. Research reveals evidence against Martin was faked. He is the patsy - someone set up and misused, then officially blamed."

It was also pointed out that the shooter was right-handed, while Martin Bryant was left handed.  In 2015, a petition was started to properly examine Martin's case and free him from prison. As of today, Martin Bryant continues to serve his 35 consecutive life sentences in the hospital ward at Hobart's Risdon Prison in Tasmania.

DUNBLANE COVER-UP
Conspiracy researcher, David Icke believes that the Dunblane massacre was actually an enormous cover-up to protect a massive pedophile ring.
According to Icke, Thomas Hamilton, the Dunblane killer was a "Jimmy Saville figure" who " was seen walking around the school dormitories at night" and used the school to "procure children for the rich and famous." Thomas Hamilton was said to have killed himself after the shooting, but many have questioned the official story as Thomas Hamilton was found with not one, but two bullet holes exiting his head. Many of the documents related to the investigation were put under a 100-year secrecy ban because Hamilton had a connection to senior members of the Scottish establishment through Freemasonry. This would support Icke's view. However, there are claims that, as with Sandy Hook, the Dunblane massacre was faked.

It looks as if Hamilton was executed because he had become a liability in his role of procurer of children for elite pedophiles including Lord George Robertson. He was apparently agitated at being accused of being kinky and was writing letters to extenuate himself. There are multiple problems with the Port Arthur Massacre story, including the right-handed shooting from the hip to the heads of the victims, a highly advanced skill. Gunman wearing balaclava, so no reason to believe it was Bryant. He never confessed. In both Australia and the UK the gun confiscations were a roaring success, which the gangsters have attempted to replicate in the US.

People have got to realize the main purpose of this "drill w/no one killed" was to deepen the divide among the American people. The scum pushing this agenda know the gun control propaganda being pushed by the Demorats and the Slime Stream Media will only enrage law-abiding gun owners and drive them further into the open arms of the gun salesman. This short clip of the massive attendance of a Florida gun show makes it clear real Americans are not about to "turn'em in". https://www.theburningplatform.com/2018/02/25/not-shocking-floridians-respond-to-parkland-shooting-by-buying-more-guns/?utm_source=dlvr.it&utm_medium=twitter

The "true leaders" are pushing for "civil war 2.0", the one that will finally see our constitution laid to waste along with our very country itself. The Satanic NWO is right around the corner, but before it can be rung in, America must burn and Marshal declared.

You Trumptards must awaken to the fact that "the Donald" has already turned his back and walked away from you. He will continue to do so in the coming days.

You mouth breathing liberals who think confiscating guns from law abiding citizens will solve everything will soon enough find out what the heavy boot of the Tyrant feels like as it chokes out your last breath of freedom.

We as a country either wise up to the tyrant's little scheme or we are finished. As "Wil of the Wisp" states in "Last Light Radio" - "This time they've divided us so they can conquer us".
https://www.youtube.com/watch?v=04KbVlRLdvM&index=18&list=PL6_YHx4-reSh5kTDRgqvEebkln-yTF0dN

Very interesting about the Dunblane pedophile ring connection. In regards to Port Arthur, I just wanted to make you aware of the book by Joe Vialls (ex Israeli, now deceased - Ari Ben Menashe) that goes in great detail on what happened, why it wasn't Bryant, and how the operation may have been done in regards to Bryant (who was arrested at the nearby Seascape Cottage) http://www.whale.to/b/viallspam.html
There has been speculation that Joe Vialls was actually at the scene, and that's why he knew so much.