Another False Flag Shooting in Florida? 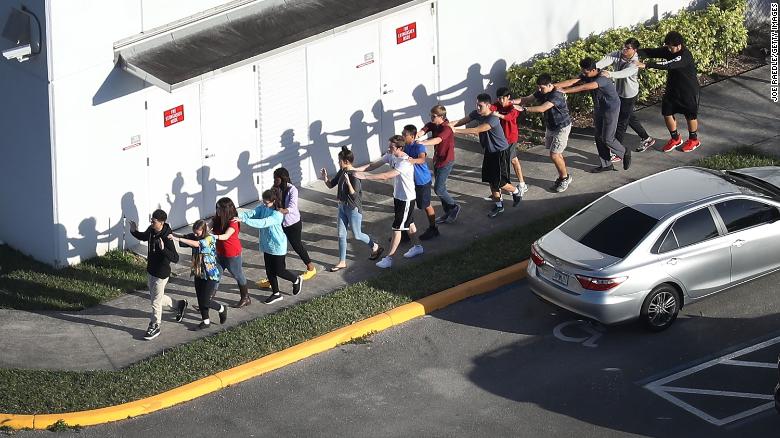 (left, you know it's a drill when they do this.)

Merit Freeman lists the reasons he believes this

is another psyop initiated by the Deep State

to disarm the American people.

"I nailed it and hit a nerve. No matter what you type into Google, it will not bring up the story. You can search for the URL, exact quotes, keywords, names, anything you want. Google refuses to display it as a result. It's fucking black-balled.  I called in to 'Coast To Coast A.M.' to talk about the event, and they cut me off after I said the words 'False Flag.'" - Freeman

Latest    ---   Cops told not to enter school unless they were the shooters.    Shows shooters exiting.

The incident at Marjory Stoneman Douglas High School in Parkland, Florida on February 14th, 2018 was a false flag event, designed to foment a fascist gun grab. 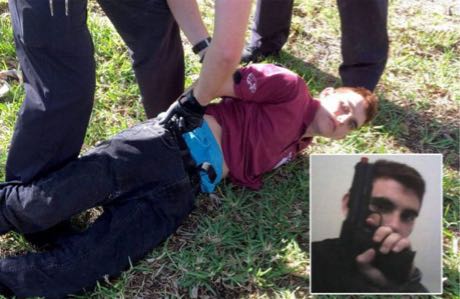 The official narrative states that 19-year old NIKOLAS DE JESUS CRUZ, a student who had been kicked out of the school, entered the facility, set off smoke grenades, pulled the fire alarm and opened fire on students and teachers with a .223 caliber-15 rifle as they tried to evacuate the building, killing 17 people and wounding numerous others.

This incident has all the markings of a government-sponsored false flag event:

â–º The story was posted by news outlets days ahead of time. (See below)

â–º There was an Emergency Response training drill happening that day in the county adjacent to the incident. This is the "smoking gun" in my opinion. There was also a drill at the school.

â–º Eye-witnesses reported multiple shooters, yet only one "gunman" was arrested.

â–º Crisis actors were on the scene to give interviews.

A "mom" claiming to have been in the 2017 Fort Lauderdale, Florida airport shooting now says that her "kids" were part of this shooting. A family who false flags together, stays together.

â–º Confusion and misdirection pertaining to the identity of the shooter/patsy were rampant. 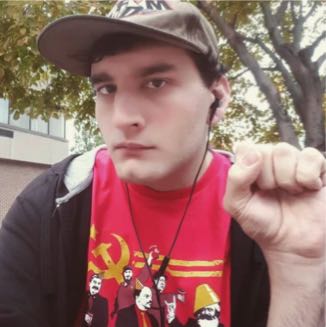 A picture and biography of a person unconnected with the shooting were immediately spread across the internet and news sources, as a picture from MARCEL FONTAINE's Facebook page was hijacked and passed off as the shooter. (Since scrubbed. Screenshot below.) 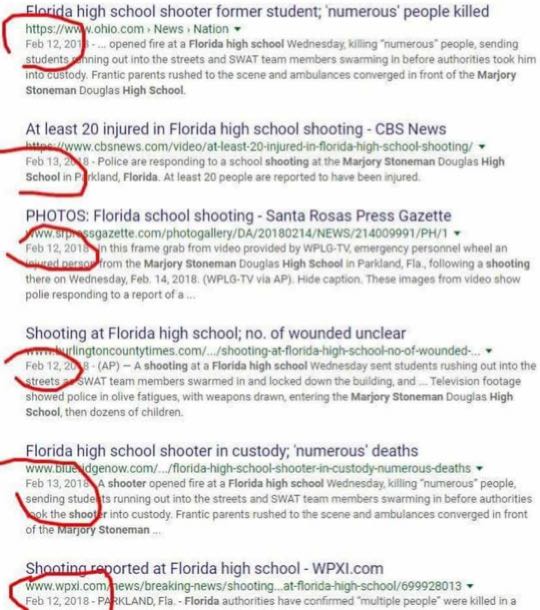 Mother of Crisis Actor in link below is Democrat Activist, CNN Employee

Great post. A rapid breakdown of the event. In addition to the shooter being named "Jesus" and "Cross," the media is reporting that he was "obsessed with guns" and that his Instagram picture features a MAGA hat! In short, the shooting was done by Jesus, the NRA, and Trump--everyone the left-wing Zionist MSM wants you to hate.

Similarly, you will recall that in January the media reported on two California parents who allegedly ran their home as a "house of horrors," keeping 13 kids (yes, 13) chained to beds. The media described the parents as "Christian homeschoolers" who were forcing the children to memorize Bible verses. Sounds like they're hiring B-movie scriptwriters to paint Christians as clichÃ© villains in "Wag the Dog" screenplays sold as "news."

Glen writes-
I heard of this, yet another "Capstone Event" while I was getting ready to leave work on the eve of the 14th. I thought to myself, what a great day for another false flag event. St. Valentines day and Ash Wednesday all rolled into one.
The next morning when I returned to work, not a word of any of this was spoken by anyone. I am not saying everyone has wised up to the almost daily barrage of B. S. we are bombarded with, I am saying the short attention span of my fellow Americans will prove to be the death of these events. Americans have become numb to these contrived shootings, the shine has worn off of the new propaganda toy.
The funny thing about this is no one, I mean no one I know is more inclined to give up their guns. In fact they are more determined than ever to stock up on guns and ammo. It is my belief that these little events have had the opposite affect they were intended to have.
Selfie Taken at Crisis Actor Bootcamp 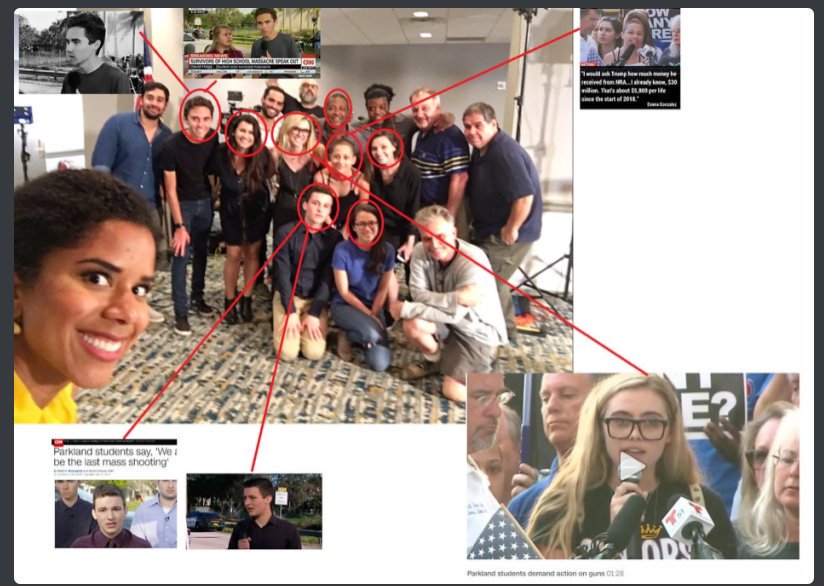 Comments for "Another False Flag Shooting in Florida? "

You have taught me a lot. Would like to learn more regarding who controls the Zionists who in turn control the U.S. Fascinating subject.

Hard to get people to understand that their nation has been completely hi-jacked and subjugated. They still watch the stupid box and they still think that Faux news is telling them truth. It is indeed frustrating because I have literally no one to have a meaningful discussion about this since everyone is asleep in the matrix. Especially hard to keep my mouth shut regarding these pathetic staged shootings. This nation has lost all of my respect. It is disgusting what these soulless people are doing to the duped masses.

This latest fiasco is what got me bounced out of JewTube permanently. There is zero tolerance abroad for any dissenting views against the hysteria promulgated by the government and their shill media networks.

Even with video evidence testifying against this obvious false flag, the brain-dead wish to hang onto lies. This society is an example of Battered Housewife Syndrome. They will not believe that they are pawns in a very large chess game involving their freedom.

I believe that the PTB (Powers That Be) no longer care about the gross discrepancies that always attend events of this nature. They know that the public has been largely dumb-downed beyond recovery. How does one fight against such hopeless odds?

â€œI nailed it and hit a nerve. No matter what you type into Google, it will not bring up the story. You can search for the URL, exact quotes, keywords, names, anything you want. Google refuses to display it as a result. It's fucking black-balled. We nailed this one Henry, and we did it quick and to the heart! I called in to 'Coast To Coast A.M.' to talk about the event, and they cut me off after I said the words 'False Flag.'â€ - Freeman

Quick comment here, I did as Henry suggested and switched my search engine to DuckDuckGo. This is what you get when you type in "Florida false flag Henry Makow"
https://duckduckgo.com/?q=florida+false+flag+henry+makow&atb=v101-4_g&ia=web

Nickolas does not translate to CONQUERER of the PEOPLE.

In Greek the name is spelled NIKOLAOS which can be split in two: Niko-Laos. Niko translated means victory, whereas Laos means People.

And so you have VICTORY OF THE PEOPLE.

This most definetly looks like a false flag opp once again attacking the 2nd amendment.

As Mr. Perloff points out here in his comment the guilt by association factor is a major part of the MSM'S scheme to turn the hate for this horrific act towards gun owners, Trump supporters, and the religious right wing.
I still have doubts about the circumstances and details of this tragedy.

Prior to 911, the big lie, these mass shootings in America happened maybe once every few years. And, like the shootings at Columbine High School, they had no political agenda behind them. Oklahoma City was a false flag gone bad. President Clinton did not take the bait on which would later be the 'War on Terror' that followed 911. These mass shootings today are happening every other month it seems.

And just like all the others since 911 this will go down the memory hole till the next comes along.