Nobody Died at Sandy Hook 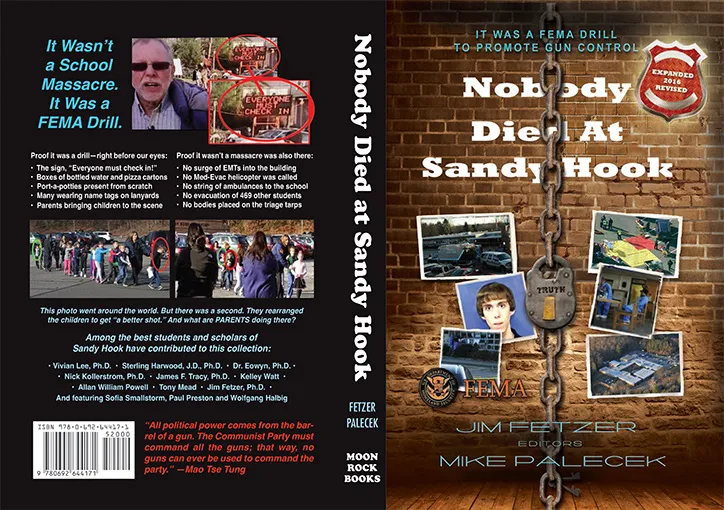 (Amazon made a lame excuse to ban this book)
Sandy Hook was a FEMA drill designed
to promote the NWO agenda. (Gun control, enslavement)
How long is the public going to tolerate
treason by their elected officials and media?


"Among its revelations is the discovery of the 21-page FEMA manual for the drill, with a rehearsal taking place on 13 December 2012, going LIVE on the 14th."
This book is available for download here.

What was widely reported as a school massacre in which 20 children and six adults were murdered by a young man named "Adam Lanza" was a FEMA drill to promote gun control, where no one died, as even officials in the Department of Education have acknowledged to a LA school safety expert.
Those are the stunning findings of a dozen experts who have been investigating the event for the past three years, whose research appears in a new book NOBODY DIED AT SANDY HOOK, with massive documentation and  extensive proof.

The contributors include six (former or current) professors and six other experts, including an Australian who received a leak of an enormous set of photographs documenting the hoax. They leave no room to doubt that this was an elaborate hoax to promote a political agenda.
One of the chapters presents a series of 50 photographs that record the furnishing of the Lanza home to serve as a prop, including the bed in which Adam's mother was allegedly killed, which has (what appears to be) a smear of raspberry jam (not blood) and where, in their haste, a moving pad was left under one of its legs.
Another includes a sequence of 50 more photos that record the refurbishing of the school--which was closed by 2008 because it was loaded with asbestos and other bio-hazards--including the moving vans, classroom name-plates with the mover's name tag still on them, and an early morning sequence of preparing the scene. 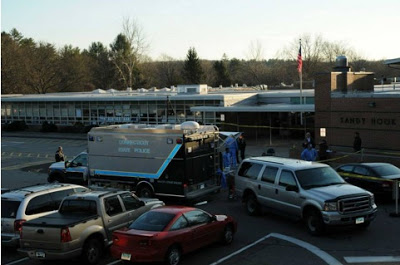 The most astonishing shows the SWAT team already present, where just above the vehicle, windows of Classroom 10 (later shown to be shot out) are undamaged, the flag is at full mast, crime scene tape is in place, and Dr. Warne Carver, Medical Examiner, with arms crossed, awaits the arrival of his portable mortuary tent.
In other photos, you can see the perps drilling holes in one of the windows of the classroom to simulate bullet holes, which are at exact 90* angles and perfectly parallel. Another from inside the classroom shows the aluminum splayed out into the classroom, opposite what would have been the case had they been real.
The editor has published a video introduction to the book on YouTube, including these photographs, under the title, "NOBODY DIED AT SANDY HOOK with Jim Fetzer". Among its revelations is the discovery of the 21-page FEMA manual for the drill, with a rehearsal taking place on 13 December 2012, going LIVE on the 14th.

The manual appears as an appendix to the book and explains why there was a sign, "Everyone must check in!", bottled water and pizza cartons, Port-a-Potties on site, many wearing name tags on lanyards and parents bringing children to the scene, which makes sense for a rehearsal but not for an actual child-shooting massacre.
Anomalies that have bothered many students--no surge of EMTs into the building, no string of ambulances to rush bodies to hospitals, no Med-Evac helicopters, no evacuation of 469 students, no bodies on the triage tarps--are now explicable. None of that happened because no children had been shot. Cars in the lot were even wrongly pointed facing the school, because it was easier to load them for the drill. 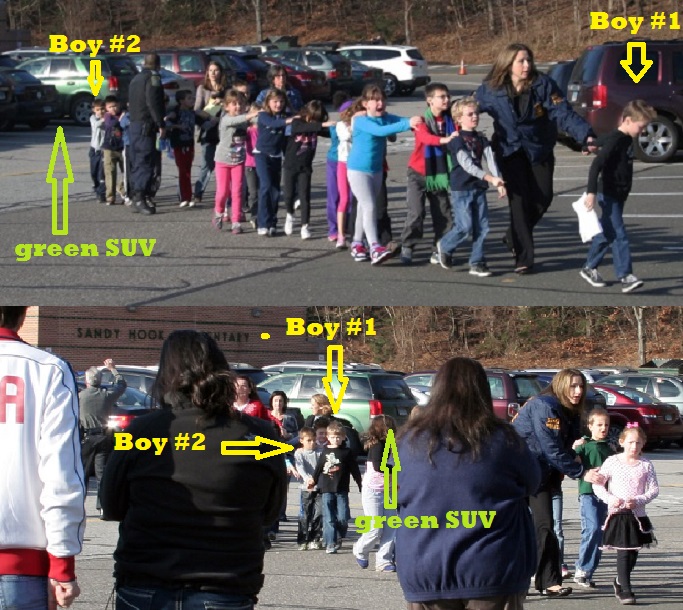 The "iconic" photograph that shows a string of 15 students being led to safety by a policewoman, which was sent around the world at the time, turns out to have been staged. There is a second photograph showing a group of parents casually looking on with their arms crossed as the officer rearranges the kids to get "a better shot".
Newtown Bee photographer Shannon Hicks has admitted taking both photographs, but has yet to explain how parents could have been present for photos taken during an emergency evacuation. Someone would have had to take time out from coping with the catastrophe to call them to come down to the massacre, which is absurd.
This elaborate hoax appears to have been planned long in advance, where Attorney General Eric Holder met with Connecticut Governor Dan Malloy on 27 November 2012 to discuss the administration's programs for gun control. And, on 16 January 2013, Barack Obama signed 23 Executive Orders to restrict the right to bear arms.
-------------James Fetzer has published 31 books, including And I Suppose we Didn't go to the moon, either? (2015), The Place of Probability in Science (2010) and The Evolution of Intelligence (2005).
Related- Shady Figures in the Parkland Charade   (YouTube)
-----------Fetzer on Parkland Shooting
---------- Fetzer is interviewed on Valentine's Day Massacre
-----------Fetzer on Richie Allan. The show that made YouTube take down his channel.
Interview with Fetzer about the banning of his Sandy Hoax book-
Documentary- We Need to talk About Sandy Hook
Makow - Sandy Hook Exposes a Deeply Subverted Nation (about this doc)

Comments for "Nobody Died at Sandy Hook"

I read the whole book (censored by Amazon), and
it's very truthful. Now I'm wondering about Las Vegas
and Florida (etc.). If there were any dead bodies in those places (haven't seen any dead bodies or blood), it surely wasn't done by the patsies!

Its like giving a child a puzzle game. It keeps them busy and when they finish it they go, "Look mummy! I worked out the puzzle!" Mummy then gives the child another puzzle game to play with. She then gets to cook dinner in peace.

Over 45 years ago they killed Kennedy and people knew pretty quickly what went on. Now, everyboy knows - but nothing has changed.

Nothing changes - on a fundamental level. Though I'm sure there are "potentials" forming.

They have us "mapped" Henry. They have never had so much information. Its like the forensic psychologists in the prison system - its a prized post as the opportunities to "study the rats" in an enclosed environment are endless. Now the whole planet is a prison.

Social networking tools allow "them" to study us down to the 'nth' degree. They can "input" information on the TV, social media apps and watch the result and map it in real time. They were caught doing this on Facebook. Until you understand Social Network Science you will not understand the implications for what they are doing.

Henry, those HUGE "data centers" are not for the NSA to map terrorist activities. They are inputting that data into MASSIVELY parallel super computers to predict human behavior.

I do believe Michael Hoffman has talked about this "revelation of the method" in one of his books.

Thank you for the excellent post on SH. I bought the book before Amazon pulled it. I showed it to a few people and their jaws dropped open in disbelief. They couldn't conceive of such an operation being a hoax. However, when Amazon pulled the book they all became immediately suspicious.

I applaud James Fetzer and his co-writers for creating such a monumental work.

When the actual event took place, I was at my computer and the TV was on. I distinctly recall hearing that they had TWO shooters IN CUSTODY. Now, in a fast moving emergency situation, many numbers change and details are scattered, but the number of gunmen IN CUSTODY doesn't vary in these circumstances, at least they never have in any other situation I've seen previously.

If you've seen the all the documented evidence online about Sandy Hook, you know it's mind boggling. Anybody who trusts the media at this point really has some deeper psychological issue. God help them.

Not to pat myself on the back but me and a friend of mine who follows the alternative media were at a coffee shop when we first heard the news of Sandy Hook. I told him immediately that it was a fraud. Sorry, but the "lone crazed white gunman" suspect is always the give away in "front page" ads like this for gun control. The culprit must always fit the MSM perpetuated mythical stereotype of one who would do such a thing like this.

Mr. Fetzer has spent countless hours on this false flag hoax and has proven his case very well. He even was actually opposed by some in the alternative media who's personal egos would not and still cannot yield to the truth about this sham.

The number of people who must be collaborating in such a hoax as this (and 911) is absolutely staggering and the grandness of this hoax is absolutely how they hide it right out in plain view. The more audacious the actual real story becomes the more unbelievable it is and easy to dismiss by folks with lazy, uninquiring minds and they (the perpetrators) are counting on this and it is working. The reaction of the gun culture is to simply buy more guns and amo knowing very well who their real enemies are and O bemoans the fact he hasn't been unable to get our guns since being president........ha!