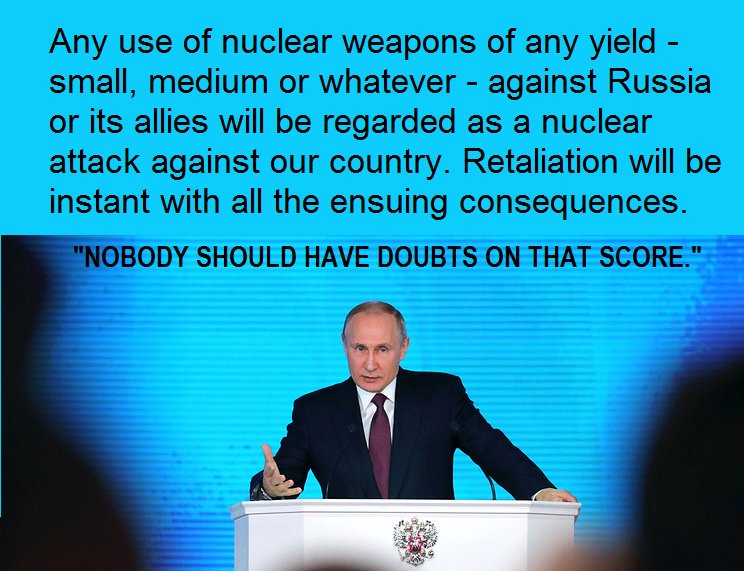 (Read this in context of recent US loosening US constraints on the use of nuclear weapons.)
In his March 1 speech, Putin issues a warning to the West. We have new weapons that can blow you away. Don't mess with us.
Even with his anti-globalist pretenses, Trump and the West
are proxies for the Rothschild NWO.
The US is creeping up Russia's ass in the Baltic and Ukraine, and doing Israel's bidding in Syria.  US warships patrol the Black Sea. No other country would tolerate these provocations. Inevitably there will be a confrontation with Russia.
One commentator says Putin is "playing poker with an idiot." But could this idiot actually want a nuclear war? Cabalist dogma suggests he does.
Trump is a known Cabalist (Freemason) who campaigned on a promise to defuse tensions with Russia and eschew gratuitous wars like Syria. His supporters don't call him on his betrayal, while his opponents support it.
Our mainstream media now is as controlled than in Nazi Germany or the USSR. Cabalists create a solipsistic reality and draw the unsuspecting sheeple into it. They ignore Russia's warnings.  As Willy B details below, Putin is pleading with the US to use common sense. But war is a boondoggle in the US. A rude awakening may be in store.
Putin: Listen to Russia Now
by Willy B
(henrymakow.com)
Rusian President Vladimir Putin delivered his State of the Nation Address to the Federal Assembly March 1 and while his lengthy remarks covered the gamut of policy issues in Russia, it was his remarks on nuclear policy and weapons that garnered headlines around the world.

"I believe it as my duty to say this: any use of nuclear weapons of any yield - small, medium or whatever - against Russia or its allies will be regarded as a nuclear attack against our country. Retaliation will be instant with all the ensuing consequences," Putin said to draw loud applause from the audience. He warned that "nobody should have any doubts on that score." At the same time Putin cautioned against creating new threats to the world, "but on the contrary to come to the negotiating table to give thought to an updated, future system of international security and the civilization's sustainable development."

Though the new weapons that Putin described were not a response to the U.S. Nuclear Posture Review, released last month, he directly attack aspects of that document. "Some of the provisions of the updated US nuclear strategy review, which reduces the threshold for using nuclear weapons, trigger tremendous concern. One can try to calm down anyone behind the scenes as one chooses, but we read what has been written. It is written in such a way that it can be used in response to a conventional weapon strike or even in response to a cyberthreat," Putin noted. He stated that in its military doctrine, Russia "reserves the right to use nuclear weapons only in response to the use of nuclear and other types of weapons of mass destruction against it or its allies or in the event of aggression with the use of conventional weapons, when the very existence of the state is jeopardized."

Then Putin went on to describe a number of new systems that Russia has had under development, systems, with one exception, that have not been previously officially described. He stressed, however, that these new systems were a response to the 2002 U.S. unilateral withdrawal from the ABM treaty of 1972 and the subsequent deployment of U.S. missile defense systems both inside and outside of the U.S. he said that all of Russia's suggestions on joint work have been rejected by the US, explaining that Moscow has tried to convince Washington not to violate the anti-missile defense treaty, but all this has been in vain. According to Putin, the US military build-up will eventually render Russia's nuclear arsenal pointless unless Moscow acts, specifying that all agreements under the New Start Treaty are gradually being undermined and devalued. 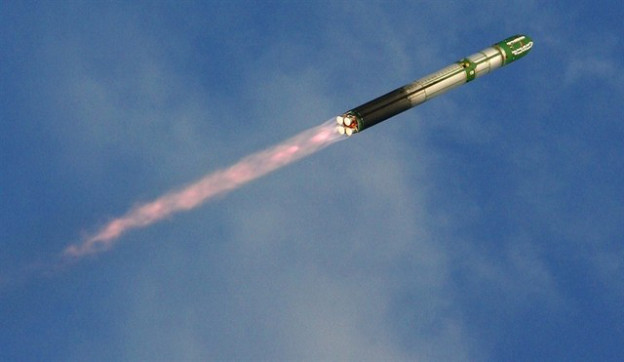 Putin explained that Russia has started the development of weapons that do not use ballistic flight paths, "which means that the missile defense systems are useless in the struggle against them." In late 2017, he said, Russia successfully tested a completely new type of armament "unmatched in the world" -- a nuclear-powered missile, with virtually unlimited range that can, therefore, attack from any direction. He also announced that the beginning of the active phase of testing of the RS-28 Sarmat heavy, liquid fueled ICBM, saying that it would be invulnerable to interception as its capabilities allow it to bypass any missile defense. In addition, Moscow has developed underwater drones capable of operating at enormous depths and intercontinental distances, as well as creating hypersonic weapons.

"No one listened to Russia before we created new armament systems, so listen to Russia now," Putin said (emphasis added), saying that the country is one step ahead of other states.

The response from the Pentagon, so far, has been to say that these weapons are not a threat and that US missile defense is not aimed at Russia. "We're not surprised by the statement [by Putin], and the American people should rest assured that we're fully prepared" to defend against attack, Dana White, the Pentagon's chief spokesperson, said at a briefing, yesterday afternoon. "We're prepared to defend this nation no matter what" Putin might add to his arsenal of nuclear weapons."

While the Pentagon dismisses these new weapons, and even questions their viability, some experts are more serious. "I'm still kind of in shock," Edward Geist, a researcher specializing in Russia at the Rand Corp, told NPR in reference to the nuclear-powered cruise missile. "My guess is they're not bluffing, that they've flight-tested this thing. But that's incredible."

Experts consulted by The National Interest's Dave Majumdar, including Russian nuclear expert Pavel Podvig and Micheal Kofman of the Center for Naval Analysis have little doubt that the systems described by Putin are viable. "They apparently tested all that Putin showed, so it is all feasible," Podvig said "Whether these things would make sense is another matter. I don't think any of these are really necessary if we are talking about countering missile defense." Kofman agreed that all of the systems are feasible and real. "Most of this is reality, it's just a question of near or distant reality," Kofman said.

Makow comment -We must ask ourselves. Is a country that stages and condones phony terror attacks on its own citizens in order to disarm them even worth saving?  No one in the mainstream even questions the bona fides of the Parkland attack even though it coincided with yet another drill, the hallmark of a false flag. As with the cover-up of the assassination of JFK and 9-11, the US political elite has no moral legitimacy, and any country that tolerates them is not worth saving.

"Nobody wanted to discuss the fundamental problems with us", Putin said today. "Nobody listened to us. Now you will have to listen!

"To those who for the last 15 years have been trying to provoke an arms race, achieve one-sided superiority over Russia, impose illegal sanctions...I will say this: You now have to acknowledge reality realize that everything I said is no bluff. Take some time to consider. Stop jeopardizing this ship we all sail in - which is called planet Earth.
Is anyone going to listen this time? Is anyone even able to hear? Judging by the zombified corporate media coverage so far - the answer is no.
In this, he is essentially a man playing poker with an idiot. For the past few years, he has has been saying to Uncle Sam, smirking over his useless cards - "look, you are fatally misjudging, we won't fold because we can't. Stop bluffing before you bluff yourself into starting a fight no one can win." Remember this address to the press in 2016?
http://www.thetruthseeker.co.uk/?p=166593
------
"But we have not yet reached the required level in the context of accomplishing our highly important task and guaranteeing people's quality of life and prosperity. But we must do this, and we will do this.
In this connection, I would like to note the following. We are greatly concerned by certain provisions of the revised nuclear posture review, which expand the opportunities for reducing and reduce the threshold for the use of nuclear arms. Behind closed doors, one may say anything to calm down anyone, but we read what is written. And what is written is that this strategy can be put into action in response to conventional arms attacks and even to a cyber-threat.
I should note that our military doctrine says Russia reserves the right to use nuclear weapons solely in response to a nuclear attack, or an attack with other weapons of mass destruction against the country or its allies, or an act of aggression against us with the use of conventional weapons that threaten the very existence of the state. This all is very clear and specific.
As such, I see it is my duty to announce the following. Any use of nuclear weapons against Russia or its allies, weapons of short, medium or any range at all, will be considered as a nuclear attack on this country. Retaliation will be immediate, with all the attendant consequences.
There should be no doubt about this whatsoever. There is no need to create more threats to the world. Instead, let us sit down at the negotiating table and devise together a new and relevant system of international security and sustainable development for human civilisation. We have been saying this all along. All these proposals are still valid. Russia is ready for this."
https://russia-insider.com/en/putins-remarkable-historic-march-1-speech-moscow-video-excerpts-full-transcript/ri22667

You cannot defend a nation that is eating itself from the inside out.

I think most non-specialists are missing the point about the so-called anti-ballistic missile screen massed around Russia. What any specialist knows is that you cannot tell simply by looking at a missile what its actual capabilities may be. To take an old example that is now totally unclassified, consider the Nike missile series. They were billed as being anti-aircraft. They did indeed have that capability. But they could also be fired in a surface-to-surface mode that was nuclear. The naive allies of the United States have allowed the stationing of alleged anti-missile missiles on their territory that could very well be used in a surface-to-surface mode with nuclear weapons, thus inviting a Russian response on the hosting countries rather than the US itself. Such posting in allied countries also reduces the flight time of the missiles with their possible nuclear payloads, thus dealing what would be intended to be a decisive blow against Russia before it had time to react, thus making any Russian response meaningless. Putin is not spelling this out, but all specialists know why he is so concerned about missile systems with a supposedly defensive purpose.

Ironically it Hillary Clinton who gave the Russian the technology what a coincidence, now both China and Russia have hyper-sonic ICBM with nuclear capabilities while the US is supposedly behind on hyper-sonic platforms. Considering NATO has surrounded Russia with missiles it was time for Putin to show his hand.

i remember like it was yesterday the day after 9/11 when President Bush suddenly became loquacious as he became the War President instead of the bumbling fool who could not string two sentences together prior to 9/11. He looked like the pointed ears Devil himself behind his podium and i remarked listening to his remarks that he wanted to destroy America...and today those same neo-con backers still do...damn the people they want WAR!

RE: statement by Putin shows he is a stooge