Cops Were Possible Shooters in Parkland 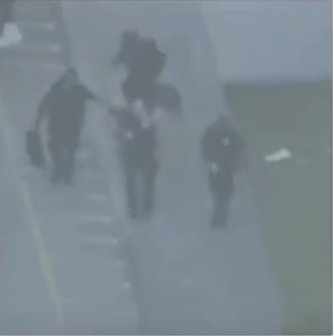 Erick made a video compilation of evidence of

It has since been removed.  Here is his transcript

may actually be the shooters.

The bag was apparently so heavy it took two officers to carry it.

A third officer can be seen lowering the tailgate on what looks like a White Late Model Ford 4 Door (crew cab) pickup truck with a 6 foot bed; again, apparently because the other two officers (carrying the bag) could not just simply lift the heavy bag over the side and throw it in the back bed of the truck.

Note, This is evidence of officers tampering with a crime scene and evidence at one of the biggest crimes of the decade, with national / international significance.

These officers faces can be clearly seen on the video. 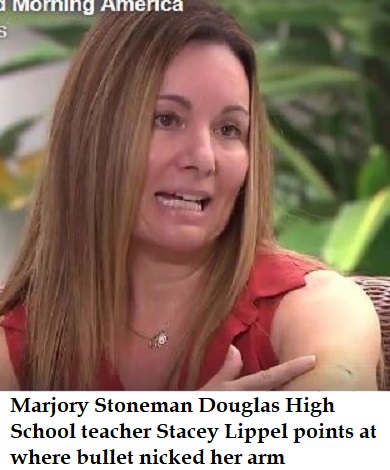 Stacey Lippel teacher: " I suddenly saw the shooter about 20 feet from me.

Standing in the hall way, actively shooting down the hallway, just a barrage of bullets.

And I'm staring at him thinking... Why is the police here?

I thought it was a joke.

He must not be... cause they told us like they were going to have a fake... and you know have people taken away and have them scream or whatever...

A. Student, Girl shakes her head yes, then says: "Like a drill... but I just figured it was that but it was so real... I could hear his voice..." 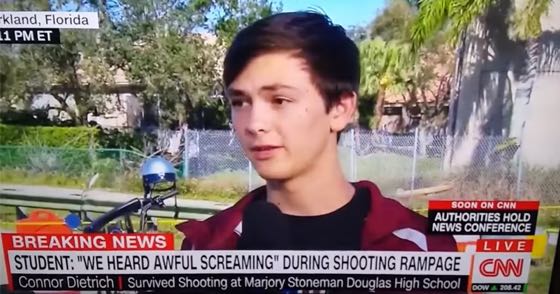 Student, Connor Dietrich: "I heard shots... I thought it was a drill, because they told us they were going to have police officers firing blanks scare us, getting us trained for this... no one took it seriously when I heard screaming... the worst screaming you will ever hear... it was awful like..."

Student, girl: "...that's when because the other shooter was coming up..."

Q: "So you think there was more than one shooter?"

I saw some other kids going down the other way then stopping because the other shooter was coming."

"They told us about a drill before where they were going to be shooting blanks."

Senior student, Alexa Miednik: "After coming out of the bathroom... as I was going down the stairs I heard a couple of shots fired, everyone was freekin out, saying that it was a gun. 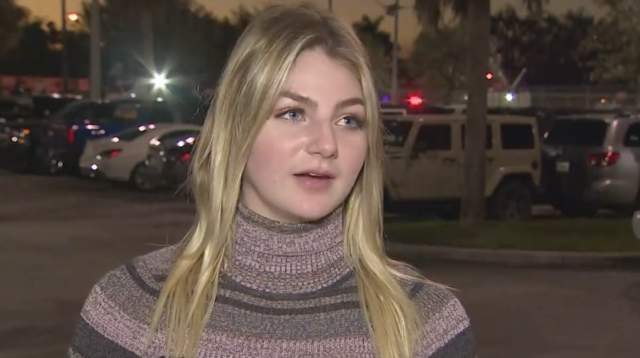 (Alexa Miednik--"I was talking to Cruz and shots were coming from another part of the building." Reports that this woman is a plant as well. Strange she would be cotradicting the official story.)

And um as we were walking, the whole class together,

I actually was speaking to the

[she puts her fingers up, as to put her statement in quotation marks]

"suspect' Nicholas Cruz, and as I was speaking to him, he seemed very...

I don't know what the word I want to say is.

[perhaps... it seems... Cruz did not know what was coming down / meaning perhaps he was not part of the shooting]

But um... he was trouble in middle school, so I kind of joked about it and said:

I'm surprised you weren't the one who did it."

[Why would she "joke" and say she was surprised he was

"not the one who did it"

He apparently did not have a gun.]

So ah that's really what happened."

You were walking down the hall.

He had already fired at that time.

[Notice how the interviewer uses a leading question, making a statement:

"He had already fired at that time."

Senior Student, Alexa Miednik did not say that.]

A: Senior Student, Alexa Miednik: "Yes sir it was him."

"Yes" she was positively walking and talking to Nicolas Cruz.

A: Senior Student, Alexa Miednik: "In the moment, I wasn't.

Because there was obviously, there was definitely another shooter involved."

Q: Interviewer: "Oh you think he was not the "only" one?"

[again, Senior Student, Alexa Miednik did not say he was "the one" she actually said:

she "was surprised it wasn't him."

A: Senior Student Alexa Miednik: "No. Definitely not."

Q: Interviewer: "Why do you say that?"

A: Senior Student Alexa Miednik: "Um... Because when shots were fired, I saw him after the fact.

So... And the shots were coming from the other part of the building.

So there definitely had to be two shooters involved.

Comments for "Cops Were Possible Shooters in Parkland"

I think, like many issues, the interest is in keeping the issue itself alive as long as possible. Just to occupy the political/intellectual space.

It functions like this: keep the gun laws too loose, deliberately, so there's always something to complain about. Keep the background check system pathetic, so there's more to complain about. And then scare the pro-gun population by telling them the 2nd amendment is in jeopardy and "they're going to take your guns" - which is clearly fear-mongering. They'll never get rid of the 2nd amendment, and all the armies on earth couldn't collect the hundreds of millions of guns floating around the US.

he truly crazy thing to believe is that every once in a while some disgruntled high-schooler decides to get a gun and shoot a bunch of his classmates. Only in the USA. Maybe if they put more fluoride in the water everyone would believe it.

â€œHere is his transcript which contains evidence that Sheriff Israel's men may actually be the shooters.â€ (Well done, they all, i.e. future ones, need to be captured on Vimeo as we now know that Google and Youtube are wiping out evidence soon after it goes on the net.)

Henry, letâ€™s say the shooters ACTUALLY ARE Sheriff Israelâ€™s men, given Yoichi Shimatsuâ€™s article(s) on Sheriff â€œIsraelâ€ and the terrorist / paramilitary / vigilante and infiltration groups operating inside America, against the well being of Americaâ€™s own citizens.

The Jewish groups that we know off now because of the Parkland school shooting are:

4) The other major one in the political arena is AIPAC.

Does anyone know of any more for a list that can be compiled for a total exposure in the quest for repairing the America (we all once knew and enjoyed to a far greater extent)?