(On the left, Communist Jewish Gulag commandants in the USSR. On the right, Zionist Jewish pioneers at Kibbutz Gan Shmuel in 1921. Both are making the classic Masonic hand sign.)
A pattern reminiscent of pre-war Germany
has emerged in the US and Europe.
There is an intensifying conflict between
"Left" (globalism) and "Right," (nationalism)
which are each backed by a Masonic Jewish faction, Communism, and Zionism. In fact, these two are one.
This article from Jan 17, 2017, is looking increasingly prescient.
Trump belongs to the Zionist faction. Does this portend another world war?
By Henry Makow Ph.D.
What is Donald Trump's place in the big picture?
Trump is a Freemason and probably a crypto Jew. He is surrounded by Jews. The Masonic Jewish (Illuminati) goal is the reduction of the human race (goyim) to the status of domestic animals serving them. We see this emergent pattern in the gross disparities of wealth  in today's world.

The Illuminati advance this agenda through mind control (mass media, education) and war. They can't subjugate humanity alone; they need the goyim to destroy each other.  "War is revolutionary," insider Chaim Rakofski said.
Thus, they have developed a tag team to promote war. On the one hand, we have the Communist Jews ("globalists") who attack the goyim by undermining their national, religious (moral), racial and family (gender) identity. On the other hand, are the Fascists, Nazis or Zionist ("nationalist") Jews, who seem to defend the goyim from this onslaught. Trump won the election by appealing to the latter demography.
From a different angle, we have a conflict between philo-Semitic Masonic Jews (Communists) and "anti-Semitic" Masonic Jews (Fascists, Nazis, Zionists.) While claiming to defend Jews, Zionism uses anti-Semitism (and false flag terror) to coerce Jews into serving their megalomaniacal agenda.
Similarly, they use false flag terror to herd the goyim. The genuine goy elite has been decimated in wars contrived by the Illuminati. The elite goy vestige (Freemasonry) has been co-opted with the promise of a share in the spoils.
In  Zionism in the Age of the Dictators (1983), author Lenni Brenner claims that Zionists have always betrayed the Jewish masses, whose interests were defended by the Bolsheviks and their heirs, the Trotskyists. During the 1930s and 1940s, Zionism collaborated with the fascists and Nazis. (27-37)
ENSLAVEMENT
Zionism is not only about a Jewish state; it is about a Jewish world-order. The same applies to Communism: they use "social justice" as a ruse. The Jew World Order is achieved by pitting the goyim against each other. Most Jews are not aware of this. They would gladly assimilate but, like the goyim, they have been tricked into supporting Zionism or Communism.
Arnold J. Toynbee was a propagandist for the Communist (globalist) faction.  He wrote, " There has also been the aim of converting the Gentile world to the worship of Yahweh under the aegis of a world-empire centred on Eretz Israel and ruled by 'the Lord's Anointed': a coming human king of Davidic lineage." (Reconsiderations, 1961, p. 486).
"The guilt - or merit - of having put Jesus to death is ascribed in the Talmud to the Jews, not to the Romans." (p. 481)  In other words, Cabalist (Masonic) Judaism is Satanic.
There are many signs that the Nazism was funded by Zionist Jews.  For example, Churchill said ex-German Chancellor (1930-1932) Heinrich Brüning  revealed  the identities of Hitler's backers in a 1937 letter:  'I didn't, and do not even today for understandable reasons, wish to reveal from October 1928, the two largest regular contributors to the Nazi Party were the general managers of two of the largest Berlin banks, both of Jewish faith and one of them the leader of Zionism in Germany." 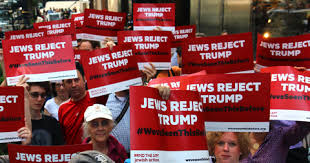 PARALLELS WITH 1930's GERMANY
Barack Obama is a toady and lickspittle for George Soros and the Communist Jewish faction.  "Communist" Jews are in the forefront of the hysterical opposition to Donald Trump, threatening an ongoing campaign of civil disobedience and worse. Thus we have a situation similar to Weimar Germany where Communist and Nazis fought each other in the streets, and later Communists and homosexuals were rounded up.
Apart from Trump's unequivocal support for Israel, many indications suggest he is in the Zionist camp. His "chief strategist" Steve Bannon was from Breitbart.com, a probable Mossad front which defined Trump's anti-migrant, anti-Iran, anti-free trade and pro-Russia policy. See Makow "Have Americans Been NeoConned?"
Uber Zionist Sheldon Adelson is reported to have promised Trump $100 million for his election campaign. 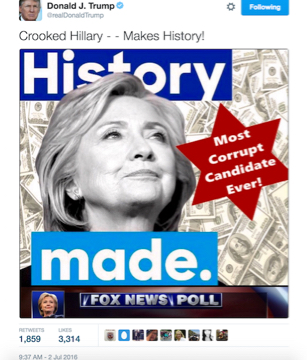 Then there are the dog whistles.  Trump's extremely effective final campaign commercial pictured Janet Yellin and implied that Trump would "drain the swamp" by attacking the Fed and Goldman Sachs.  An earlier ad attacking Clinton corruption featured a Star of David. The Commie Jew faction was quick to assert that Trump represents "white supremacists."   (Indeed, any attempt to defend traditional America is equated with "hate.")
All the European nationalist "far right" parties are lining up behind Zionism  while the globalist anti-Putin factions are in the Communist Jewish (Soros) camp.   The latter flooded Europe with Muslim migrants. Now thanks to Zionist false flag terror, Europeans are identifying with Israel.
Recently 70 nations beholden to the Communist Jew agenda held a meeting in Paris which held up hope for a two-nation solution to the Israeli Palestinian conflict.
Netanyahu dismissed this as the last vestige of a dying era. "This conference belongs to yesterday's world. Tomorrow's world will be different -- and it is very near."
What does "tomorrow's world" look like?  If present trends continue, the Northern hemisphere will be a pile of radioactive ruins. Putin, like Stalin, is a nationalist. I see Russia China and Iran facing the "Zionist" West.
Communism is a monopoly of power, money and culture by the cabalist central bankers. This monopoly requires the dissolution of "all collective forces except our own." (Protocols of Zion, 16.) As I said, these collective forces are race, religion, nation and family (gender.) Hence we have a conflict between Communism and Nationalism, which appears to be backed by Zionism. The question is, can we trust our defender?
Trump has answered this question. Zionism can quickly pivot to embrace the goals of Communism (war)  because they are both cut from the same Masonic cloth and ultimately stand for the same thing. Masonic Jewish central bank tyranny.
--------------------

----Why are European Nationalists Appealing to jews and Gays?

Irish Savant - Supporting Israel Excellent Tactic for White Nationalists
Putin as Freemason - Is he Part of the Charade?
First Comment from James Perloff-
The artificial conflict you speak of, between communist Jews and nationalist Jews, reminds me very much of the home conflict during the Vietnam War.
In that one, the hippies and yippies (I then counted myself among them) took to the streets in protests that often turned violent. But, just as today's protestors are funded by Soros, the hippies back then were unwittingly being funded by the Rockefellers (as just one example, I used to hawk Boston's most left-wing underground newspaper, THE REAL PAPER, and its publisher was David Rockefeller, Jr.).
Likewise, the men in our government who got us into the Vietnam War (Rostow, Bundy, Acheson) were not anti-communists but CFR globalists in the mold of today's Neo-cons. They prolonged the war into a 14-year divisive mess, and turned us from a "Leave It to Beaver" culture into a Woodstock culture. I sense they may now be taking a cue from that Vietnam War playbook, and are seeking to create another national divide. These protestors committing violence over Trump's Tweets--why weren't they out protesting Bush and Obama for ruthlessly bombing Iraq, Libya and Syria? Phoney as a dollar bill with Soros's picture on it.

Another excellent article, Henry; it explains the staged Zionist vs. Communist struggle. I think Putin is just another crypto Jew.

Its not hard to see the dialectic between Bolshevism and Zionism in the USA and in Canada. We have a choice to elect the Left, the Bolsheviks (proponents of egalitarianism, multiculturalism and collectivism) and Right , the Zionists who continually take us to war with Israel's enemies and who are often known Israel firsters who populate their advisory committees with Israel firsters. They appear to be at odds with one another but are both Jewish (Talmudic) in foundational belief.

In the end its the money changers that effect change and Zionism and Bolshevism are ideal tools to create divisions among populations. I think Jews are the agents and the powers behind change to world government but I find it hard to believe that a Talmudic nutcase sits at the very top.

Also, humanity faces the threat of technology itself. When robots come into mass production their effect will be quick and be much larger than the effect of the PC. Robots could do many jobs that take years to train humans in addition to the tasks that require little thought. I could imagine robot dentists and surgeons doing jobs that are perfect.

Its the money changers and their wars that drive technology forward at an unbelievable pace. Nothing is better for technological development than war. I think that not being a monetary reformer first and foremost is to miss the target. I explain and prove that the national debt is not real here:

. I also clear up popular misunderstandings about money.

Two comments on the latest divide and conquer article::

1. Hitler also threw plenty of Catholic priests into his camps.

2. Interesting how Trotsky and his followers were globalists while Stalin said the communists should solidify their control of the Soviet Union before attempting to conquer the world.

But now you make a good argument that the Trotskyites, America's neo cons, have actually switched sides from the great social levelers of communism and are the real pushers of the super-nationalist conceit that the U.S. is the "exceptional" (God's special) nation in the world. Interesting how easily these people can totally reverse their political roles and ideology while retaining their talmudic "holier than thou" status no matter which side they represent at the moment. To me it is obvious that all are just play acting roles and the real ideology of them all is that of Satan whose present earthly capital is the City of London with its Rothschild cabal.

Compliment for your latest article ‘Trump & The Masonic Jewish Tag Team’. Here is my reaction.

“Creating opposites concerning thesis and antithesis always worked in politics and in manipulating the minds and souls of the masses through the media. Your article is a good explanation of this principle. All the various kinds of ism’s are a mere distraction of the real inner values concerning the real evolution of consciousness and mankind. There is actually one kind of ism that I miss in your analyses and that is Jesuitism. What could the role of the Jesuits and their connection with both Trump, Clinton and Israel be? Both are descendents of the same satanic royal European blood lineage.

So my question is, to which extend the Jesuits will play a role in bringing about the synthesis between the thesis and antithesis you mentioned. The Rothschilds as usually control them all, including the seat of the Antichrist, that soon will be or is maybe already erected in Jerusalem.”

Henry, we can all take comfort in knowing that Trump is the quintessential American in that:

"His speech suggests a man with scattered thoughts, a short span of attention, and a lack of intellectual discipline and analytical skills...For listeners who identify with Trump, there is little they need to do but claim what they’re entitled to. No need for sacrifice, for compromise, for complexity. He taps into fear and insecurity, but then enables his audience to express that fear through anger. And anger gives the illusion of empowerment...He's an undisciplined narcissist who craves power but doesn't have the intellectual capacity to exercise it wisely." Tara Golshan, Donald Trump's unique speaking style, explained by linguists, January 11, 2017