German Jews Would Have Backed Hitler...if Only 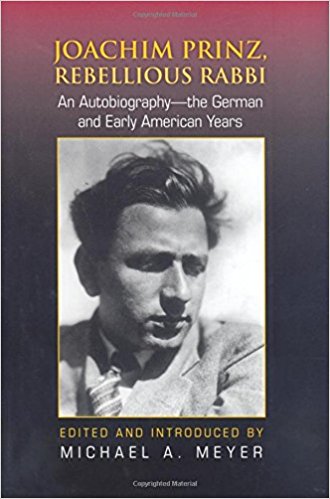 Does the experience of German Jews in Nazi Germany contain a lesson for American Jews?
"The apparent inability of Jews [is] to understand or predict their own catastrophes.
The Jews, whose history consists of one tragedy after another, have yet to be prepared for any one of them." Joachim Prinz - The Secret Jews
When the NWO goes sour, Jews will get the blame. "The average street jew might not have any power whatsoever but they still have the collective hive mind which makes them dangerous and their connections to other hive minds with similar interests infinitely more so."
by Henry Makow Ph.D.
Germany's Jews were more German than Hitler, wrote Rabbi Joachim Prinz who was their spiritual leader in 1930's Nazi Germany.
German Jews " really wanted Hitler and I am sure that if Hitler had not been antisemitic, a large part, even a majority of the German Jews would have become National Socialists. After all, they were as German as the others, and all the German instincts of obedience and discipline were also in their blood..." (159)
Germany's 550,000 Jews had assimilated and were bewildered by Nazi race persecution. Many didn't even know they were Jewish and, as today, most didn't know what it means. About 60% of Jews married non-Jews.
Clearly, Hitler was a trick played on German Jews by the Zionists who financed him. Jews were needed as cannon fodder for Rothschild's demented world tyranny, the NWO.
Prinz wrote that "assimilated" isn't the right word to describe German Jews. "We are talking about a complete cultural and political integration and adjustment...They were as German as the German as the Germans, and sometimes even more so...They had lived in Germany for 1600 consecutive years...the first synagogue had been built in the fourth century when the Roman army had occupied the Rhineland. Twelve thousand Jews died for the Fatherland in World War One." (146-148)
The Nazis expelled Jews from participation in national life. They could not serve in the arts and professions, intermarry, or even sit in the parks. Many committed suicide.  Prinz, a Zionist, urged his flock to emigrate. Apparently half did.
Prinz ministered to the beleaguered vestige who naturally felt confused, rejected and inferior.  He convinced them that there was a certain honor in being unjustly persecuted.
"My goal was to make my people into a group of human beings who would feel superior, not in spite of but because they had been selected as targets of hatred and murder. I wanted them to rediscover their own nobility ...that they were infinitely superior to the so-called Aryans, that their nobility went back thousands of years-- a nobility of love, not hate, of humanity and not brutality." (105)
In my opinion, this was the wrong approach. It reflects an inability to consider anyone but themselves. No people want to dominated by another.  Although less than one percent of the population, Jews controlled the politics, culture, and economy of Weimar Germany. In the major cities, they dominated the professions. The result was that, as in the US today, any non-Jewish expression was stifled. As early as 1892, German Gentiles were resigned to being an occupied people.
Prinz details this domination when he explains why Jews weren't prepared for Hitler: "The Jews were the great chemists and physicists, the mathematicians and philosophers, the publishers of newspapers and the most important publishers of books. They owned all of the important department stores and most of the private banks, such as the banks of Mendelsohn and Bleichroder." (147)
Here is a more extensive contemporary account.
The proper approach would have been to explain to Jews why they were being uprooted by the Nazis. People want to be masters in their own house. The central bankers will not permit this.
The irony is that Prinz encouraged them to go to Israel which practiced the same ethnonationalism as the Nazis, including ethnic cleansing. Jews will never be liberated until they acknowledge that, incredibly, Judaism is a satanic cult masquerading as a religion.  This is the real cause of antisemitism. See also. 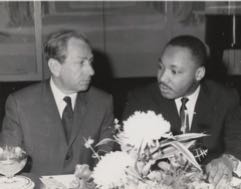 (with MLK)
Can you imagine a Hitler and Nazis that were not anti-Semitic? With the Jews behind him, Hitler might have conquered the world indeed. In any case, 150,000 Jews and half-Jews joined the Wehrmacht, including many generals. However, Germany was never going to win. The whole point of Hitler was to create the State of Israel and destroy the old Germany.
Prinz left Germany in 1937 and spent the rest of his career in the US as a rabbi and as President of the American Jewish Congress. Generally, he found American Jews to be mediocre and he was appalled by Jewish anti-Black racism in the South. In another irony, he refused to leave his synagogue in Newark N.J. when Jews were the target of Negro hatred. The synagogue went under. He espoused a "humanism" that is admirable but, like most Jews, I doubt if Prinz really understood that Judaism is about supplanting God with the Jewish people, aka Rothschilds et al.
American Jews are in the same position of Jews in Weimar Germany. The proper Jewish response is to disassociate from the subversive agenda of Organized Jewry, and the treasonous Gentile Masonic elites, and make common cause with the European Christian majority, and conservative minorities as I, an assimilated Jew, have done.
Just because Judaism is a fraud doesn't mean Jews are. Most Jews have no knowledge or connection to the Talmud and Kabbalah, the two cornerstones of Judaism. They flock to other religions. We are all people. Not all that dissimilar in our souls and physical predicament.
Ordinary Jews don't need to participate in Rothschild's demented megalomania, nor take the rap for it.
Given our current direction, American Jews could find themselves in a predicament similar to the Jews in Nazi Germany.
Related -
Prinz- The Secret Jews
http://www.joachimprinz.com/
Jewish Leader Bridged Nazis and Civil Rights

Comments for "German Jews Would Have Backed Hitler...if Only "

"The Nazis expelled Jews from participation in national life."

Only after the German people learned of the Jews in their midst treachery. They eventually found out that in the Summer of 1916, World Jewry was alarmed that Britain was mulling over the decent peace proposal offered by Germany to end WW I. This could not be allowed to happen, as it interfered with their centuries old plan to establish a Jewish state in Palestine. So they made an offer the Brits couldn't refuse; refuse the peace offering and hang in there for a while longer and we'll bring the USA into the fight on your side and England will win the war, then the English can dictate the peace terms. All Jew Inc asked for was a piece of paper stating the England would help Jews in their quest for Palestine, which became known as the Balfour Declaration.
Besides taking control of all of Germany's main banks--except one--German Jews also helped turn Germany, especially Berlin, into a cultural cesspool after WWI, by setting up brothels that offered up any kind of sex; drug dealing and--as they are known in the USA--being the top dog in the pornography business. All of which repelled the good and decent German people, but what could they do, their nation was falling apart, putting food on the table and a roof over their families heads were more important.

Then came the final blow in 1933, when World Jewry announced they were going to boycott Germany all over the planet by announcing war with Germany, albeit a financial one. Just at the time when Germany was starting to recover from the devastating effects of WW I.

That's when German people said "Enough" and demanded the government get these parasites out of midst. Which led to the Transfer Agreement or in Yiddish, Haavara, lasting from 1933-42. A period of time when Germany helped Jews immigrate to Palestine, gave them money to do so and endless amounts of equipment, machinery, materials, and advice on how to set it all up.

Those that didn't leave eventually were moved to forced labor camps--like Auschwitz--and from there Hitler planned on moving them to the newly acquired territories in the East, what was called the TERRITORIAL Final Solution, but Jews and their MSM have craftily removed the 'Territorial' from their nonstop hasbara campaign, regaling the Goyim with the nasty sounding Final Solution.

Here's a link to an excellent synopsis of what the post-war Germans were forced to endure under the Jews.