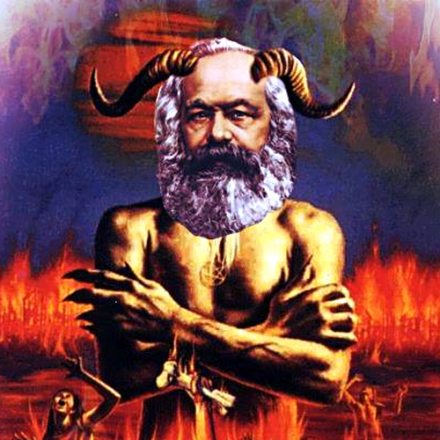 Karl Marx and the Occult
Karl Marx deliberately underfed his children to death to attract occult luck from protectors in powerful positions according to a carefully followed ritual practice (by transfer of pity energy).
by Francis (a voodoo expert)
(henrymakow.com)
Sorry.  I must rectify one error, though a very big one : Karl Marx' children did not die because his pay as a British secret service agent was too low (actually he had a kind of unlimited expense account he could use for whatever academic or research work he undertook, quite like in the future Soviet agents' fashion who had a state, and throughout his whole life Karl Marx knew no other trade but being a secret agent for various states).  Karl Marx had all the resources to feed a tribe of children.  Karl Marx deliberately underfed his children to death to attract occult luck from protectors in powerful positions according to a carefully followed ritual practice (by transfer of pity energy).
This guy though not very powerful politically was an even more evil soul than Lenin, Stalin and Mao would be.  In the same way there is a degree of goodness that cannot translate very easily in goods of this world, there is also a degree of evil that prefers to hide under the guise of modesty of apparent status and fortune and doesn't translate that easily in crimes performed or underwritten by oneself.  When your ambition is to talk to billionaires, to enter their living rooms at will without being invited nor stopped or seen by their security guards, and decide who is to be one you must renounce not only to be one but also to live an easy life, and quite often you have to plunge your immediate family into misery : this is done on purpose.  All actors being hired in Hollywood have to perform a few ritual rapes to prove their soul is on the right dark side of the force but they generally don't go beyond.
The austerity of life is not necessarily at all a sign of virtue, that equation too many readers on your side assume to be true in an attempt to justify otherworldly Christianity in front of this-worldly Judaism just doesn't hold any better than the reverse equation.  When you are alone in life austerity can be good sometimes for your inner life to become more interesting but if you have children you have to sacrifice intellect, not riches.
Karl Marx is the perfect example of someone who should have been barred from all institutions of higher learning during his lifetime and then as an academic reference.  Wherever the name of Karl Marx in invoked in any respectful way in any institution, be sure that honesty had died for good in that institution, this name is actually used as a mere marker guaranteeing the dishonesty of many other doctrines and institutions having nothing to do with any subject Marx actually investigated or wrote about.  The very name of Karl Marx is a powerful mantra of witchcraft to use to ruin any enemy's career for your own fortune.
Moreover, combating Karl Marx on a merely intellectual plane without going into his deep spiritual heresy first transmits his evil influence with a greater force than mere partisanship and admiration, and any doctrine that embarks upon merely contradicting for instance Marx' mere economic positions as technical errors, as neoliberalism has been doing, is bound to morph into full-fledged classical totalitarian Marxism at some later point of their evolution.  The only way to deal with Marx is prayer and renouncement to all human talent to settle his case.