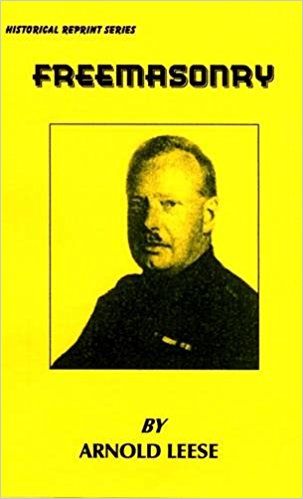 Freemasonry is the Church of Satan.  Of course, the uninitiated "Blue" ranks aren't told they worship Lucifer. Satanism is the inversion of all values, the normalization of sickness and the denial of reality.

Albert Pike: "Masonry, like all the Religions, all the Mysteries, Hermeticism, and Alchemy, conceals its secrets from all except the Adepts and Sages, or the Elect, and uses false explanations and misinterpretations of its symbols to mislead those who deserve only to be mislead; to conceal the Truth, which it calls light, and draw them away from it." [Morals and Dogma, p. 104-5, 3rd Degree]

Manly P. Hall: "When a Mason learns the key to the warrior on the block is the proper application of the dynamo of living power, he has learned the mystery of his Craft. The seething energies of Lucifer are in his hands and before he may step onward and upward, he must prove his ability to properly apply energy." [The Lost Keys To Freemasonry, Manly P. Hall, p. 48; Emphasis added]  Source

and    Many politicians are Freemasons.

The purpose of this pamphlet is to expose the subversive activities of Freemasonry and its ramifications; whence its inspiration derives and where its control lies.

Every Freemason is not a revolutionary; but all Freemasons are, either wittingly or unwittingly, helping in the work of destruction of Aryan Christian culture and civilization. They have taken an oath of secrecy and when the interests of their native land clash with those of their hidden masters, they must either obey the latter or be destroyed, as were many patriotic French Freemasons at the outbreak of the French Revolution.

It will be argued by Freemasons that their masters are not hidden and that many honoured--even Royal--persons are to be found at the head of Freemasonry. In this connection the attention of the reader is called to a letter of Piccolo-Tigre, dated 18th January, 1822, on recruiting for the Haute Vente Romaine, a revolutionary secret society connected with Freemasonry:--"The Haute Vente wishes that, under one pretext or another, as many princes and rich men as possible be introduced into the Masonic Lodges. Princes of Royal Blood . . . . flatter their ambitions for popularity, prepare them for Freemasonry . . . . the Haute Vente will then be able to do what it can to be useful in the cause of progress. In the meantime, they will serve as an attraction to imbeciles, intriguers, crooks and loafers. These poor Princes will serve our cause while thinking that they are working for theirs. This is a magnificent deception, and there are always plenty of fools willing to compromise themselves in the service of a conspiracy in which every Prince thinks himself to be a benefactor."

The hidden rulers of Freemasonry thus classify rank and file Masons as "imbeciles, intriguers, crooks and loafers"--food for thought for the dupes in the lower degrees of Freemasonry, who look upon it as a philanthropic institution.

Here it must be explained that Jewish magic consists in experiÂ­menting with the hidden forces of the human body, producing mass-hypnotism, etc. Such experiments are apt to produce physical wrecks, destroying the will-power of resistance, and should only be permitted under scientific control.

The first notorious head of Gnosticism was Carpocrates, a Jew of Alexandria, who lived under the reign of the Roman Emperor Hadrian (A.D. 117-138). Carpocrates's son Epiphanes was the author of a work entitled "Justice" which advocated a very outÂ­rageous form of Communism. More than 60 different sects of Gnostics arose; they all had mysteries, initiation rites and cereÂ­monies, and also signs and symbols. 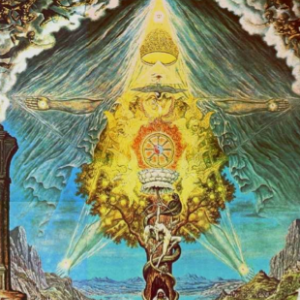 The tenet common to all of them was Dualism, or the co-existence of two principles, one good, and the other evil, or God and Matter. God could not approach matter, and from this was derived the teaching that the soul could not be sullied by the actions of the body. Hence Gnostics fell into licentiousness and perversion, their esoteric (or hidden) doctrine is that nothing was really evil by nature.

Gnosticism spread rapidly amongst the Jews, who in their turn regarded the establishment of Judaism over the world as one of their chief aims. They proselytised at different times in great earnest, {The Ashkenazim (or German) Jews, which compose nine-tenths of the Jewish nation, are the descendants of the inhabitants of the Khazar Empire, who were converted to Judaism by Jewish missionaries in 720 A.D.} so that first Rome and later the Christian Church forbade the embracing of Judaism.

"The Jews fully believed that it was their destiny to be a light to the nations and they acted upon this belief. They attracted the Gentiles to their synagogues, they sent out preachers among the pagans to spread their teaching far and wide," writes the Jew, Norman Bentwich. It was when he was forced undercover that the Jew stealthily pursued his aim and attacked the spiritual and intellectual stronghold of the Gentiles of whatever religion, Christian, Mahommedan or Buddhist, by means of subtle penetration, i.e., destruction from within.

"Masonry is a Jewish institution whose history, degrees, charges, passwords and explanations are Jewish from beginning to end."--Dr. Isaac Wise.

IT has already been shown in this pamphlet that the basis of "Speculative" masonry, its symbolism and code of ethics, is Jewish Gnosticism. The question which arises is, where does the control of Freemasonry lie to-day, and how is it controlled? To the first part, we unhesitatingly answer, in the B'nai B'rith, {Literal translation, Sons of the Covenant, the covenant being that of circumcision.} and to the second, through the higher rites, especially the Rite of Mizraim.

The B'nai B'rith was founded in New York in 1843 by a number of "German" Jews, and its organization into Lodges stamp it as a Jewish Branch of Freemasonry. In his book "Adriano Lemmi," page 225, Domenico Margiotta gives the full text of a secret treaty made in 1874 between Albert Pike, as representative of the Supreme Dogmatic Directory of the Scottish Rites, {Headquarters at Charleston, U.S.A., on the 33rd parallel of latitude.} and Armand Levi for the B'nai B'rith of America, Germany and England. The following is extracted:--

When one considers that the Scottish Rite was founded by Jews in 1761; and that Albert Pike, Grand Master of the Order and Sovereign Pontiff of Universal Freemasonry, gained his position through the influence of the Jew, Moses Holbrook, a previous Grand Master, the reader will appreciate that there are grounds for saying that the B'nai B'rith is the "secret masonry which is not even known to, and the aims of which are not even suspected by, these Goy cattle, attracted by us (the Jews) into the "Show" army of masonic lodges." {The Protocols of the Learned Elders of Zion, No. 11.}

The Rite of Mizraim, since it has been mentioned, deserves some explanation. It was founded in 1805 at Milan, and was introduced into France in 1816. Essentially Jewish, the rite had 90 degrees until it amalgamated with the Rite of Memphis in 1875, when the number was increased to 97. The Rite of Mizraim is principally notorious for the reputed fact that the Protocols of the Learned Elders of Zion were stolen from a Jewish Lodge of Mizraim in Paris in 1884 by Joseph Schorst, a Jew. {See "Waters Flowing Eastward," by L. Fry, obtainable from the I.L.L., price 3/10, post free.}

It is a damning fact that today (1935), one of the conditions for the withdrawal of the Jewish boycott against Germany, is the restoration of German Masonic status and property. {See "The Fascist," February, 1935.}

Comments for "Freemasonry Conceals Its Diabolical Secret from Members "

Levels of initiation can be found in many institutions if one knows what to look for. Mithraism had seven levels. Claims to have discovered the content of those seven levels are, as far as I have seen, false. The content seems to have been kept permanently secret. One can see levels of initiation in the military, as Smedley Butler discovered. It takes a while to discover that one goal of so-called environmental organizations is not really to protect Nature but to keep it out of the grasp of individuals who can benefit from it, so that Nature itself remains the property of the highest levels of the banking community, to despoil in their own fashion. Of course, as you have tirelessly pointed out, the secret level of initiation that unites so many superficially disparate branches of society is the belief that Satan rules the world, and those who wish to rise in wealth and power must worship Satan