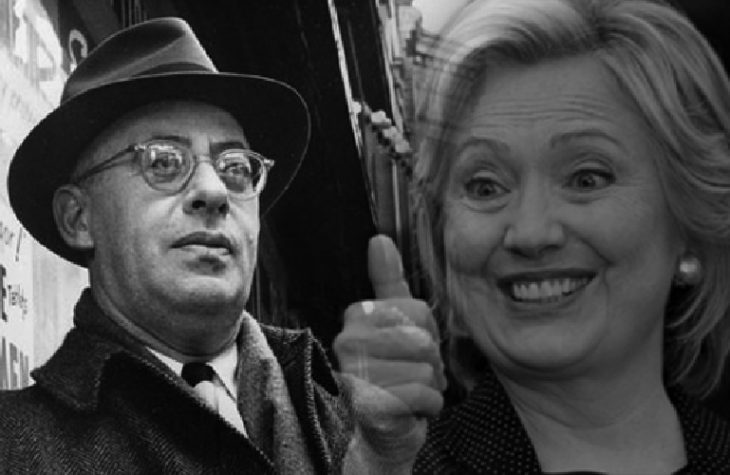 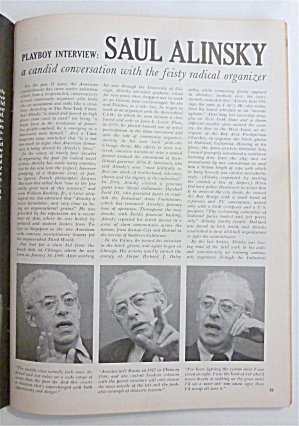 Alinsky famously dedicated his book, Rules for Radicals, the subject of Hillary's thesis, to Lucifer, "the first radical who rebelled against the establishment and did it so effectively that, at least, he won his own kingdom."
In 1972, he said in a Playboy interview, "If there is an after-life and I have anything to say about it I will, unreservedly, choose to go to Hell. Hell would be Heaven for me. All my life I have been with the have-nots.  Over here if you're a have-not you're short of dough.  If you're a have-not in Hell you're short of virtue.  Once I get into Hell I'll start organizing the have-nots.  With a smile.  They're my kind of people."
Saul Alinsky was the author of Chicago's community organizing.  Barack Obama's only work experience previous to election as an Illinois senator was as an Alinsky movement community organizer.  As a state senator, a huge number of his votes amounted to a contemptuous "present." ...

(Author, Mallory Millett)
ALINSKY INFLUENCE
The more I learn about Alinsky, the clearer Hillary becomes trick by trick, play by play, dodge by dodge, antic for antic.  She has studied her master well: in the fifties, Alinsky worked assiduously to co-opt Roman Catholic clerics into his movement.  He enlisted Bishop Bernardin of Chicago and Father John Egan, who went on to run Notre Dame University, knitting Alinskyism into the Catholic culture so that now, most of the Catholic colleges and universities are barely recognizable as being related to the Faith.
Bella Dodd, a Catholic-turned-Communist, later recanted, saying, "In the thirties, we put 1,100 men into the priesthood in order to destroy the Church."  She told of a national Communist convention held in 1944 in Madison Square Garden.  "I attended a private dinner where Alexander Trachtenberg, a known socialist, got up and said, 'When we get ready to take the U.S. we will not take it under the label of communism.  We will not take it under the label of socialism.  These labels are unpleasant to the American people and have been spared too much.  We will take the United States under labels we have made very lovable.  We'll take it under Liberalism, under Progressivism, under Democracy.  But take it we will!'"... 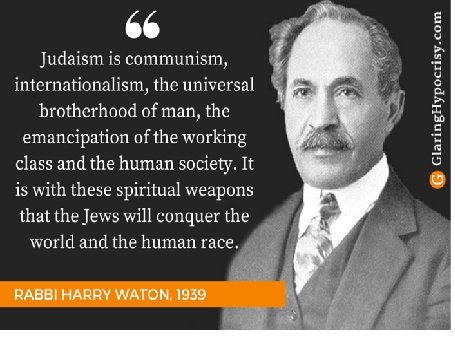 Remember Trachtenberg's statement about the more lovable words?  Progressivism?  Liberalism?  This became the vocabulary of the Sexual Revolution.  After this disturbance of our Judeo-Christian culture - brought on by atheists Erich Fromm, Wilhelm Reich, and Herbert Marcuse, who were the mentors of Progressives Mark Rudd, Kate Millett, and Bill Ayers (he launched Obama's political career in his living room), who held Columbia University hostage during the student takeovers of the sixties - my older sister, Kate, was inspired to write her Ph.D. thesis, "Sexual Politics," which exploded on America like a meteorite.  It transfixed women, shattered the family, and helped retool our society into something unrecognizable.  Oddly, it mainstreamed immediately into a Book of the Month Club selection.
This movement, the Sexual Revolution, along with Alinskyism and secular humanism, a belief that the people's will should be surrendered to the secular state, lies at the heart of Clintonian Progressivism.  We Christians and Jews know, as did our Founders, that our rights are derived from God, alone, never from government.  Government must never control us.  The people must always be the power that drives government. 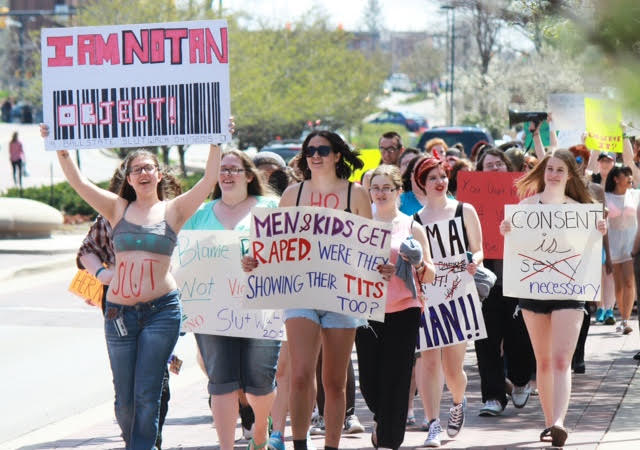 (Innocent women naively embrace Satanism. Society hasn't figured out that it is being deliberately degraded & corrupted.)
"Sexual Politics" teaches in women's studies classes all over the university culture that the family is dispensable as the foundation of society and that freedom, for women especially, means to live wantonly for the sole purpose of exploring "ourselves" and our sexuality, and to hell with anything else.  To wear a t-shirt emblazoned with the word "slut" is liberation.  "Be a slut," it teaches young girls.  "And be proud of it!"
This is the real basis of Hillary's philosophy, Hillary's Progressivism.  Truth is a lie, and lies are truth.  This is how we get the Jane Fondas, Lois Lerners, Loretta Lynches, Elizabeth Warrens and Huma Abedins of our time.
Today's phenoms such as BeyoncÃ©, Madonna, Bruce Jenner, Nicki Minaj, etc. are direct results of this mutation of our national character.  These purveyors of pansexualism shaped by Sigmund Freud and the pursuit of the Pleasure Principle and orgasm-worship, formed into a false Marxist humanism smashing family life, infiltrating education, law, media, the military, unions, materializing socialist revolutionary politics at a mass level.
And, to think, you came dangerously close to electing this reprobate president of The United States.  Leader of the free world.  Congratulations to Donald Trump - and to you, America!  After years, the sleeping giant has awakened.
---------------------------
Mallory Millett resides in New York City with her husband of over twenty years.  CFO for several corporations, she is a longstanding Director of The David Horowitz Freedom Center and sits on the Board of Regents for the Center for Security Policy. Her web site is here. Mallory was suspended from Twitter when she posted that a tranny who, even after all the mutilations and hormones, is still in a body with Y chromosomes in every cell and if "he" is dug up three hundred years from now, the DNA will scream "male Homo sapiens".

Blessed are the havenots for they shall inherit the earth when the synagogue of Satan goes to hell where it belongs to find out that hell 'ain't that pretty at all'.

George Lucas* movie , before Star Wars, is a predictor of Brendon's future though without the free lollies...

One gets to see the patterns of twisted society and the rinse and repeat formulas applied after a while **. We need immunity from these and not their immunities from morality or their fictitious escapist lone rebel happy endings that preclude organised sanitation.

* not to be confused with totally Communist George Lukacs of the Frankfurt School, though I wonder about that.

For my part, anti-isms is just as bad as ism's. There be worthy babies in the swamp's bathwater. It's the use and abuse of the tools that is the issue.

** spelled out clearly by Christina Stoddard in her excellent Light Bearers of Darkness ( 1930) I am reading.

There is a supermassive black hole in the heart of the so-called roman catholic church and the Vatican, as evidenced by the dark matter called confession, whereby priest will go to jail rather than report pedophilia, for example.

And why would that be, because large mysterious objects in groups also circle that blackness, ancient clusters of organized pedophilia and worse.
and why, because at its heart it is a demonic organisation, clothed in fleece, greased with the blood and money of countless lives, countries and more, for much longer than its apparent age of 1700 hundred years, its claimed age of almost 2000 or even Romes formative age of approx 2700 years, to find where that worms hole goes, you need to understand why ancient Greeks sacked Troy, an ancient Phoenician outpost that birthed in that event the patrician families of ancient Rome, and discover why and how the baals were worshipped, and what that had to do with Babylon, and still does, even to this day in the satanic smoke that covers the unholy see and its damnable and equally pedophilic children, especially islam.

I meet so many "nice" and "decent" people Henry - even hardcore Communists who love Jesus as a radical street activist. They are duped by the "nice" language. They always get us with "language".

Obama is such a "cool dude", "Are you down with TPP Henry?"

Who would not be for sharing and caring? Human rights? Smart Cities using technology for good? And above all, a new set of great sounding laws and rules based in Amitai Etzioni (based in Israel - of course) "Communitarianism", the Hegelian "synthesis" of capitalism and communism.

Apparently, we need a de-centralized "feel good" corporatists based "Smart City" "guild" of Soviet-style "kibbutzim" based around each Smart City/Gulag Archipelago. A high tech high rise with organic local gardens, caring and sharing, high tech robots, shopping center at the base of the high rise with us all in our Kibbutz "human rights" guild of indoctrinated feel-good socialist caring cuddle bear bright shining destiny warriors. They tried all this in the late 60's and 70's. All the rich Jewish kids with banker dad's who dropped acid and dropped out with their Freudian Jungian therapist advisers. It all ended in a pile of degenerate angry, destructive and narcissistic idiots who woke up, got a job and moved to the suburbs. Here we go again. But this time they have Prozac, medical nanotechnology and brain chip implants - high tech kibbutzim - with robot guards made by Bi Bi and China. What could go wrong? Cant wait.

Yes, these are obviously sick people.
Hell is separation from God. These intellectuals really better watch out what they wish for.
The evil from these people has polluted and perverted their thinking.
It's laughable how these people think they are going to outwit their Creator.
Intellectualism and secularism are man-made and all their philosophies have eventually failed.