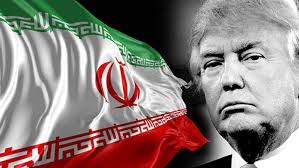 Have you noticed that the US is at loggerheads with
almost every country in the world except Israel?
According to Shayan Zarrin, US bullying will unite
the world in an NWO based on opposition to US hegemony.
Shayan Zarrin is 18 years old. His ideas are exceptional from a man of any age.
Persian Nationalist: The Truth about Iran Protests (footnotes found here)
By Shayan Zarrin
(henrymakow.com)
The recent anti-regime protests that have spread to almost all of Iran's provinces could very well be orchestrated by the Mossad/CIA.
On the outside, it looks like the Trump administration wants to use this unrest to overthrow the Islamic regime.
Rudy Giuliani said, "We are now ... able to see the end of the regime in Iran. The Soviet Union looked unbelievably powerful, and then one day it disappeared. The fact is that the Khamenei regime is much weaker than the Soviet Union ever was . . . . Freedom will come."
The alternative media is promoting the narrative that Iran is an enemy of the Jewish Power elite, (which I debunked in this article,) and that Netanyahu and the Zionist Deep State here in the U.S. are hellbent on overthrowing the Ayatollahs in Iran. I do not believe that the end goal for Iran is regime change. The rhetoric and escalation of sanctions against Iran are designed to bring Iran to the negotiating table.
President Trump alluded to this in June during his meeting with Kim Jong Un. Trump said, "I hope that, at the appropriate time, after the sanctions kick in - and they are brutal what we've put on Iran - I hope that they're going to come back and negotiate a real deal because I'd love to be able to do that but right now it's too soon to do that."
I believe that these sanctions will cripple Iran's economy, to the point that they will "submit" to the Trump administration's demands, which are essentially the same demands for Iran from Russia and possibly Syria now according to Haaretz.
Here Trump says Iran is in pain and will seek a new deal from him.
Additionally, the Trump Administration's sanctions on European companies with Iranian investments will continue to push Europe closer to Russia, just as the United States pulling out of the Iran Nuclear Deal is doing. The Jewish Power Elite's goal is to isolate the United States economically, while linking the rest of the world into a "multi-polar world order, fighting U.S. global hegemony."
Furthermore, the Trump Administration, Russia, and Israel all want Iran's proxy armies out of Syria and back to Iraq to the east of the Euphrates River, while Israel will get the land west of the Euphrates as "Greater Israel". As a result, Iran will be happily integrated into the One Belt One Road Initiative and will have its own piece of the pie in China's New Silk Road, with Jerusalem at its head. This is the Jewish Power Elite's End Goal for their New World Order.
The gradual Soviet-era integration of the world into a one world government, under the ruse of "fighting US Imperialism", which is what Iran's Press TV, RT, and alt-media sites like globalresearch.ca, Veterans Today, Youtube's really graceful, and many others are promoting. These talking points are nearly identical to Soviet Premiers and Stalin's talking points. Despite all this innocent rhetoric from Russia, they are engaging in some "imperialism" of their own. Russia was the first country to cash in on the Syrian civil war and sign numerous oil and gas deals of their own in Syria. This is exactly what U.S. oil companies did in the aftermath of the Iraq war. These Russian energy companies like Gazprom and Rosneft are all owned by the same Russian Jewish oligarchs from the USSR era.
And we all know that the Soviet Union was run by the same New York City Jewish Bolshevik bankers who continue to dominate Russia and the United States through their drug money laundering, human trafficking proxy Chabad Lubavitch which surrounds both Putin and Trump. This is the New York, Moscow, Tel Aviv Axis that is leading humanity to its demise, while fooling many that they are humanity's saviors.
------

The true end goal of the "Jewish Power Elite" is the enslavement of the world for their personal comfort and ego. All other intermediate goals are toward that end. However, the satanic drive to do this is insanely self-destructive to a degree most don't understand. Even those so driven probably don't understand it. Achieving their goal will not be able to stop it. As Gordon Winrod wrote decades ago, when there are only two of them left [as they kill each other off for MORE undivided power], one will kill the other and then that one will commit suicide [since there is no further power and ego to gain]. It truly is a death cult which brings smiles to Satan as he uses them up.

The article here contradicts itself (paraphrased): Iranâ€™s government is being â€œbullied into negotiating towards US interests by CIA/Mossadâ€, but is â€œno enemy of the Jewish power eliteâ€. The rest dissolves into a mishmash of unsupported/uncited pseudo-facts and blind spot exploitations, very akin to a â€œflat earthâ€ theoristâ€™s rendering. The truth is NOTHING but the truth and the whole truth. Shayanâ€™s ideas appear to be morphing on the fly to maintain a confirmation bias based on gaps in subject matter expertise.

Some things missing here from Shayanâ€™s equation - quickly: (1) the initial Iran peace deal was entered into by the United States to prevent the collapse of the Federal Reserve ponzi scheme on top of heads (keep Iran from BRICS/SCO/NAM) and as hedge to Russian/Israeli duopoly into EU via Leviathan/Nordstream II (both fast tracked and approved in EU in rapid succession); (2) The so-called â€œwidespread protestsâ€ are non-existent in Iran (Shayan relies on the â€œJewish Powerâ€ venues he decries for information); (3) and, Giuliani/Mukasey (9/11 criminals) joined the Reza Zarrab case to try and flip Zarrab against Iran and to explore options for Zionists to economically terrorize against â€œsanctions circumventionâ€. Everything others do to fight â€œUS imperialismâ€, which is Federal Reserve imperialism, the co-founders of Israel, will feed Shayanâ€™s confirmation bias and the â€œProtocolsâ€ (Talmudic) strategy to paint the enemy with oneâ€™s own colors.

Hi, Henry. There is no shortage of humans. We have to increase or at least maintain our numbers only if we wish to maintain our consumerist, excessively materialistic, unnaturally comfortable way of life, along with the globalist system that permits it to continue.

It has been said by others (and I agree) that the past approx. 60 years (especially in the western world but elsewhere, too, now) are but a weird anomaly in the entire history of man in terms of comfort, convenience, easy everything. This goes against nature and indeed what is good for us in the long run.

So very many people are kept artificially alive, and then we have the weakest of the weak rotting to death in nursing homes "cared for" by sullen third worlders. Believe me, I have personally observed this and all I could do was turn away. There was a time not too long ago when old people just got pneumonia, a bit of end-of-life care, and that was it.

Too late, I think, to try and sensibly restructure our economy and way of living. You can't undo the Age of Darkness; we can only watch and wait and indeed, this necessary and preordained phase has already started, though it is hard to judge things while they are happening. How many will survive? Only God knows the number, but I don't think it will be a large one.

Henry, I just read the well written and thoughtful article by the 18 year old young man. It's really refreshing to see light emanating from some of our youth and they haven't been poisoned by the "popular" opinions and culture of today. Thank you for your continued efforts to shine a light on the darkness of this world and may God continue to bless you