Did a Satanist Write the US Declaration of Independence? 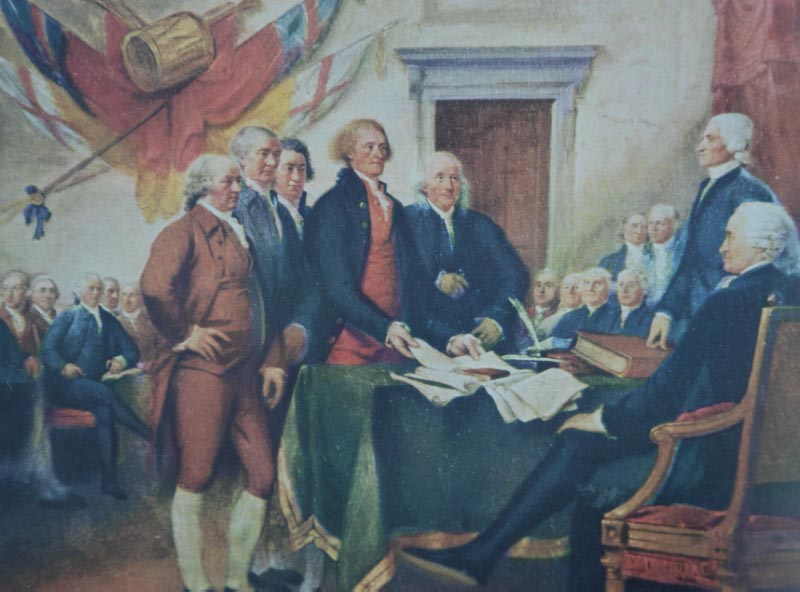 Drafting committee consisted mostly of Freemasons
July 4 is Independence Day in the US
The US Declaration of Independence was not written by Thomas Jefferson for the "Christian" reasons we've been told. It was secretly penned by Thomas Paine, a self-professed enemy of Christianity to advance the New World Order agenda.
This is a condensation of the complete article posted with citations.
from July 3, 2016
By James Perloff
(henrymakow.com)
"Everyone knows" Thomas Jefferson wrote the Declaration of Independence, but not "everyone knew" it in early America. Jefferson was on the drafting committee at the Second Continental Congress. However, he made no authorship claim until 1821, 45 years later, and even then did so ambiguously.
Since the 19th century, analysts have made a powerful case that the Declaration's real author was Thomas Paine (1737-1809), British writer of anonymous pamphlets, who arrived in America November 30, 1774, with a letter of introduction from Freemason Grandmaster Benjamin Franklin. This was less than five months before the orchestrated Battle of Lexington, the Revolutionary War's flashpoint.
Paine wasted little time fulfilling a mission. In 1775 he wrote the lengthy pamphlet "COMMON SENSE," which became the most influential document inspiring the revolution. Could Paine's overnight literary success in America have occurred without "helping hands"?

Comments for "Did a Satanist Write the US Declaration of Independence?"

Perloff has a very good case for Paine being the actual author of the Declaration of Independence. Jefferson had a proven record of publicly keeping Paine at arm's length while adopting his ideas. Both the ideas and the language of the Declaration are clearly more congruent with those of the iconoclast Paine than the establishment slave-owning gentleman Jefferson.

However, Paine cannot be described as a Satanist. He was a deist. The vilification of Paine over the centuries, similar to the abuse directed at Spinoza, Hume, and Darwin, fits into an unattractive pattern of insults directed to those few people who have the courage to try to break the mind-control network through reason.

This is what I'd call splitting hairs and getting wrapped around the axle. You can come to the conclusion that it doesn't matter if a Martian wrote it. At the end of the day, the American Declaration of Independence, and the subsequent Constitution & Bill of Rights are among the most important documents in all human history.

Sure, they were white men originating from family lines in Europe, whom had in mind creating a land for their brethren and not the [non-Caucasian] muddied masses of the world. Life sucks for those nice in the race club, right! Yes, they obtained cheap labor (commonly known as slaves) sold to them by Arabs and Africans. It's helps to not lose wars and end up on slave blocks. Sorry people. The Europeans didn't operate raiding parties, beaching boats on the African coastline, running into the jungle to grab black African victims, to be hauled back for labor and abuse. They were purchased fair and square according the business rules of the day. Sorry to disappoint you with some basic history! Do some homework on Africa and you'll find the practice of selling slaves is still operation to this very day.

The ultimate production of the Constitution & Bill of Rights and the belief therein, is what has ensured freedom in America for the past 240+ years. Without it, we'd be no different than any other third world shithole on the planet. Other nations, have derived freedom based on the idea of America. The U.S. government, if unrestrained by the First and Secondments especially, would have exercised Tienanmen Square activities against us on a regular basis. The people who run the U.S. government, behind the scenes, are the same who put the scum of the Earth dictators in just about every other horrid nation on the planet. If you want to see how life would be without of 'freedoms,' just get a look at how things are out there. That said, I could careless who wrote those documents and if they had selfish motives.

Another point of view about Thomas Paine.

I find it very curious that James Perloff can write his excellent essay as posted on your website * today Who Wrote the Declaration of Independence And Was the Revolution a "Christian War?" = yet fail to mention Tupper Saussy's masterpiece "Rulers of Evil" which covers much of the same ground and was published ~20 years ago

methinks that curious lack has something to do with the opening page of Saussy's book wherein he explained how he became aware of his pedigree ... a descendant of the Huguenots ... staunch Protestants. "Rulers of Evil", presents the Roman Catholic church as the very arch-enemy of authentic Christianity in America, with plenty of evidence - carved in stone monuments all over the Republic - to prove it.

on July 4th, it's worth reminding people that, although the original Liberty Bell cracked shortly after it was first rung, every state in the Union has its own Liberty Bell on the Statehouse grounds ... waiting that glorious Jubilation Day when the nation rids itself of Usury and Liberty will be proclaimed from sea to shining sea.

Hi, Henry. I have never read Tupper Saussy's book, so that precluded my mentioning it. In my full-length article, I cited and credited works by much earlier authors who had vetted the Declaration as Paine's work (Joel Moody, Walton Williams, Joseph Lewis).

The Thomas Paine article is very persuasive. In particular, the stylistic line of argument has to be respected, though Paine was by all accounts by far the most profound thinker among the secessionists. Deism and hostility to the Bible were rampant among those circles, though not all adherents to the Enlightenment were Satanists.

The French philosophes and the world of Diderot's Encyclopedia were admirable milestones in human thought, IMHO. Paine was a part of that cultural milieu. Washington in particular was dismayed by Robison's exposure of the Illuminati when he read about it.

Perloff gold. Wonderful article. Thanks, Henry, for printing this.

This article is taken out of historical context. It assumes Christianity was the same then as it is today. That's quite far from the case.

As I have written you before, I enjoy doing research into my family history and genealogy and I have uncovered numerous ancestors that crossed the Atlantic, all of them with the exception of one came to America to escape Christianity.

My Puritan ancestors were severely persecuted by the Anglican British Crown, having their lands, homes and businesses confiscated simply for adhering to the Puritan faith. They could be thrown into prison at a whim because of it. When they landed in 1620 the 30 years war had been raging for 2 years between Catholics and Protestants which reduced Europe's population by 1/3.

My French ancestors escaped the tyranny of King Louis XIV Revocation of the Edict of Nantes. One direct Huguenot ancestor at 16 came home from gathering firewood only to discover his parents and siblings had been massacred by Catholics. He managed to flee to Holland and then on to the Pennsylvania.

My Swiss ancestors were imprisoned and a direct ancestor beheaded for teaching anabaptism.

Christianity was just as cruel as Islam and I believe ran by Satanists and I don't blame Paine nor Jefferson for being "anti-religion".

The signers of the constitution were very well aware of religious history and therefor granted religious freedom. Thus the Satanists could no longer stir up one religious group against another within the USA.

Just remember you that pervert history, "and if a house be divided against itself, that house cannot stand"

Yes, I'm Christian, but not a Christian of the mid 1700s Europe.

July 4th is "aphelion" day -- or the day that the Earth comes closest to the Sun in its elliptical orbit around the Sun. My understanding is that the day holds some ritual significance to certain Satanic cults, although I've never fully understood exactly what the connection is.

The creepiest thing about July 4 to me, though, is that it's the death date of 3 of America's first 5 Presidents -- John Adams, Thomas Jefferson, and James Monroe. I've long felt (albeit w/o proof) that all three of these deaths were ritual Satanic sacrifices, with Adams and Jefferson actually dying w/in minutes of each other on the precise same day (Monroe died on July 4, about 5 years later).

It's widely speculated that Washington also perished by murder, so that out of America's first five presidents, four of them appear to have died under highly questionable, if not outright violent means.