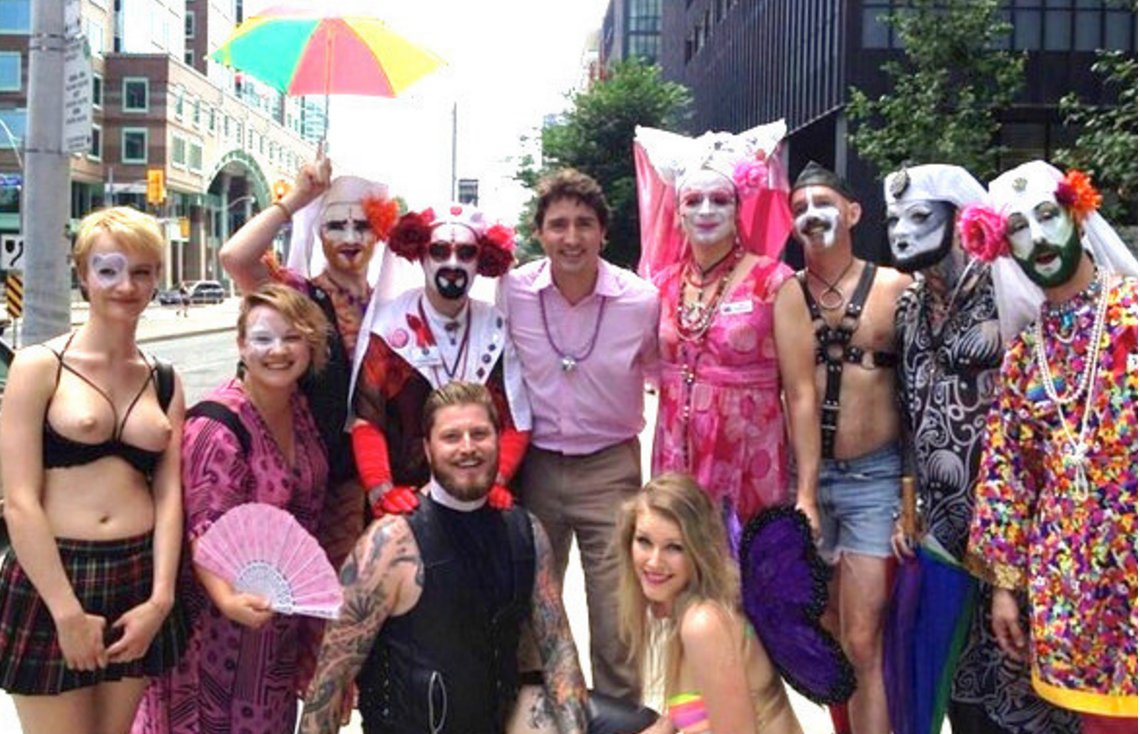 (Canadian Prime Minister Justin Trudeau endorsing the idea that society
should become a satanist freakshow)
Incredible as it sounds, humanity is controlled by the Illuminati (i.e. Freemasonry.) We are being inducted into this satanic cult at the lowest level.
Freemasonry controls and exploits its members by making them
sick. Nowhere is this more evident than the official promotion
of gender dysphoria by government and media. Here toddlers are
groomed by school to become gay or transsexuals.
According to article below, the facts about the harmful effects of deviant sexual practices are being suppressed.
According to Statistics Canada, homosexuals experienced the highest violent victimization rate in 2014, at 207 incidents per 1,000 population, compared to 69 per 1,000 for heterosexuals.
REALity September 2018
Homosexuality and transgenderism are actively promoted by governments, pop culture and public education.  Business owners, such as bakers, florists and musicians, who decline to promote same-sex events are frequently placed in a legally perilous situation by LGBT activists.  Some churches are compromising their traditional teachings in order to be politically acceptable (and thereby promptly experience a loss in church memberships).
This pressure is occurring because the actual facts about the harmful effects of deviant sexual practices are not being disclosed.  Instead, homosexuality and transgenderism are being promoted as being just another "lifestyle choice."  This is truly scandalous and completely unfair to the LGBT community.  Medical ethics require that they be alerted to the consequences of certain sexual practices.
In just the past month, studies have disclosed alarming problems facing homosexuals and the transgendered.  For example, the July 2018 issue of the American Journal of Men's Health, disclosed that nearly half of the men in same-sex partnerships suffer some form of abuse at the hands of their partners.
The study disclosed that 46% suffered some form of intimate partner abuse in the past year, including physical and sexual violence, emotional abuse and controlling behaviour.  It also found that this domestic abuse in male couples increases the risk of HIV infections because victims have little or no control over condom use or when and how the couple has sex.  The authors of the study claim that this is a result of lack of communication about HIV status and HIV prevention, which is common in abusive relationships.  The study also found a strong association with internalized homophobia by the same-sex partners.  This is caused by the individual's stress in struggling with his sexual identity, which leads him to inflict physical and emotional abuse on his partner.
These findings are consistent with a 2015 U.S. Centers for Disease Control survey, which found that 26% of homosexual men, 37% of bisexual men, 44% of lesbians, and 61% of bisexual women experienced rape, physical violence, and/or stalking by an intimate partner at some point in their lives.
According to Statistics Canada, homosexuals experienced the highest violent victimization rate in 2014, at 207 incidents per 1,000 population, compared to 69 per 1,000 for heterosexuals.
Another study, released in July 2018, carried out by the U.S. think tank, National Bureau of Economic Research, indicates that the argument that same-sex marriage will improve access to health care for homosexuals and lesbians was false.  In fact, according to this study, same-sex marriage did not improve the health of such couples, as substance use and preventative care did not change when their relationship was "legalized".
In short, there was no improvement whatsoever in the self-reported health of homosexual and lesbian couples when they legalized their partnerships.
Health Risk for the Transgendered
An alarming study, published in early August 2018 in the Annals of Medicine, reviewed the medical records of 5,000 males who transgendered to female over an eight-year period.  It was found that those who were born male, but became a "transgendered" woman, were twice as likely to have the blood clot condition, venous thromboembolism.  They were also found to be 80-90% more likely to have a stroke or a heart attack.
All males who wish to become pseudo females by hormone therapy should be warned about the serious complications.  They should also be warned about a 2011 Swedish study conducted over a period of more than 30 years.  This study found substantially higher rates of overall mortality, death from cardiovascular disease and suicide, suicide attempts, and psychiatric hospitalizations in sex-reassigned transsexual individuals, compared to a healthy control population.  Even though surgery and hormonal therapy may initially alleviate gender dysphoria (dissatisfaction), such interventions do not seem sufficient to compensate for the higher rates of morbidity and mortality found among transsexual persons.
The stark reality is that nature is nature.  One cannot try to change nature without consequences.  There are always consequences.
Enthusiasm for political correctness by governments and medical authorities is endangering the lives of these sexual minorities.  It is not helping them to normalize their deviant sexual behaviour.
-
Related - Even Gays acknowledge their lifestyle is Toxic
First Comment from Anon-
I'd like to add a little to this. My brother was an apartment manager in Silicon Valley for 25 years. He was quite busy with 450 apartments. After some experience with lesbian couples, he would no longer rent to them (he'd make up any excuse) because they fight like cats and neighbors complained about the noise.
They invariably end up splitting and one gets stuck with all the bills which they can't handle. This leads to costing his boss money for an eviction and unpaid rent.
From what I have seen being gay is not a happy life and a very unhealthy way to live.

Excellent and important article Henry! Another insane thing about transgender is that it is impossible to change DNA. God created us male and female and no amount of surgery will ever change that. It's completely irrational. My heart goes out those who are being deceived and hurt by it.

There was a lesbian couple that lived directly across the street from my aunt. This was some 40 years ago when I was in high school. She would share with my mother how they fought not only verbally, but physically as well. From my understanding most gay couples whether men or women, play the male and female role; the male role being the dominate. The one lesbian would always have bruises upon her face; several black eyes from time to time, and even a swollen lip. Several times the police were over at the residence. So much for the media hype on how wonderful the homosexual lifestyle can be. It is not healthy in all facets of life including mentally, emotionally, and as well as physically. As always you say; sick is considered healthy and normal. We definitely live some very sad times.