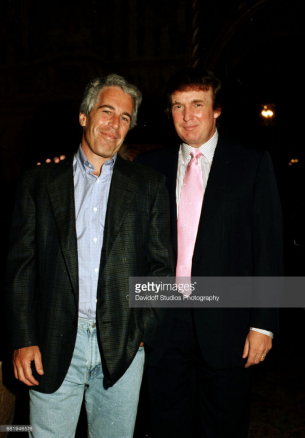 (with Mossad agent and convicted pedophile Jeffrey Epstein in the 1990's.
Many politicians are blackmailed to ensure satanist loyalty.)
Trump's deeds confirm he is a blackmailed agent of Israel.
1. Bombing, invading and threatening Syria
2. Moving embassy to Jerusalem
3. Abrogating Iran Nuclear Deal and sanctioning Iran and companies that do business with Iran.
4. Cutting off humanitarian aid to Palestinians.
Trump's nationalist policies are popular with many Americans but they are a bribe to
ensnare them in a prophesied Armageddon (world war) designed to herald
the return of the "Messiah" (antichrist) and the Satanist NWO. The US is gearing up for such a war.
A Mossad false flag will ignite the powder keg. We are morally compromised by our complacency.
Key Excerpt from Tim Fitzpatrick's "Trump Controlled by Mossad"
All court documents and affidavits are at the base of the article linked just above.
On April 26, [2016] a "Katie Johnson" filed a rape complaint in a California Court against defendants Donald Trump and Jeffrey Epstein[xii]. The complaint was dismissed by a judge due to a lack of plaintiff address, not due to any frivolity of the complaint. Trump supporters were quick to dismiss the charge, however, the lack of address on behalf of the plaintiff could have been due to fear for her life.
"On the fourth and final sexual encounter with the Defendant, Donald J. Trump, the Plaintiff, Katie Johnson, was tied to a bed by Defendant Trump who then proceeded to forcibly rape Plaintiff Johnson. During the course of this savage sexual attack, Plaintiff Johnson loudly pleaded with Defendant Trump to 'please wear a condom'. Defendant Trump responded by violently striking Plaintiff Johnson in the face with his open hand and screaming that "he would do whatever he wanted' as he refused to wear protection. After achieving sexual orgasm, the Defendant, Donald J. Trump put his suit back on and when the Plaintiff, Katie Johnson, in tears asked Defendant Trump what would happen if he had impregnated her, Defendant Trump grabbed his wallet and threw some money at her and screamed that she should use the money "to get a fucking abortion'." 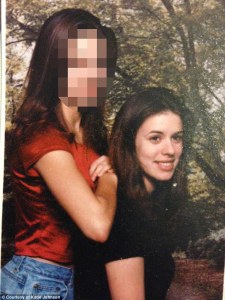 Incidentally, Trump has flip-flopped on his abortion stance. Of course, how could Trump ever ban abortion? What would 13-year-old rape victims do then?
New Jersey lawyer Thomas Francis Meagher revised Johnson's case and filed it in U.S. District Court for the Southern District of New York.
"Plaintiff was subject to acts of rape, sexual misconduct, criminal sexual acts, sexual abuse, forcible touching, assault, battery, intentional and reckless infliction of emotional distress, duress, false imprisonment, and threats of death and/or serious bodily injury by the Defendants that tool place at several parties during the summer months of 1994. The parties were held by Defendant Epstein at a New York City residence that was being used by Defendant Epstein at 9 E. 71st St. in Manhattan [known as the Wexler Mansion]. During this period, Plaintiff was a minor of age 13...."[xiii]
An alleged witness, Tiffany Doe, to the above rape, has come forward. She claims she was paid by Epstein to lure underage girls to Epstein-and-friends parties with the bait of promised modeling opportunities. 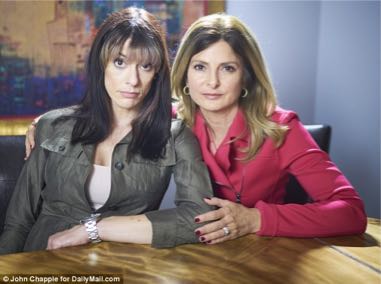 (left, Johnson with lawyer Lisa Bloom)
"It was at these series of parties that I personally witness the Plaintiff being forced to perform various sexual acts with Donald J. Trump and Mr. Epstein. Both Mr. Trump and Mr. Epstein were advised that she was 13 years old."[xiv]
Tiffany Doe goes on in her affidavit to identify a 12-year-old victim of Trump and Epstein as well as to witness Epstein making death threats to the girls should they reveal the abuse. A second witness to the original Jane Doe (previous pseudonym Katie Johnson) corroborates the story of both Johnson and her lurer.[xv] The case remains open.
---
Under duress, Katie Johnson dropped her suit.
Related-
------------ The #MeToo story no one is talking about   (for more context)
--------------------Ex-Chabad Member Exposes Trump Family Cult
--------------https://www.henrymakow.com/2018/04/chabad-trump-family-cult.html
------------------- Mossad's Manipulation of the World
------- Wolfgang Eggert--The Cabalist Plot to Islamize Germany
First Comment from Ken Adachi
I agree with the 4 points you make at the beginning of the article. They, and the Bolton appointment, combine to make Trump look like he's in bed with the JWO's World Conquerors agenda. However, I do not believe that Trump is an evil man, nor an attendee at Satanic murder rituals, nor a rapist of 13 year old children. I think he's playing a dangerous game and wants to keep enough Zionist support in his pocket to get through an 8 year administration. So he makes concessions to feed the Chabad zealots and keep Bibi smiling, but will he go to war against Syria to please the Zio-psychos? I don't think so.
If he does, THEN we'll throw Donald under the bus. But until that happens, he's still a damn sight better than the Mother of Darkness.
You give far too much credence to utterly UNPROVEN allegations leveled against Trump by an accuser whose accusations and credibility are wholly untenable to even the most casual of observers. I read all the articles which you linked to at the bottom of this article and the only person who apparently buys Katie Johnson's story hook, line and sinker is Tim Fitzpatrick. He posted his multi-part Trump diatribe on October 29, 2016, one week before the election; the same month that "Jane Doe" - without listing an address- decided to file a pro se lawsuit against Trump alleging she was raped 22 years earlier.  The timing just being a coincidence I'm sure.

Comments for "Reminder - Trump is a Blackmailed Israeli Agent "

While the article could be easily countered with opinions like Ken Adachi these things can't be debated ...

1 - Trump has filled his administration with Neo-Cons and Zionists like Bolton, Pompeo, and Gina Haspel

2 - Trump has not denied the rumor that Henry Kissinger has become his main foreign policy advisor. Nobody from his inner circle has denied this either.

4 - Trump has kept arming and funding Israel and Saudi Arabia; 2 of the biggest state sponsors of terrorism around the world

Trump is a well-known coke user, a sexually addicted creep who touches up his daughter in public and says the most outrageous things, that, if said by your best friend about his own daughter, would have you reporting him as a pedo.

He is a sexual deviant who hangs around with other sexual deviates of note like Roger Stone - long time Trump collaborator and no doubt sex party attendee together. Stone is a well known admitted group sex aficionado who plays cards regularly with Bill Kristol - numero uno neo-con. John Bolton takes his wife to the same swinger clubs as Stone. Epstein and Trump...need we say more. Trump and Clintons, best friends. Golf together. Their daughters are besties!
https://www.netflix.com/my/title/80114666

These people can be traced back to Kissinger and CFR from 1973 to 79. Stone, Pieczenik, neo-cons. Setting up China. Setting up the Holocaust narrative as a weapon of ideological war. Setting up the penetration of the US high technology industry. Culminating the Pollard affair and Hanson FBI spy etc...And who was with them all behind the scenes? Soviet Russia. Deeply penetrated Israel and the Arab States - to this day. Even more so.

Everyone around Trump is an Israeli Firster. Everyone. He was created by the New York, New Jersey, Atlantic City Jewish Russian mob. Iran Contra crew. Shelden Adelson - Israeli intelligence asset. Lauder...same. Bronfmans. Trump towers with Gill Deezer - Israeli intelligence. Best friends with Netanyahu and 911 operative Guilliani. Trump is not even a successful businessman. Do successful businessmen make their dime playing a role on World Wrestling Federation and reality TV shows?

You need to take the view that as both Russia, China and Israel work together on the $7.2 trillion dollars (over 20 years) Belt & Road Initiative, they have not left out the internet alt media commentators who like their temple shekels as much as anyone else and know which narrative brings you the most money and clicks.

Trump and the Trump hero narrative is like sewerage water to a dying man in the desert. He'll take anything.

Should come as no surprise to anyone who has read this article and the comments section that follows a few Trumper Stumpers would come out of the woodwork. Most concerning is Ken Adachi, one who has I believe a conspiracy website himself. I always thought that conspiracy researchers were critical thinkers; my bad. Troy and Mr. Adachi are what one would call "in denial" Of course they completely have the right to their own thoughts, opinions, and insights. Notwithstanding Trump's arrogance, rudeness and other psychopathic personality defects; Trump fits what I would call the similarities to the old carnival hucksters of old, or the carnies as they were commonly known: They roll into town, pitch their tents, fleece the local yokels with their freak and dog and pony shows. pull up stakes and roll onto the next town.

Al Thompson and RL have it correct; all politicians are the same: all bought and paid for by the highest bidder. The highest bidder being the Israeli government and their agents of influence in this country that have infested all governmental, educational, all news outlets and the entertainment industry.

Not buying it. Two reasons....
1. Lisa Bloom. Like her mom she is an ambulance chasing scumbag that exploits anything she has the ability to.
2. "Please use a condom". Come on man!!! If someone is about to get raped I can't imagine someone wouldn't be freaking and just screaming "stop" and "no" and "don't". Sounds like the chick who ran around with her mattress a few years ago.

Look at what he is doing for Israel.

Good article again Truth must come out , Trump is knee deep in evil and does not care about offending God , Christian he is not along with that other friend of his Putin, as for Adachi comments he is really off , denying trump is capable of doing harm to young and old females , Trump has sold his soul long ago to Lucifer to gain his fame , remember this 27 banks called in there bankruptcy and saved him but they said in the youtube ( we have use for him later ) so today he pays back what he owes to his handlers everything, later he keeps nothing as of so many others like him that died and their wealth is taken away, as it was planned years ago many men and women sold their souls to the devil and fell into hell, remember hell is paved with good intentions !

It seems as though most of the politicians are compromised one way or another. I had my misgivings on Trump as a result of this video, unfortunately, I was right.
https://verydumbgovernment.blogspot.com/2015/10/trump-for-president.html
The government is about a Jewy as it gets as it is completely communist. The Jews own it now.